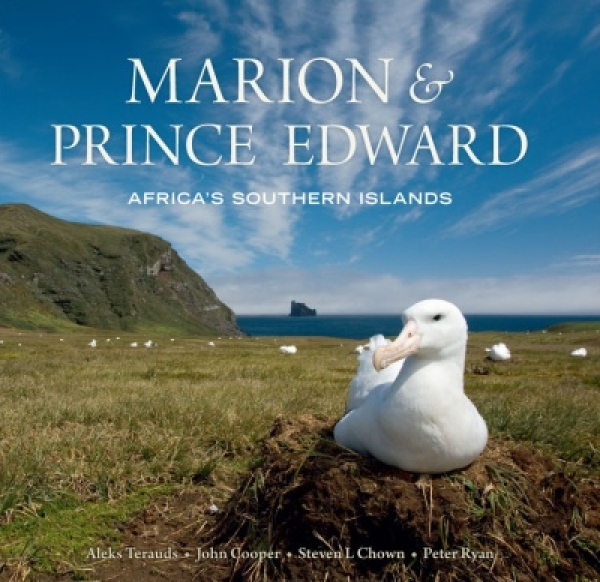 The first coffee-table book – one that is a pleasure both to read and to look at – on the history, beauty and conservation of South Africa’s southernmost territories, Marion Island and Prince Edward Island, has been compiled by experienced researchers who have spent decades studying sub-Antarctic islands.

The book, Marion and Prince Edward – Africa’s southern islands, was written and compiled by researchers at the Centre for Invasion Biology (CIB) at Stellenbosch University (SU) and the Percy FitzPatrick Institute of African Ornithology at the University of Cape Town. The authors are Dr Aleks Terauds, an Australian researcher at the CIB; John Cooper, retired ornithologist and amateur historian but currently research associate at the CIB; Prof Steven Chown, Director of the CIB; and Prof Peter Ryan, ornithologist and author of field guides, at the Percy FitzPatrick.

Together, the four authors have more than eight decades’ experience as researchers on and about sub-Antarctic islands.

The islands lie about 1 400 km south of Cape Agulhas, more or less halfway between Cape Town and Antarctica.

South Africans have been conducting research in the southern ocean for more than 60 years, from the time of the annexation of Marion Island and Prince Edward Island. Ever since, these inhospitable sub-Antarctic islands have served as the valuable outdoor classrooms of many of South Africa’s most authoritative researchers.

Hundreds of leading scientific publications have resulted from this, including illuminating articles on invasive species and climate change in the region.

The publication of this book has now made this research more accessible to the layperson through, among other things, striking historical photos and evocative landscape scenes. The text is also illustrated by oil-paintings by Muizenberg artist Elizabeth Poulsom.

Ryan and Terauds, together with Ryan Reisinger and Ben Dilley, were the principal photographers, collaborating on the book since 2009. Among the other photographers who also contributed are SU researchers Prof Valdon Smith, Dr Justin Shaw and Charlene Janion.

Chown describes the book as the most striking product visually that he has ever collaborated on in his entire career.
The book is the first to be printed overseas by the publishers, African Sun Media, and, according to Managing Director Justa Niemand, ushers in a new phase of continuous growth and challenges for the publication house.

Cooper tells that the book is dedicated to Allan Crawford and Bob Rand, members of the first expedition to Marion Island, who pioneered the documentation of the islands’ natural beauty and animal life.

Crawford spearheaded the first South African expedition to Marion Island shortly after it was annexed in 1948. He compiled the first topographic map of the island and was the only expedition member who published a popular book about life on the island.
Rand, member of the eighth expedition to the islands in 1951/1952, was the first scientist to explore the area and publish scientific articles about it. ‘He was also the first person to walk round the islands,’ says Cooper.

At the time, Rand’s warnings about the dangers of keeping cats on Marion Island as pets fell on deaf ears. The consequent dramatic effect of the cats on, among others, the rich seabird life of the island led to a large-scale extermination project of the cats under Prof Marthan Bester of the University of Pretoria in the 1980s. At the book launch, the authors presented a painting of Bester’s beloved sea lions to him in recognition of his great contribution to conservation on Marion Island.

The book is available at African Sun Media.

More about the authors: