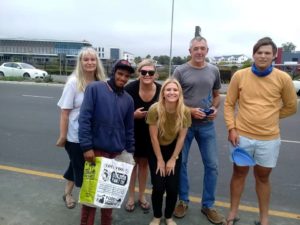 One Sunday morning earlier this month, Bolander received an urgent call from Somerset West resident Elma Pollard (previous environmental correspondent for Bolander, and editor of the Green Times), saying that there was a massive frog migration underway from Paardevlei dam, over the R44 to the Sanctuary dam.

“The cars are driving over the frogs, it’s a massive slaughter, and simply too terrible to ignore,“ said Elma, who promptly leapt into action, and summoned friends and petitioned bystanders to join in the rescue.

Relaying the traumatic event, she described the dreadful “pop-pop-pop“ sound of the little creatures as they were run over, saying that despite entreaties to the local police, they never arrived. “It took members of the Traffic Department ages to arrive, but we thank the friendly traffic officers who eventually diverted the traffic. Until then, we just had to do something ourselves.

“When I started carrying them across the road, another woman arrived, and then more people started helping – eventually they had some of the lanes blocked, but until then, we had to stop the traffic with our bodies,” said Elma.

“We caught hundreds of baby frogs, and released them into The Sanctuary dam. We weren’t sure if it was platannas or leopard frogs… I had my hands full of frogs and never had a moment to go near my cellphone… the scene was too devastating to play journalist. 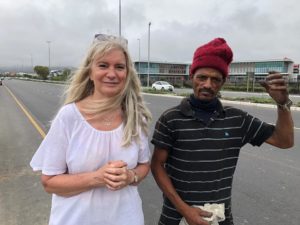 “There was just no way I could leave this to happen. Something that had to be done, and I’m really grateful to all, especially Henry, my ‘right hand man’. Kindness prevailed, and a tiny handful of people rolled up their sleeves to help, but many people were just driving past and laughing at us as though we were nuts.

“It was amazing how we managed to stop all that traffic. It’s truly an indictment on our society, this incident. But now we can rectify it so that good will come of it. Everyone in the Helderberg needs to know how to respond in the future.”

Elma said we need an early alarm system when this happens again, to close that stretch of the R44 for the annual migration, adding that the pictures of so many dead frogs says it all… these vulnerable, highly-threatened common platanna that perished under man’s machines, with only a few caring hearts stopping, until the traffic officials stepped in. 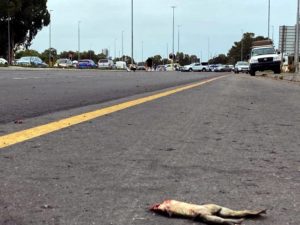 “It takes only one to stop, and others will follow. It’s up to us to create the New Earth… one frog at a time. On Monday, Elma spoke to the Head of Traffic, Nico de Kock, who said in his 30-odd years in traffic, they had never diverted the traffic for frogs.

“So this is truly a first for the Helderberg, but also rather shocking,“ said Elma.

“They migrate over there a few times a year, so thousands of Red List species are being killed each time, and only small numbers get through without help, over six lanes of traffic. 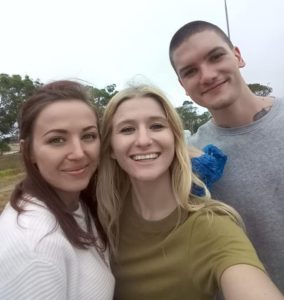 “I’ve asked them to have traffic in both directions diverted next time, as we had to work in and among the cars going in the one direction (they only closed one side). I will have a meeting with the road engineers, to get the frog path re-established. Apparently there was a special tunnel for them before, but when they broadened the road, it was closed up,” she said.

Anyone who has encountered a similar situation is encouraged to send an email to the Bolander for a follow-up story.