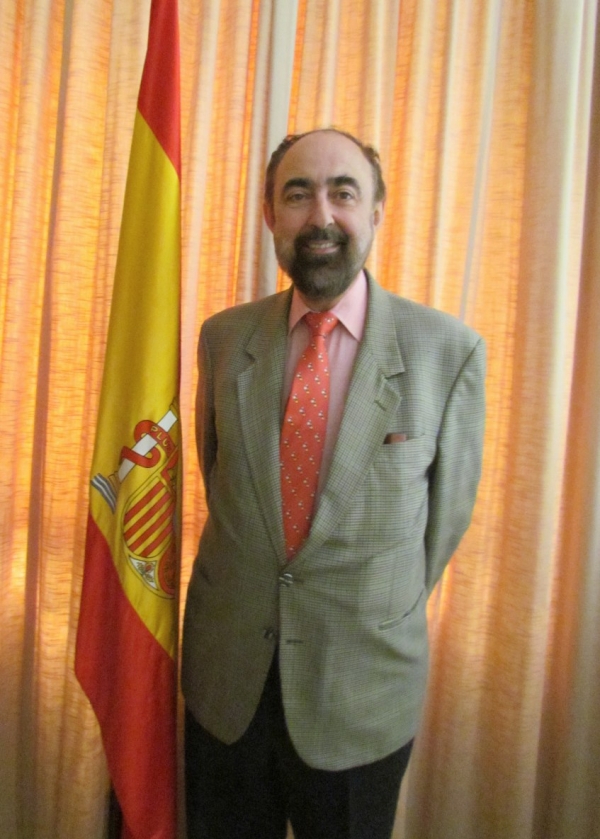 Spanish energy companies are dominating the alternative energy bullring as South Africa gears up to deliver wind and solar energy to power the future of our country.

Elma interviewed the Spanish Consul, Sr. Ignatius (pictured) to find out how this happened:

I am very interested in the presence of so many new Spanish alternative energy companies in SA. How did that come about?

Consul: Firstly, Spain had acquired a lot of experience in this field in the last 20 to 30 years. In wind energy, but especially in solar – photovoltaics and pure solar. The companies were prepared and ready to go abroad with their knowledge and research to launch new projects. We also had a Spanish economic crisis that forced our companies to look for new markets everywhere. Since things were so bad back home, Spanish companies were able to make very competitive offers to start projects all over the world, and that is what is happening now.
So this is a good example of turning a crisis into an opportunity?

Consul: Yes, I have been saying so for the last 3 years that I’ve been here. The crisis is changing Spain into a different country more open to the outside world, pushing our companies to invest and get partners in various countries. These are things that we should have done earlier, but this crisis is providing the perfect opportunity and incentive to finally do so.

Yes, and I’m wondering, why had Spain made these investments in alternative energy over the past 20 or thirty years? Did you experience a shortage of energy?

Consul: That’s a very difficult question. I can give you my personal opinion. We made a political transition in the seventies and eighties from the authoritarian regime to the democratic regime. At that point, we received a huge inflow of foreign investors, which changed the country completely. That gave us a strong base of capital to make investments. Secondly, we had the obsession that we had missed many trends over the previous 200 years, and wanted to make sure that doesn’t happen anymore. So we were ready to jump onboard with any initiative that was a modern one, and that was ecological. I think it’s a mixture of various factors though, not very easy to explain. Also, the Spanish government helped us with heavy subsidies since 1990 for renewable energy companies. This is a very far-sighted policy. Our wind and solar companies received a big push early on from the government subsidy, which gave us a significant advantage over some other countries.

Consul: Well, not only South Africa, but even in Europe. From a technological point of view, after Germany, we are number two in wind and number one in solar.

Well, now we in SA are in the great position where we can also utilize your skills, which we obviously desperately need. Can you tell us a little bit about the presence of your companies here? When did you first come over to SA, and where are you with the projects now?

Consul: This started about 5 or 6 years ago when our companies foresaw that South Africa was going to make a big leap forward in this field. The Government, Trade and Industry Department in Madrid and the Institute of External Trade helped them establish an informal association of Spanish renewable energy companies in Johannesburg. This was to help these Spanish companies come in and get to know the country and its market. These companies were looking around all over the world at this time, and this was to be one of the main places. Big companies like Iberdrola, Abengoa, Acciona and Gestamp came and started to establish a permanent link with South African partners. We have seen the result in the first window and the second window and all the tenders that were awarded last year. In the first window, 27% of the power located in EPC was given to a Spanish company and in the second window 12% to Spain. And in the Independant Power Producer, 20% was given to a Spanish company in the first window, and 20% in the second window.

Consul: Yes, its a lot, because if we’re talking 20% for us, that means the other 80% gets divided up between ALL the other countries: Germany, France, Britain, Holland, China, Japan, America, etc. It was a big, big success.

So Spain has the biggest portion?

Consul: Yes, I think so. And as you can see, all the big companies are here (Iberdrola, Abengoa, Acciona, Gestamp, Amda and Cobra) and they all now have a permanent South African partner. And they are very, very busy now – they have started to build the projects. There are two different things, one is the Engineering Procurement Construction (EPC), and the second is the power producer. The Spanish companies are involved in both of these aspects. So they are busy constructing huge wind farms that you will see all over South Africa in a year or two. They will in fact be installing the latest model of windmills, which is so big that they will have to design and build a special crane to build these mills. Some mills will be large enough to fit 4, 5 or 6 cars in each one.

And will the materials be sent over by boat?

Consul: Some parts, yes. But the idea is to build here as much as possible and use as much local content as possible. Which also dovetails in nicely with the second part of our objective: training up many local people. There is a general lack of skills in South Africa, and in renewable energy there are simply no skills locally. It’s a big drive. We have 15 big companies, and along with them 90 small and medium ones, that will all be involved in bringing the various parts and training personnel. Because the projects are huge – it will take years to be completed, during which we will be training and employing thousands of people across South Africa.

Will you be bringing Spanish people over to train the workforce also?

Consul: We will wherever necessary, but we would like to use what is available here as much as possible. They are in contact with the universities, the Minister of Labour and the CPUT.

So that’s another huge opportunity?

Consul: Yes, it’s a huge opportunity. I think this is going to be very important.

By when will these new systems be up and running?

Consul: I think in 2014 you will already see a few projects working. But I think it would be best if you asked the Spanish companies in a few months’ time directly. Now we must let them work, because they are having a very hectic period getting all these projects off the ground.

Yes, I understand that.

Consul: But it is the first time that Spanish companies come to South Africa, which is going to contribute to the Spanish economic and trade presence here. And this is a sector that has an enormous future.

Consul: Yes, endless energy, and a possibility for green and clean energy. And we are very happy with this development, and this will also help strengthen our relationships from a political point of view. Spain and SA can get to know each other better now, and exchange business contacts, etc.

Yes, and in other kinds of business too.

Consul: Yes, maybe, when the big companies are here, why not?

What will you be doing in terms of public education, motivating and empowering people to move to alternative energy?

Consul: Well, we will focus more on creating and running these wind farms. And I must say, I think that compared to the rest of the world, South Africa is very aware of the need for renewable energy.

Consul: Yes exactly, we have seen enormous rises in the price of electricity here in the last four years, and more seems to be on the way. But all helps to make people aware that it’s not a viable option anymore.

Absolutely, I feel the same about the price of petrol. It makes us more aware of the need for electric cars.

Consul: Yes, and you can see that now that we have completed the second window, things in South Africa are moving. Everyone is concerned, and everyone is interested in renewable energy. And South Africa is lucky, because there is a lot of both sun and wind here.

And we have lots of waves for possible wave energy too. What about the possible detrimental effects of wind energy on the environment? What will these companies be doing to reduce these effects?

Consul: Well, I think that in the projects themselves, there are provisions for environmental protection, up the stream and down the stream. Before we start a project, we look at the environmental impact it would have. And when a project is finished, we try to leave things as much like they were before as possible. The idea is to try to keep the impact as low as possible, and be very conscious of our effect on the surrounding environment. I always say, ‘you can’t make an omelette without breaking a few eggs,’ but of course the mess you make is up to you. So the point is to try to minimise the impact as much as possible. And remember these are all joint ventures with South African companies.

And there will be local people helping with that aspect too.

Consul: Absolutely. The protection of the environment is the leitmotif of their business.

Well, thank you for talking to us.