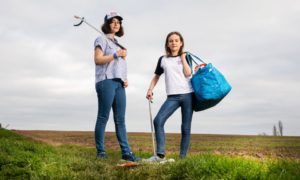 Amy (on left) and Ella Meek: ‘Kids can have a really powerful voice.’ Image: Fabio de Paolo / The Guardian

In May, for the second time this year, more than 1.5 million young people in more than 125 countries walked out of schools, colleges and universities in the biggest day of global climate action ever. Young people have protested en masse before – millions marched against the Iraq war in 2003 – but this child-led uprising is happening with unprecedented momentum on a global scale.

The urgency of their protests reflects the very narrow window of opportunity left to make positive change. We are already living outside the climate parameters that first gave rise to humans, and the world’s leading climate scientists agree that we have only 12 years to limit global warming to a maximum of 1.5°C. Still, most governments are not doing enough to stay within these limits as set out by the United Nation’s 2015 Paris agreement.

The complexities of the climate crisis have become highly politicised, but young people are able to cut through the noise. As Jamie Clarke, executive director of Climate Outreach, explains: “Climate change is the most politically divisive issue in America, more so than gun control and abortion. But young people have the social freedom to say it like it is.”

UK Youth Climate Coalition’s Jake Woodier believes that climate strikes are reconfiguring the political sphere. “Children who historically don’t have a voice in politics are really thrusting their opinions into the public domain,” he says. “We are seeing thousands of incredibly intelligent and articulate children who are grasping the severity of the climate crisis better than adults in power.” Here, seven young people who are doing just that, explain where their passion comes from.