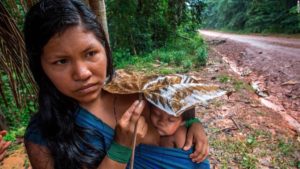 Karuwaniru Waiapi uses a leaf to protect her son from the rain while she walks in the road BR-210 highway on Aramira region in the Waiapi Indigenous Land. Image: Apu Gomes

Brazil’s National Institute for Space Research has reported over 80,000 fires in the country as of Sunday night, with more than half of these in the Amazon region. This coupled with an 85% increase in deforestation this year compared to last, and a rate of deforestation at one and a half football pitches a minute, is threatening the future of the world’s largest tropical rainforest.

The Waiapi tribe are an indigenous people who have lived in the rainforest for decades, protecting the lands and their sustainable way of life.

These indigenous lands had initially been protected by law, but Brazilian President Jair Bolsonaro is now looking to change that, by allowing miners to access the villages. About 13% of Brazil is legally considered indigenous land, mostly in the Amazon. Bolsonaro believes these areas should be open for roads, ranching, farming and mining and that the indigenous tribes should be “integrated” into Brazilian society.

The Waiapi however do not want their way of life to be changed and they are committed to protecting the forests. Their fight has come at a cost though. In July, tribe members said that a group of miners illegally invaded the village of Mariri and killed 68-year-old chief Emyra Waiapi. This is something which President Bolsonaro claimed there “is no strong evidence of”.

Ororiwa Waiapi, 98, the Chief of the Mogywyry and Pyrankenopa villages, is one of the oldest people in the tribe. He says he has no interest in leaving the forest and fears what may come if he doesn’t keep fighting to protect it.

“If we humans misuse this planet, our creator will make a great flood that will melt the planet. There will be great fires, fires that will destroy the planet.”