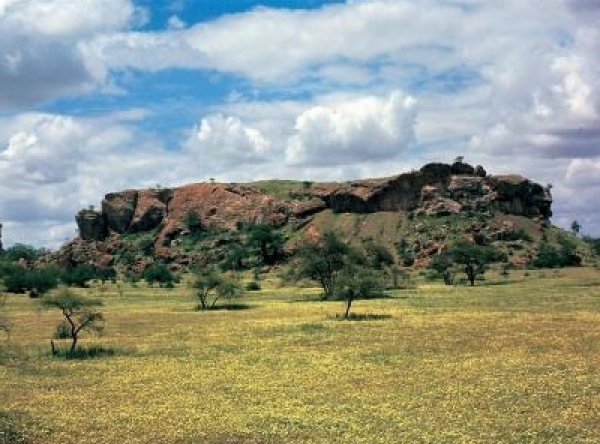 On 8 April 1933 a remarkable discovery was made in the Transvaal. A grave of unknown origin, filled with gold-work, was found on a natural rock stronghold in a wild region. This site was Mapungubwe Hill, which serves as the capital of the ancient Mapangubwe Kingdom, situated on the borders between South Africa, Zimbabwe and Botswana.

This area of a former flourishing Iron Age metropolis on the Limpopo, ruled by an African king almost a thousand years ago, is now under threat.

An Australian company, Coal of Africa Limited (CoAL) has recently been given the go ahead to begin construction of an opencast and underground coal mine. The Vele mine is located 5.6 km to the east of the Mapungubwe Cultural Landscape (MCL) World Heritage Site and bordering directly on the World Heritage Site buffer zone. As indicated in the Vele Mine’s Environmental Management Programme (EMP), 50% of the mine’s west pit will overlap the Viewshed protection area around the Mapungubwe National Park.

An opposition group consisting of local landowners, the Endangered Wildlife Trust, the Mapungubwe Action Group, the Office of the International Coordinator and Greater Mapungubwe Transfrontier Conservation Area (GMTFCA) – on behalf of Peace Parks Foundation – objects to all industrial activity in that part of the very sensitive Limpopo Valley without an approved Integrated Regional Development Plan.
Represented by the Centre for Applied Legal Studies at the University of the Witwatersrand, the group has lodged an appeal to address the serious shortcomings of the Environmental Management Programme (EMP). The appeal will attempt to prevent further damage to this environmentally sensitive and culturally important environment for all South Africans.

According to the Endangered Wildlife Trust serious flaws or lapses in the application include:

South Africa is a water scarce country. The regulatory requirements for water use and conservation are not considered in the EMP. The possible consequences of water pollution as a result of acid mine drainage on the environment; the farming community and other water users are ignored. The coalition will lodge a notice of appeal with the Water Tribunal as a matter of urgency. The coalition has also asked the Minister of Water Affairs to provide written reasons for her decision to issue the water use license to CoAL. They believe that CoAL should not be given a water use license because:

In July 2003, the Mapungubwe Cultural Landscape became one of 24 sites around the world added to UNESCO’s World Heritage List in 2004. It is a natural treasure holding the history of 50 000 years of human development. Numerous rock art sites, Early Middle and Later Stone Age sites, sites relating to the influx of pastoralists into the area and the later arrival of the trekkers are protected in this area. This represents an archaeological record stretching from 500 000 years ago to the nineteenth century. The area contains a network of sites that can inform us about the long history of human interaction in this part of southern Africa, both with one another and with the environment.

A risk exists of a permanent loss of a ‘green’, nature-based tourism destination, which could over time be transformed to a ‘brown’ industrial development area. The resultant impact of this will be the loss of a potential 2 million hectare conservation area existing between Botswana, South Africa and Zimbabwe, which would be able to harness a similar wildlife product to the world renowned Kruger National Park.

Figures such as 30 000 job opportunities are rolled out by mines all the time and often do not come to fruition. The facts are, as quoted from the Vele Mine’s Environment Management Plan, the mine will employ 826 permanent employees resulting in an impact on the direct livelihood of approximately 1 495 people. After 29 years (being the approximate life span of a coal mine), the employment opportunities will end.

In the tourism sector at least 700 permanent jobs currently exist in the core of the Transfrontier Conservation Area (TFCA) whilst the conservative estimated direct jobs to be created within the TFCA over the next 15 years amounts to 3 904 direct jobs. These employment opportunities are sustainable and the intact environment will continue to contribute towards the GDP of the country for the benefit of future generations.

Can the area be rehabilitated?

Mopani veld does not rehabilitate back to its original form. It is also impossible to fully rehabilitate any disturbed area 100% and certainly, with the resources set aside by most mining companies to do this, there is clearly no intention to even try in some cases.

Once water has been used up, it cannot be recreated, once the dust and noise have affected the agricultural farms, their businesses cannot be revived. Once heritage sites have been destroyed, they cannot be re-created. The word ‘rehabilitation’ is thrown around without a full appreciation for what this means or what it entails.

Do we keep making the same errors?

The Endangered Wildlife Trust believes the acid mine drainage crisis facing Gauteng right now is evidence of how decisions taken for the sake of ‘development’ were ill-informed in terms of the long term consequences.

‘We cannot afford to keep making these same errors when faced with new development plans that clearly benefit a few over the short term as opposed to many over the long term. We have to learn from the past! We’re not against mining. But certain areas should not be sacrificed to short term gains at the cost of a sustainable future,’ they said.

‘Investors need to rethink investing in such projects and collectively, we need to increase the pressure on government and various sectors of industry to start moving towards a Green Economy and seizing the enormous opportunities that are open to a developing country like SA, and to demonstrate leadership in this area by filling the niche, which ultimately results in a more prosperous and healthier future for us all.’

The mining at Mapungubwe is just the start with many more mining projects to follow. Anglo Coal has already bought large tracts of land in the area. We need your help to stand up against these mining companies and save our precious environment.