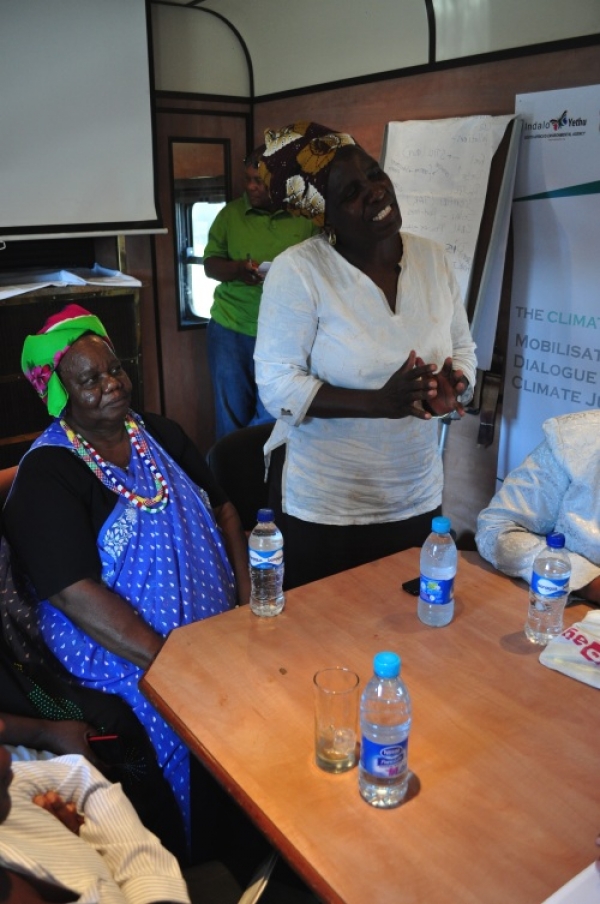 “COP17 comes and it goes and then we are still left with this climate change”.

Deputy Minister of Water and Environmental Affairs Ms Rejoice Mabudafhasi during her visit on the Climate Train frankly admitted this to the scores of people who attended the round-table discussion on the train on the sweltering Wednesday afternoon.

Deputy Minister Mabudafhasi visited the Climate Train in Polokwane in its third week of its month-long journey to COP17 in Durban, encouraging the crowd to return to the traditional way of living and to become ambassadors of climate change.

About 60 dignitaries from the province and the local council as well as a variety of community members and local famers, clothed in their traditional attire,attended her visit to the Polokwane station.

Top of the agenda was a discussion with women farmers about the impact of climate change. After the Minister prepared the ground for the dialogue, Julia Makofane, chairperson of Limpopo’s Women in Agriculture and Rural Development (WARD), shared some of the challenges she has faced due to climate change with the crowd.

“As farmers we are suffering because it’s as though everything is changing. The rooster use to crow at ten to five in the morning and now because of all the confusion in weather patterns, it’s crowing 15 minutes later. The pollution from all the mines are causing us tremendous problems and affecting our crops.”

In the train’s on-board conference carriage, the affected famers and community members openly raised their growing concerns with the Minister and Town Mayor Freddy Greaver, who was seated next to her.

Among them was spinach and chicken farmer Rachel Manale, pleading with the mister to show the community the way forward.

“People no longer want to buy our spinach because it’s an unnatural yellow colour. Our chickens are all dying because of the heat. Climate change is drastically affecting our income and threatening our livelihoods. We need to be more informed about climate change. Our children need to be taught about it at school, so that we know what to do, because we are the ones who are going to suffer the most.”

“Please help us. We are desperate and suffering. We have no more money to start planting again. It’s not our fault that our vegetables are discoloured and that our animals are dying. Tell us what to do because if feels like we are in darkness.”

After hearing the farmers’ testimonies, Deputy Minister turned pensively to the expectant crowd and said:

“It is clearer than ever that climate change has become a reality. I am touched by everything you shared with me this afternoon, because you are the ones who have first-hand experience of the consequences of climate change. Unfortunately our lives have become so modernised and as a result of that we are now facing this crisis. There has been a move away from culture, morals and values. Perhaps if we can alter our behaviour we can return to a more sustainable way of living and start restoring and healing our Earth.” 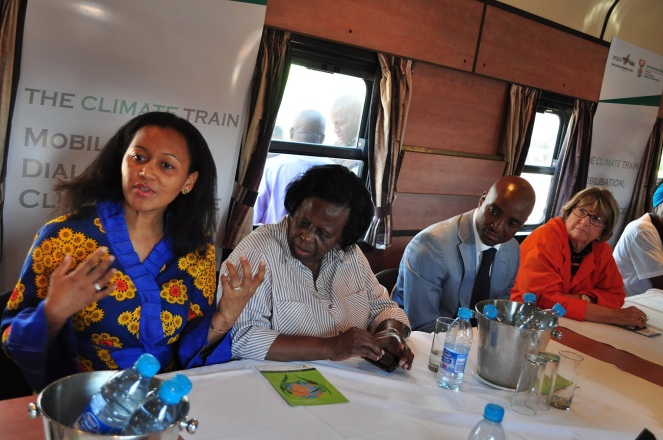 “The impacts of climate change have the potential to reverse our development gains since SA became a free country. We believe it is important for every person in this great nation of hope to start talking about climate change and collectively come up with adaptation and mitigation solutions to respond to climate change,” she continued.

According to new research released by the Third International Forum on Water and Food in Tshwane recently, climate change poses an extensive danger to Africa – altering the water flows in many of the major river basins throughout the continent, particularly the Limpopo Basin.

The new study, which is a result of five-years of global research conducted by scientists from the Consultative Group on International Agricultural Research’s Challenge Program on Water and Food (CPWF) suggest that such alterations could severely hamper nascent attempts to better manage water for agriculture and inflame tensions with regards to the ownership of water.

CPWF also found that rising temperatures and a matching decrease in rainfall in the Limpopo over the coming decades could deliver what they call a ‘one-two punch’ by depressing food production and intensifying poverty.

Black and murky water is good for nothing

Rosina Mhlaki, who has been farming for over 12 years,said she has already started to feel the pinch.

“Wild figs, litchis and mangos were once an important part of our staple diet but because of the irregular rain patterns and chemicals released by the mine waste, our dams are polluted with all sorts of toxins. This black and murky coloured water is good for nothing and washed away all our fruit trees. It’s a scary time to live in, because some of us do not even have access to clean water. Farming is the only thing we know, but now that our land is becoming infertile what are we supposed to do?”

There is no question about it, the climate change situation in South-Africa is dire. The necessity for change and intervention has become more and more apparent in all the communities that the Climate Train has had the opportunity to engage with.