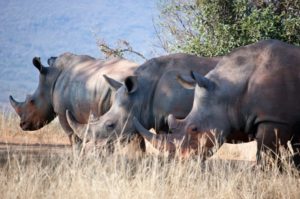 South Africa’s Minister of Water and Environmental Affairs, Minister Edna Molewa has lauded the R232.2 million grant made to the Peace Parks Foundation by the Dutch and Swedish Postcode Lotteries.

Minister Molewa said: “This is the largest single contribution made by the private sector to combat rhino poaching and wildlife crime. We welcome this public-private partnership to help ensure the survival of the species.”

The majority of this funding will be spent on enhancing the existing efforts to protect rhino in South Africa, which hosts 83% of the continent’s wild rhino population.

All other southern African rhino range states have been consulted during the development of this project and they will form an integral part of the strategies designed to save the species.

This special project has been designed to augment the procedures implemented by SANParks in the Kruger National Park and the Mozambican government in Limpopo National Park, both integral to the Great Limpopo Transfrontier Park.

In particular, the emphasis will be on intelligence gathering and on technology applications such as conservation drones and other specialist equipment. It will also include training and capacity building, as well as incentives and rewards for rangers, communities and members of the public who support the conservation of rhino.

Ezemvelo will be supported with similar interventions to conserve South Africa’s second largest rhino population, that of KwaZulu-Natal. In September 2012, Ezemvelo became the first state conservation agency in Africa to trial the treatment of rhino horn to deter the rampant poaching of this species. Thanks to this innovative step, not a single rhino has been lost in the reserves where the treatment was piloted.

Minister Molewa added that: “This very generous donation gives new hope to save our rhino. I believe this grant from the Dutch and Swedish Postcode Lotteries will be the catalyst to turn the tide on rhino poaching and wildlife crime.”

Commenting on the grant, Peace Parks Foundation CEO, Mr Werner Myburgh said: “Peace Parks Foundation was established in 1997 to assist the region’s governments in their development of transfrontier conservation areas. Our biggest supporter in this endeavour has been the Dutch Postcode Lottery and more recently the Swedish Postcode Lottery. We thank the lotteries and their players for this tremendous support to combat wildlife crime and we look forward to working with the southern African governments in ensuring the survival of the region’s rhino.”

View the donation handover ceremony below: