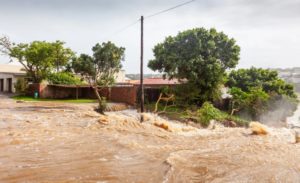 Flooding in the town of Bushman’s River in the Eastern Cape of South Africa. Image: Shutterstock

“The President of South Africa and Chair of the African Union is peddling 20th century solutions to 21st century problems. The President missed an opportunity to rise to the challenges of COVID-19 and the climate crisis, as tens of thousands die as a result of the global health pandemic and over 7 000 people have lost their homes in Southern Africa, following tropical cyclone Eloise.

“The COVID-19 pandemic has shown us that we need to protect the planet so that it will protect us. The President and other world leaders need to show that they have the courage to change a system that is actively working against the planet, and against our own future. A diverse energy mix is not a move away from fossil fuels, on which South Africa is still dependent. The President’s address should have given clear commitment to achieve a rapid Just Transition away from fossil fuels towards renewable energy.

“If there is to be anything vaguely redeemable about the Great Reset, our leaders must declare a Climate Emergency and establish a decent Universal Basic Income. A better world will never materialise if our leaders are not willing to do more than sell false solutions to the richest billionaires in the room.”

This despite the extensive report called Weathering the Storm – Extreme Weather Events and Climate Change in Africa – published by Greenpeace Research Laboratories and Greenpeace Africa.

Here are some highlights from there:

There is every indication that our president needs to address climate change as a matter of top priority.