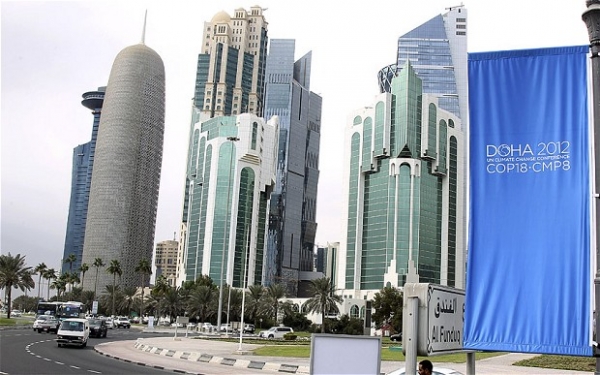 The UN Climate Change Conference in Doha began today with calls for governments to focus on essential tasks ahead of them so that the meeting can deliver agreed outcomes and constitute another step forward in the global response to climate change.

“Climate change is a common challenge for humanity. We must work in earnest for a better future for present and for future generations. We have a precious opportunity over the coming days, and we must make full use of it. Many delegates have stressed the importance of finalizing work on time, and that requires that we all show flexibility,” he said.

Christiana Figueres, Executive Secretary of the UN Framework Convention on Climate Change (UNFCCC),  highlighted an important set of reports published shortly before Doha, which all point to the urgency to act to keep global average temperatures from rising beyond an internationally agreed level of 2 degrees Celsius degrees centigrade, beyond which climate impacts become extremely serious.

Analysis published by the World Bank shows the world remains firmly at risk of seeing temperatures rise towards 4 degrees Celsius by the end of the century, creating devastating effects, if current levels of ambition to curb greenhouse gas emissions are not raised.

The World Meteorological Organization says greenhouse gas concentrations in the atmosphere have reached yet another record high at 390.9 parts per million, with no identified change in the upwards trend. The UN Environment Programme (UNEP) warns that the gap between what is needed in terms of emission reductions to stay below 2 degrees Celsius and what is so far promised by countries is still widening, not decreasing.

However, all reports underline that the technology, the funding and th  policy options to remain below the 2 degrees Celsius goal are already available, provided that governments and societies take the necessary action rapidly enough.

“Expert analysis consistently says that we do have the possibility to keep on track and that to act now is safer and much less costly than to delay. In the last three years, policy and action towards a sustainable, clean energy future has been growing faster than ever. But the door is closing fast because the pace and scale of action is simply not yet enough. So Doha must deliver its part in the longer-term solution,” the UN’s top climate change official Christiana Figueres said.

“Governments have said they intend to work hard to advance their decision texts before the high-level segment, so they can hand over a very limited set of options to ministers and close successfully at the end of next week,” she said.

The UN Climate Change Conference in Doha (26 November to 7 December) is currently being attended by government delegates, representatives from business and industry, environmental organizations, research institutions and the media. More than 100 Ministers are scheduled to attend the high-level segment of the meeting, which begins on 4 December and ends with a decision-making plenary on 7 December. The opening of the high-level segment will also be attended by UN Secretary-General Ban Ki-moon.

As examples of momentum for change which is already building at all levels of society, and to highlight the scope for action, the UNFCCC secretariat will be showcasing so-called “lighthouse activities” in Doha. These are prime examples of public-private climate initiatives in developing countries which have already improved the lives of the urban poor, and which can inspire governments and businesses to do more. Two further pillars of the secretariat’s Momentum for Change Initiative will be launched during the conference – one highlighting the role of women in providing solutions to climate change, and the other drawing attention to innovative approaches to climate finance.

The key objectives that governments have set themselves for COP 18 in Doha:

1.  To ensure the seamless continuation of the Kyoto Protocol as of 1 January 2013

The Kyoto Protocol is the only existing and binding agreement under which  developed countries commit to cutting greenhouse gases. The treaty underwrites international political trust that developed nations remain responsible to lead emission cuts, and it preserves the important accounting and legal systems inside the Protocol as working models which may inform future agreements.

Key issues under the Protocol that need to be decided in Doha include:

2.  To plan the work under the Durban Platform

Given that much more effort will be needed to cut emissions than is captured under the many existing national pledges to cut and limit emissions, governments decided last year in Durban to reach a universal climate change agreement covering all countries from 2020, to be adopted by 2015, and to find concrete ways before 2020 to increase efforts beyond the existing pledges. In Doha, their objective is to plan the work so that:

3.  To complete the Bali Action Plan

Governments decided in Durban at the end of last year to complete the 2007 Bali Action Plan, covering the areas of mitigation (curbing greenhouse gas emissions), adaptation to climate change, and the finance, technology and capacity-building which developing countries require to build their low-emission, climate-resilient futures.

In Doha, governments need to decide which elements of the Bali Action Plan have been achieved and/or implemented, what additional decisions can be taken in Doha and which elements may need to continue to be further addressed.

4. To complete new infrastructure and chart the way forward on long-term climate finance

Governments are presently completing the new infrastructure to channel technology and finance to developing nations and have agreed to move toward the full implementation of this infrastructure and support in Doha. This includes:

key issues on the table

Other key issues and expected results at Doha:

Development and transfer of technology

In some cases, the implementation of actions that reduce emissions could result in negative economic or social consequences for other countries. In Doha, governments will discuss measures to address such consequences in a special forum.

The seven negotiating bodies and groups  meeting in Doha COP – Conference of the Parties. This body is the decision-making body of the United Nations Framework Convention on Climate Change. It meets annually.

AWG-KP – The Ad Hoc Working Group on Further Commitments for Annex I Parties under the Kyoto Protocol. This group focuses on negotiating the further legally-binding commitments for industrialized countries beyond 2012.

AWG-LCA – The Ad hoc Working Group on Long-term Cooperative Action. This group was established in Bali in 2007 to conduct negotiations on a strengthened international deal on climate change, which was to be concluded at COP 15 in Copenhagen in 2009. The work of the AWG-LCA has been extended three times by a year since COP 15 and is now set to conclude in Doha.

AWG-ADP – The Ad hoc Working Group on the Durban Platform for Enhanced Action. This group is to agree a binding international climate change agreement in 2015, to enter into force from 2020. It is also to agree ways to raise the global level of ambition to curb greenhouse gases before 2020 so that the world has a chance of staying below the agreed 2 degrees Celsius maximum temperature rise.

SBSTA – Subsidiary Body for Scientific and Technological Advice. This body serves as a link between information and assessments provided by expert sources (such as the UN’s Intergovernmental Panel on Climate Change, responsible for compiling the world’s government-approved science) and the COP, which focuses on setting policy.

SBI – Subsidiary Body for Implementation. The SBI makes recommendations on policy and implementation issues to the COP and, if requested, to other bodies.