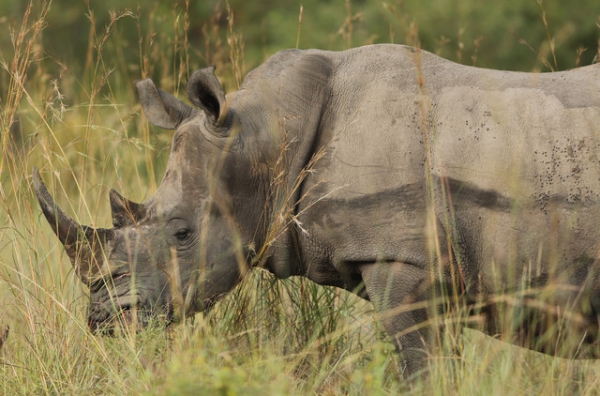 Chissano, 74, is setting up a foundation to work with the government to establish a special anti-poaching force and to help develop commercial projects so local residents can benefit from conservation work. He’s seeking $1.2 million in startup costs and $6 million per year from public and private donors.

“Extreme poverty encourages poaching,” Chissano said in an interview in the capital, Maputo, yesterday, after the official start of his initiative. “Humans have to know they have something to gain.”

A record 790 rhinos have been slaughtered in South Africa this year already. Most of these were killed in the Kruger National Park, where poachers slip through the porous 350-kilometer (217-mile) border from Mozambique. The horn is then shipped to Vietnam and China, where it’s more expensive than gold by weight and buyers believe it can heal ailments and improve one’s libido.

Next door to South Africa, which has the continent’s biggest economy, Mozambique is the world’s 20th poorest nation, according to the International Monetary Fund, providing a large pool of people willing to risk their lives by hunting rhinos.

Mozambican men are hired to shoot the rhinos, risking clashes with armed game wardens in Kruger. Thirty-six have been killed in that way this year, Chissano said.

Rhino population on the decrease

The global rhino population will probably start decreasing by 2016 if the trend continues, Chissano said. South Africa’s roughly 20,000 rhinos represent about 90 percent of the world’s population. Most of the rest is spread across sub-Saharan Africa.

“We’re at a scary place with the level of poaching at the moment,” Jo Shaw, the rhino coordinator for the World Wildlife Fund in South Africa, said in a phone interview from Johannesburg on Nov. 1. “It’s going to be vital to work through transit countries like Mozambique if we’re going to bring this under control. There is lots to improve.”

Rhino horn can sell for as much as $95,000 per kilogram for consumers in China and Vietnam. Those countries must also take stronger action to combat the scourge, Chissano said.

“If the rhino horn can cure, we need to keep it alive,” Chissano said.

Mozambique risks sanctions on wildlife-product exports from the Convention on International Trade in Endangered Species if it doesn’t turn possession of rhino horn from a misdemeanor to a criminal offense by January. The body in March also identified the nation as a “highly important entrepot and transit country” in the rhino-horn trade.

Mozambique in August agreed to coordinate their anti-poaching work with the Chissano Foundation and a month ago set up the National Agency for Areas of Conservation, which will centralize operations from various ministries.

International sanctions would harm Mozambique’s image as a tourist destination, where since the end of a 17-year civil war in 1992 visitors have increasingly flocked to lie on Indian Ocean beaches and feast on seafood, Chissano said.

“Mozambique needs efficient punishment for all those involved in poaching,” Chissano said. “We need imprisonment and heavy fines.”

Chissano served as Mozambique’s president from 1986-2005. He helped establish the Peace Parks Foundation in 1997, which sets out to improve conservation in southern Africa, by opening national borders in some areas.
Great Limpopo

This led to the creation of the Great Limpopo Transfrontier Park, linking Kruger with parks in Mozambique and Zimbabwe, which jointly cover 37,572 square kilometers (14,507 square miles), or nearly the size of the Netherlands. The agreement allows visitors cross-border access at some points in the zone.

Only 67 rhinos were poached over the past seven years in Mozambique itself, most of which had wandered across the border from Kruger, according to Cites. About three elephants are killed every day in Mozambique’s northern Nyasa reserve, where the 13,000 pachyderms make up 80 percent of the nation’s population of the animal, according to the Wildlife Conservation Society.

After a number of measures such as deploying the army in Kruger failed to slow the epidemic, South Africa’s cabinet in July decided to push for Cites to legalize the trade in rhino horn, allowing it to regulate the commerce.
Market Forces

South Africa’s Department for Environmental Affairs said in a July report that said some experts “argue that in a market where rhino horn could be traded freely, market forces would automatically drive horn prices down, obviating the need for syndicates to face risks associated with poaching.”

Along with buffalo, elephants, leopards and lions, rhinos, which weigh as much as 4.5 metric tons, are part of the so-called Big Five group, which attract tourists. Tourism contributed 84.3 billion rand ($8.3 billion) in South Africa last year, according to the government. The industry employs 4.5 percent of all working South Africans.