In 2012, local production was 16,4 million litres, a 23% increase from 2011, and Fairtrade Label South Africa expects this number to increase for 2013. In fact, about 5% of the country’s local wine grape production is Fairtrade certified.

The current 26 certified producers extend over 72 farms and employ 2,728 farm workers. Including their families and communities, Fairtrade SA estimates that the sale of South African Fairtrade wine is a key contributor in the improvement of living and working conditions for over 14,000 people.

Fairtrade as a movement started in the coffee and banana industries in Africa. The aim is to enhance the quality of farm workers’ lives by paying a premium for the crops they cultivate and harvest. Premiums go towards funding projects decided by farm workers.

For each bottle of Fairtrade Wine sold, 70 cents of the retail price goes back to the farm workers. Earthbound and Place in the Sun are two South African Fairtrade wine producers that are showing tangible and empowering results.

A fair Place in the Sun

Happiness is for everyone. That’s the ethos that drives Distell’s fine wine division Cape Legends and its Fairtrade-accredited wine brand, Place in the Sun. More than a range of wines with a do-good sticker, Place in the Sun is making a real, positive difference in the lives of people who contribute to its excellence.

Since the launch of Place in the Sun in 2011, premiums have generated R1,5m for the Nietbegin Joint Body Trust that administers the funds on behalf of the workers. The workers decide on how the funds are to be spent and new projects are identified each year.

At present, Fairtrade premiums fund early learning projects; tuition and school uniforms at schools of choice amongst farm workers (formerly children would have had no option but to attend local farm schools); the university education of two nursing students; stepped up sporting activities, such as the improved rugby field for their Blue Swallows rugby team; and the creation of vegetable gardens to improve nutrition. Workers receive seeds and plants to cultivate at their homes.

The latest initiative identified by workers was the need for spectacles. Eye tests were conducted on all workers and their families, including retired pensioners, and 54 pairs of glasses were commissioned, with each person choosing their preferred style of frame.

The main recipient of funds, however, is a savings account intended for housing. Currently, workers reside in houses on the farm – a tidy row on a vine-covered ridge. “It has been a dream the workers expressed initially, and subsequently the concept of an ‘agri-village’ was born,” explains farm co-owner Piet Carinus.

“Under the State-sponsored housing scheme, when a qualifying person receives a house, the building is very basic. With the realisation of the agri-village, the joint body wants to use the money to ensure better living conditions through possibly enlarging the buildings and making additions such as plastering the interiors and adding power points.” 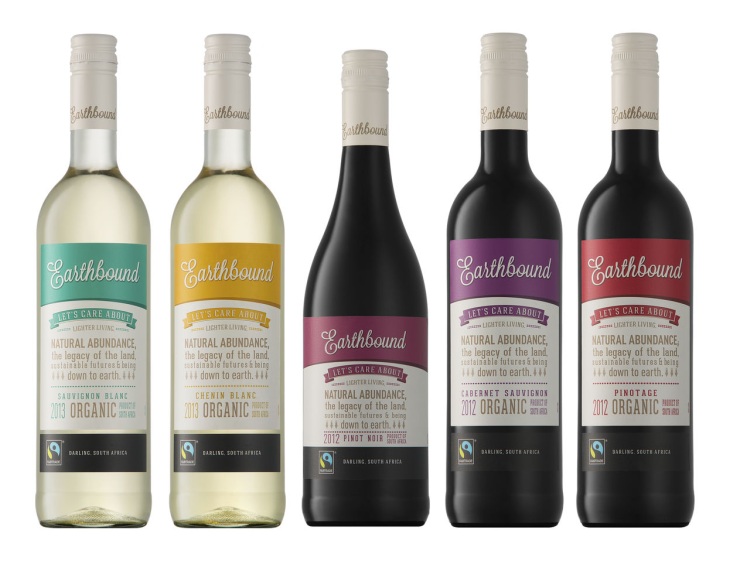 Earthbound is the only one of South Africa’s 20 Fairtrade wine producers that is also certified organic. It is a joint venture established between Distell, entrepreneurs and the local Mamre community trust, and is one of the premium brands in the Cape Legends stable – the fine wines division of the Distell group.

The rise of Earthbound began with the acquisition of the Darling farm by the then Stellenbosch Farmer’s Winery (SFW) in 1998.

“SFW needed a farm in a cooler area,” recalls industry veteran Hannes van Rensburg, Group Manager at Nederburg Wine Farms. “The decision was soon made to direct the farm, called Papkuilsfontein, towards organic wines, and when management saw that it worked well, 172ha were converted to organic farming.”

“In the beginning, there was still uncertainty to some extent,” recalls Farm Manager Hennie van der Westhuizen. “Now everyone has been through the annual audits. The workers can appreciate the benefits and see that money is raised for projects that improve quality of life.”

The farm now has subsidised home-and-work transport for workers and training. Residents who reside on the farm have three-bedroom houses, solar power-heated warm water with the backup of electricity. There are also group projects like fridges installed in premises with communal access, a year-end braai and the beginnings of the process of building a community hall which make Fairtrade real to Earthbound’s workers.

The Joint Body chairman, a tractor driver on the farm, is currently receiving computer training.

“Raymond Korah is a permanent farm worker and hasn’t ever had the opportunity to work with or learn how to use a computer,” says Van der Westhuizen. “He has had various training courses, and has great potential. We foresee him rising to a supervisory role.”

Another success story is that of Graham Daniels, a child of farm workers at Plaisir de Merle, which is also one of the Cape Legends wine producers.

“We needed trainees in the company and he qualified. We sent him to Worcester College to train in farm management for two years and during college holidays he had to work on the farm. Once qualified he continued to work on the farm to gain practical experience before being promoted. The company paid for training and accommodation, and he received a salary. He is now an assistant farm manager at the Earthbound farm.”

During the previous harvest Daniels joined a colleague, also in the programme, to work in Burgundy, France. The trip was preceded by 12 months of classes at Elsenburg Agricultural College.

“There’s a good spirit among everyone on the farm and we are very positive in everything that we do,” says Van der Westhuizen.

The widespread recognition of the Fairtrade emblem that is displayed on every bottle means when buyers are in South Africa, they’re keen to see the results of Fairtrade for themselves. Sometimes, this means a visit to the farm.

“The Minister of Housing viewed the houses before they were occupied,” says industry veteran Hannes van Rensburg. Group Manager of, Nederburg Wine Farms, who has been closely involved with Earthbound since its inception.

“Being the only Fairtrade and organic wine available locally, Earthbound is a South African exclusive. We are very excited about what this means for domestic Fairtrade wines, for both the local and international markets”, says Arianna Baldo, Business Manager of Fairtrade Label South Africa.

“More importantly, this converts into a range of additional benefits for the farm workers, their families and communities. In 2012, a total of over R8,100,000 was received by Fairtrade certified farms in South Africa and 165 projects were implemented”, says Baldo, who is also the International Fairtrade Wine Co-ordinator.

This year’s Fairtrade Week celebrates Fairtrade’s powerful partnerships with African producers, businesses, institutions and consumers that collaborate daily to unlock the power of equality and sustainability in Africa. Included in the agenda are product launches, a business breakfast revealing new research on sustainability, social media competitions and the launch of THE POWER OF YOU, an innovative initiative that brings together likeminded organisations working in the field of sustainability, to inspire South Africans and show them their power to change the world through their everyday actions.