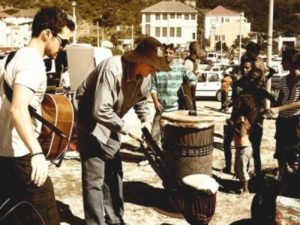 Once a year the Surfrider Foundation Europe launches clean-up weekends at lakes, rivers and beaches to raise awareness about pollution and littering. The initiative was created 20 years ago by surfers for surfers and water users. As part of the Surfrider Foundation‘s International Ocean Initiatives campaign, a beach clean-up was held at Muizenberg on Sunday the 27th of March 2011.

‘The aim is to get as many people involved to clean as many places as possible,’ says Patricia Issertes, a French oceanographer who organised the Muizenberg clean-up. ‘This year was my second Ocean Initiatives clean-up. We started last year by cleaning up Long Beach with a few friends. This year we aimed to go bigger and it did! A lot more sponsors, people and especially kids got involved.’

Regarding the waste found on Muizenberg beach, Issertes said:

‘We mainly found cigarette butts and small pieces of plastic. We found tons of them, it is scary.’ 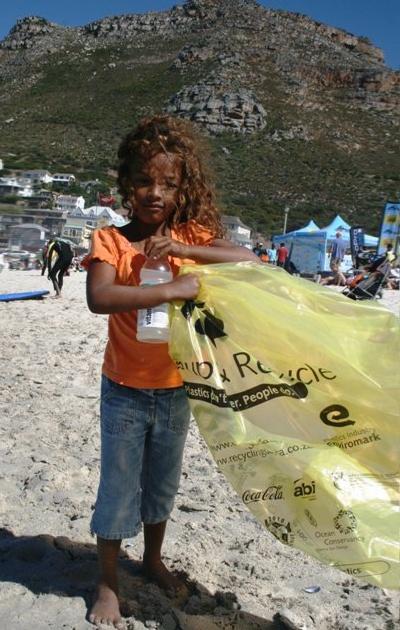 Even though the beach holds Blue Flag status and a lot of effort is put into keeping it clean, the cleaners could fill a bakkie with trash within an hour. According to Anton Louw from theBOMBsurf, a lot more rubbish was found just outside the Blue Flag limit and the contrast was shocking. He also believes more attention should be paid to educating kids about pollution.

‘Initially some kids would pick up kelp or shells and think it was trash because it was old or something to that effect. It’s all about education! Teach a kid and he will teach his parents, that’s how it works.’

At 08:00, prior to the official beach clean-up, Surfing South Africa hosted the Development Surfers’ Interclub Tag-team Challenge (paddling) thanks to funding from the National Lottery Distribution Trust Fund.  The best of youth development clubs such as Isiqalo, Palama Metsi, SurfShack and WaveCrush competed against each other, with Palama Metsi finishing as the top team. According to AfriOceans Conservation Alliance an ‘infectious enthusiasm’ was present on the perfectly sunny and wind-free Sunday. 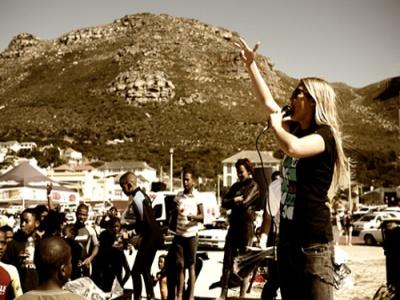 The brightly clad surfers battled it out in the 2-3 metre waves on their rubber long boards while the supporters cheered them on: ‘Come on, paddle my bru!’

Afri-Oceans believes that watersports, especially surfing offers a gateway or window of opportunity for youth to become empowered to stand up, in spite of their social and cultural backgrounds, to be the ‘Voice of our Oceans.’ 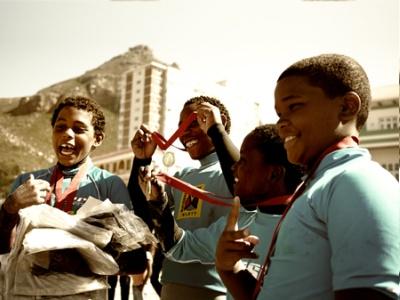 ‘The event was a great success and all the kids had a great time. Everyone collected loads of rubbish and I got them involved in my acoustic set afterwards with recycled rubbish – we made shakers out of empty bottles and we even turned a piece of plain plastic piping into a flute on the last song! The kids were blown away by that,’ he says.

Gear and spot prizes were also won during the day, sponsored by Ocean Minded, Derevko, Hooley, and Vitamin Water. Anyone can setup their own beach clean-up through Ocean Initiatives. Issertes plans to do the event annually and really get the initiative going in SA.

The beach was left spotless after the clean-up, showing commitment from South Africa’s youth. Read more on the Afri-Oceans blog.