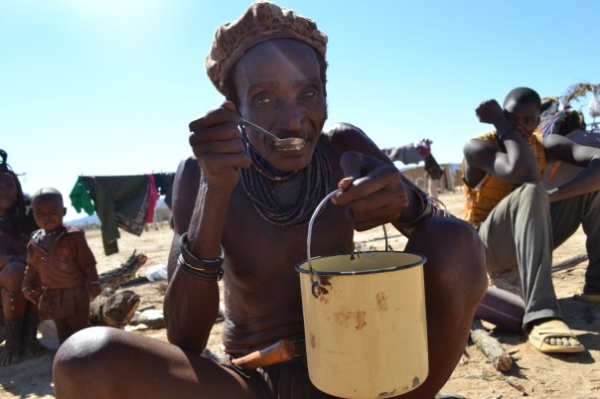 Desert-hardy Namibians, overwhelmed by the worst drought to hit their country in 30 years, are surviving off wild fruits with no harvest in sight until March 2014, the International Federation of Red Cross and Red Crescent Societies (IFRC) said as it launched an appeal on Monday.

The government of Namibia, the driest country in sub-Saharan Africa, declared a national emergency in May. Drought has resulted in crop failure and livestock deaths across the tiny country of 2.1 million people.

Maize production is 34 percent below average and over 330,000 people, or 14 percent of the population, need immediate food aid.

“A lot of the people I met had nothing in their food stores, absolutely nothing,” said Hanna Butler of the IFRC, who recently visited Kunene, one of the worst hit regions in northern Namibia.

“People are foraging for wild fruits … Everyone just told me: ‘I have nothing. I’m not sure what’s going to happen’.”

The capital city, Windhoek, received just 166 mm (6.5 inches) of rain between October and April, less than half the average for a rainy season of 355 mm, local media reported. It is the lowest figure on record since 1981/82.

The crisis is set to worsen – Namibia only has one harvest a year and the next is not due until March 2014.

“The situation will rapidly deteriorate,” said Butler. “The shock is yet to happen.”

Already, people are showing signs of malnutrition, she said, and they complain that wild fruits are growing scarce.

Eight out of 53 malnourished children admitted to hospitals in Kunene in the first six months of the year have died, according to the Namibian government.

“We often fail to see the tipping point in slow disasters like drought,” Alexander Matheou, IFRC representative for southern Africa, said in a statement.

“If we fail to act, malnutrition, especially in newborns, will have an irreversible effect on health and brain development, and in some cases, will take the child’s life.”

Crisis takes on a regional dimension

The crisis is also taking on a regional dimension as neighbouring Angola has also appealed for help to cope with a second year of failed rains. Relief agencies estimate that between 640,000 and one million Angolans have been hit by the drought.

The Angolan provinces of Cunene and Namib, which border Namibia, have experienced the driest first quarter in 25 years, the ACT Alliance, a coalition of church groups, said in a June 26 appeal.

“Both Angola and Namibia are experiencing a slow onset emergency which needs to be addressed urgently before a full disaster unfolds,” it said.

People are migrating in both directions across the border in search of help.

“A lot of people (in northern Namibia) told me that they are heading towards Angola because they can get more money to sell them (their cattle) in Angola if the cattle can make it,” Butler said.

Ironically, the Namibia Red Cross is still responding to floods that hit the Caprivi region in March.

“It’s the two extremes. It is droughts and floods in Namibia. People are dealing with both,” said Butler.

Scientists predict that global warming will lead to more extreme weather. There has been a steep rise in climate-related disasters since the middle of the 20th century.

The IFRC is appealing for $1.3 million for Namibia to be spent over 12 months.

A Himba man eats maize meal in Opuwo, Kunene, northern Namibia. Drought across Namibia means 14 percent of the population need immediate food aid, and malnutrition is worsening in children. Kunene is one of the worst hit areas. Photo by Hanna Butler, IFRC.