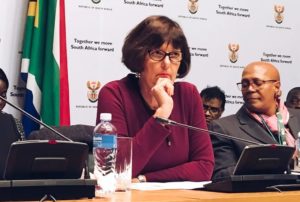 The work of building a sustainable and environmentally sound growth path is the work of the nation as a whole amid an “unprecedented threat from climate change”, Minister of Environment, Forestry and Fisheries Barbara Creecy said.

Speaking to the media ahead of delivering the Department of Environmental Affairs’ budget on Thursday, Creecy said more than two million South Africans are directly dependent on natural resources and the natural environment for their income. These people support eight to ten people each, underlining the true significance of the country’s natural resources to its economic and social well-being.

“The underpinnings of our economy and our social fabric are facing unprecedented threats from climate change, environmental degradation and the loss of our biodiversity,” she said.

She said all spheres of government, business, organised labour and civil society are required to come together in a joint action to combat climate change, environmental degradation and the loss of biodiversity.

She said in line with that, the second draft of the Climate Change Bill – which aims to create a framework to implement a just transition to a climate-resilient and lower-carbon economy and society – is currently being discussed and debated at National Economic Development and Labour Council (Nedlac).