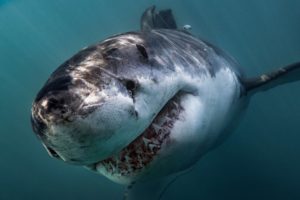 “The disappearance of Great White sharks from our seas in recent times has had a devastating impact on the shark diving industry and caused immense disappointment to the hundreds of tourists who visit our shores to see this great predator,” says DEFF Min Barbara Creecy. Image: Steve Woods

The Department of Environment Forestry and Fisheries (DEFF) recently released the official report on the National Plan of Action for the Conservation and Management of Sharks (NPOA-Sharks) in South Africa.

In May 2020, following public concern about shark populations along the South African coast, the Minister of (DEFF), Ms Barbara Creecy, appointed an Expert Panel to formally review South Africa’s (NPOA-Sharks) while keeping in line with the International Plan of Action for the Conservation and Management of Sharks (IPOA-Sharks) and the Food and Agricultural Organisation (FAO).

The Panel scrutinised 60 documents over three months and held eight virtual meetings to review the NPOA-Sharks. The Panel reviewed the 62 actions of the current NPOA-Sharks, released in 2013, and provided scores and comments for each action.

In her delivery Minister Creecy (pictured below) said that, globally, information on population status and impact of fisheries on sharks is sparse, as sharks are mostly caught as bycatch and the management and conservation of sharks is hindered by a lack of data, “illegal activities, gillnetting and a general neglect of protection activities has seen 14% of our sharks and rays in South Africa become endangered or critically endangered. The sawfish is locally extinct, but this should serve as a lesson of what can happen to other species”.

She also said that World Fisheries Day should serve as an annual reminder of how blessed we are with natural resources, but equally, a reminder that we need to use them sustainably and protect them. 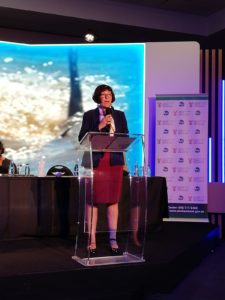 “Sharks’ life history makes them vulnerable to the multiple and emerging threats – climate change, illegal gillnetting, acidification and more. We need to determine and implement strategies that have a sustainability and precautionary approach, with special attention given to threatened species. We need to ensure there is an optimum balance of consumptive and non-consumptive use – maximising benefits and lowering impacts. We need to plan, have clarity on the action and ensure that these actions are measurable.”

The report provided five specific recommendations for immediate implementation: to ensure effective communication and coordination from science to policy to achieve the actions of the NPOA-Sharks, to develop and implement measurable indicators to track the progress and completion of actions, to incorporate ecosystem effects of fishing and spatial management measures in future plans, to strengthen the focus on addressing illegal, unregulated and unreported fishing and improved monitoring, surveillance and enforcement of compliance, and to integrate and modernise data collection and storage to improve access for future assessments.

Speaking on the report, Ms Sue Middleton, Acting DDG Fisheries Department said, “This report is comprehensive and honest, and acknowledges both the challenges and accomplishments of South Africa. It also gives us the opportunity to improve where we have shortcomings.” 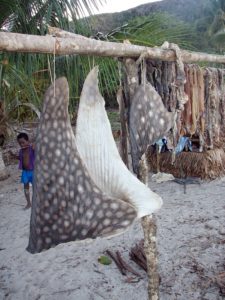 One way that humans hunt sharks is by using a practice called shark finning. This is the process of slicing off a shark’s fin and discarding the rest of the still-living body, often by dumping it back into the ocean.

Dr Jennifer Olbers, scientist at the WILDTRUST, said that she was pleased with the addition of measurable indicators in the revised NPOA rather than targets as she felt that this is a progressive step for the department.

Dr Olbers also welcomed the inclusion of effective communication and coordination from science to policy and said that this will open the channels for scientists to assist scientists and others within DEFF.

Speaking on the need to strengthen the focus on addressing illegal, unregulated and unreported fishing and improved monitoring Dr Olbers said, “This for me was a refreshing point, the recreational fishers seem to always stay under the radar because their perceived impact is minimal when compared to the industrial fisheries sector.” 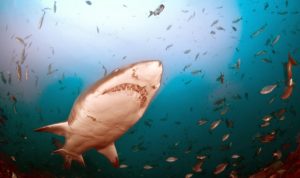 The ragged-tooth shark also known as a spotted ragged-tooth is currently listed as vulnerable. This species is found on the southern and eastern coasts of South Africa and aggregates in large numbers on coastal reefs.

With regard to developing best practice release protocols for sharks and rays, these should be incorporated into permit conditions where appropriate, she suggests that there should be plans to implement angling clinics within Marine Protected Areas (MPAs), which she and her team are already in talks about.

Charlene da Silva Scientist: Shark Resources Research (DEFF) closed by saying, “Improving the science will see the improvement of the management of the species.”