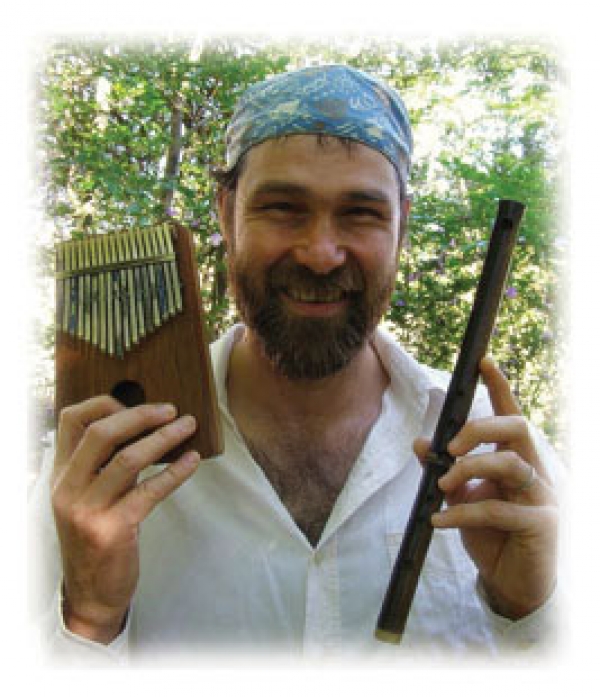 I am walking with John Roff up the slopes of a krans on the Hilton College Estate, some 600 hectares of wild land that lies between the school and the Umgeni River where giraffes, zebra, buck and blue wildebeest roam. John is the environmental education officer of the school. I have come to the College as writer in residence and John takes me into the wilderness so I can experience the wonders and intricacies of creation.

This is his passion, his calling. John reminds me of the visionary poet, William Blake, who sees ‘a world in a grain of sand and a heaven in a wild flower.’

His eyes have that distant yet intimate look of one who traverses the veld to locate and celebrate the buck camouflaged beneath a tree. We stop to observe a rock with a star shaped lichen pattern. We move aside, removing our shadows so the sun falls on this spot. On he walks in awareness and stoops to interpret the sand where a snake has crossed our path. John bends to pick up an ironstone chip.

‘This could have been brought here around 700 AD for smelting iron.’

This man went to California to observe the giant redwood trees. His own writing is also a celebration of these mysteries.

He writes, ‘yet each seed oat-flaked sized, has all the information for another ancient grove.’

He sees also into the invisible world. Once in a cave in Drakensberg, he became aware of the presences of the original Bushmen inhabitants and that he was sharing space with them.

Make music with your hands

John introduces people to spaces in nature through music and poetry. One of John’s aims is to bring out the creativity of people in response to the creativity in nature, for when we are connected and become passionate, we begin to care. In his backpack John carries musical instruments made from pipes and old materials. He chooses local bamboo and burns holes for the stops and mouthpiece. He has no formal music training. He is one who introduces us to nature and through nature to the Divine. And so he interprets these cosmic languages so we can hear them and respond. His musical instruments include kalimbas (thumb pianos) and homemade flutes. Also an ‘ozone’ drum made of a discarded fridge tank. His instruments are based on pentatonic scales so any combination of notes will offer melody.

John loves the poetry of Hopkins, Whitman, Tagore among others. He has absorbed snatches by heart. As we stop he recites ‘Kingfishers catch fire, dragonflies draw flame.’ (Hopkins)

He places the sounds and words in spaces in nature so they become ritualised in our imagination. So we remember where we have been and what we have witnessed. In a sense he acts as host connecting us to our surroundings. Shortly after he arrived here, John identified a new species of spider. The custom is that he gets to name it. Yet John so far has left the spider unnamed for names are tricky and can denote ownership and take away mystery and wonder.

‘On wilderness trips when people ask for the name of a tree I often do not give the scientific one, for then people stop asking questions.’

John rather allows the person to observe what the tree might be doing and to come up with their own name. The he will add something of significance, something that will remain with the one who has connected to the tree or plant.

We stand in a grove of paper bark thorn trees. John speaks of how the bark is sacrificed in a fire to preserve the trunk.

He shares, ‘I love being in places where God has just been.’

He points up the slopes towards a tree on and neighboring conservation area.

‘See that tree? We married under its branches.’

John has compiled a 36 page handout, Bridging the Gap, a handbook for environmental interpreters and educators – ideas and activities for making meaning of our environment. He’s moved by passion which informs his subtle interpretations. He allows those he escorts to translate the hidden meanings and the stories and messages that surround us into a language that they can understand. John believes that when we are touched by nature around us, that is when we open to connection.

That is when the eye of our eye is opened and with Wordsworth, we ‘see into the life of things.’

If a guide gushes out information it’s like trying to drink from a fire hydrant. So rather than name, he asks us to observe this living tree and how it moves and contributes to belonging and interconnectedness.

Through his musical instruments he asks us to copy or take in the sounds and sights in creation – wind, insects, mountains and water – and to use different musical notes to emphasise different kinds of experience. We move along under bare branches.

‘This little flute of a reed thou hast carried over hills and dales and hast breathed through it melodies eternally new. At the immortal touch of thy hands my little heart loses its limits in joy and gives birth to utterance ineffable’

As we leave John recites from Walt Whitman’s Leaves of Grass:

‘When I, sitting, heard the astronomer, where he lectured with much applause in the lecture room, How soon, unaccountable, I became tired and sick Till rising and gliding out, I wandered off by myself, in the mystical moist night air, and from time to time looked up in perfect silence at the stars.’

John believes we are called to respond poetically, musically and rhythmically to creation. I leave the reserve richer for his insights, interpretations and generous sharing.