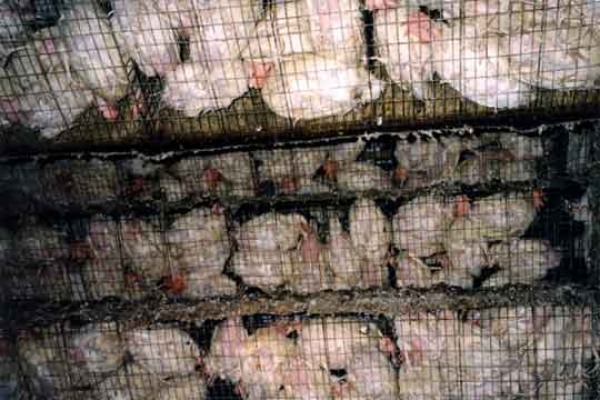 Factory farming is cruel, wreaks havoc on our bodies and accounts for more greenhouse gas emissions than all transport combined. Yet, in our profit-driven society, these methods still remain.

The majority of farm animals in the U.S. are reared intensively in battery cages, overcrowded chicken sheds, sow crates, zero-grazing dairy systems, cattle feedlots or veal crates. The animals are forced to grow super-fast, pushed to their physical limits in the quest for more cheap meat, milk or eggs. At the end of their brief lives, millions of animals are transported over great distances in terrible conditions, only to be slaughtered at the journey’s end.

Farm animals are sentient beings, capable of feeling pain and suffering. Yet industrialized agriculture treats them as little more than meat-, egg-, and milk-making machines. Sadly, there is no federal law in the U.S. that protects farm animals from cruelty, no matter how abusive. The welfare of animals often loses out to the economic interests of large corporations that promote, and profit from, this farming method.

Environmental impacts not to be left out

Intensive animal agriculture is more devastating to the natural environment than any other human activity. According to a report published by the United Nations Food and Agriculture Organization, animal agriculture generates more greenhouse gas emissions than all transportation vehicles combined.

In traditional farming, animals such as pigs, chickens and cows live in much smaller groups than they do on factory farms. They have space to move around, and are able to express their natural behaviors.

When animals are kept together in unnaturally large numbers, the amount of waste they produce can become an environmental health problem which is dangerous both for the animals and for people living near the farms. Mismanagement of manure leads to pollution of surface water, ground water and soils.

The risks to human health from intensive farming are well-documented and relatively well-known in the developing world. People are increasingly suffering from chronic diseases that are connected with eating too much of the wrong sorts of food or from diseases transmitted from animals to humans (zoonoses).

A typical American diet today is dominated by animal products laden with saturated fat, cholesterol and hormones. These are diets that promote obesity, diabetes, several forms of cancer, and other chronic diseases that kill nearly 1.4 million Americans annually according to the U.S. Centers for Disease Control and Prevention.

Playing a role in poverty

Worldwide, nearly a billion people live in severe poverty and suffer with daily hunger and deprivation. Intensive farming used to be promoted as one means of alleviating hunger, as it can provide a cheap and plentiful source of protein. In recent years, however, support for intensive farming has faded significantly due to new information highlighting the long-term problems inherent to these systems.

As intensive farms are highly mechanized – requiring little manual labor, their introduction into rural areas tends to reduce rural employment. In the UK and the U.S., the number of farmers has been dramatically reduced with the rise of factory farming. In the U.S., for example, the number of farm workers has dropped 80% over the past 50 years. In developing countries, intensive farming obstructs poverty elimination by driving local farmers out of business.

What choice do we have?

Despite the overwhelming presence of factory farms in America, viable alternative systems do exist and they are gaining in popularity.

Farmers using alternative systems aim to keep animals in conditions that are closer to their natural environment and natural behavior patterns. They often use more traditional breeds of animal that have better resistance to disease and to parasites. They do not allow the routine use of drugs such as antibiotics and hormones to control infection and to boost productivity. The animals grow more slowly and have longer and more natural lives.

Food produced more humanely in this way can be safer for humans, better for the environment and kinder to the animals.