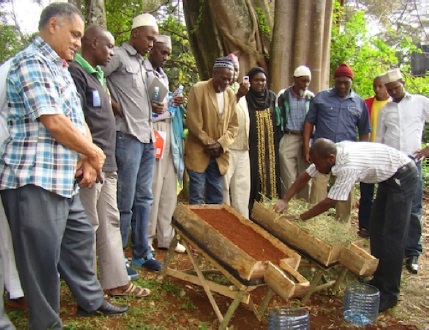 The first manual in conservation agriculture specifically designed for Muslim farmers in Africa will be launched in Nairobi, Kenya, on Thursday March 27 – providing a tool to introduce millions of Muslim farmers to sustainable farming practices for the first time.

Islamic Farming: A Manual for Conservation Agriculture is a brand new curriculum that integrates Qur’anic scriptures and teachings about caring for the Earth as a religious responsibility with practical training in conservation agriculture – a proven form of sustainable agriculture that has been shown to double crop yields in less than five years while also protecting the environment for future generations.

It has been developed by the Alliance of Religions and Conservation (ARC), a secular UK charity that works with faith groups to help them develop environmental programmes, and Global One 2015, a Muslim-led international development organisation. It is launched in partnership with the Supreme Council of Kenya Muslims (SUPKEM) at the Laico Regency Hotel, Nairobi, on Thursday 27 March 2014. His Excellency President Uhuru Kenyatta has been invited to officiate at this significant event for Africa’s Muslim community.

As the first manual designed specifically for Muslim farmers, Islamic Farming has enormous potential for long-lasting impact throughout sub-Saharan Africa, where it will be introduced first, and beyond. It is already generating a great deal of interest and excitement in the Muslim community in Kenya and Uganda, the first two countries to see the manual. There are 248 million Muslims in sub-Saharan Africa and many of them are farmers.

Susie Weldon, ARC’s Africa agriculture programme manager, said: “What makes Islamic Farming different is that it speaks to Muslim farmers in the language of the Qur’an and the Sunnah. By integrating Islamic scriptures with practical teaching in conservation agriculture, the manual will help farmers grow more food while protecting the environment in a way that makes sense to them as Muslims.”

ARC developed the manual following requests from ARC’s Muslim faith partners for help in developing a faith-based approach to agriculture. ARC commissioned Global One 2015 to work with Islamic scholars and clerics to provide the faith teachings and principles underpinning the manual.

Lead editor Dr Husna Ahmad, chief executive of Global One 2015, said: “As Muslims we are stewards appointed by Allah (swt) to be guardians of the world He created. It is our duty to safeguard this blessing, not to exploit it.”

80% of Africans depend on farming for survival

ARC’s Sam Adams, a former farmer in Africa and a trainer in conservation agriculture techniques, devised the practical curriculum, in particular the six-step approach (see attached Islamic Farming handout). He said: “Approximately 80 per cent of all Africans depend directly or indirectly on agriculture for their livelihoods and survival. Islamic Farming has been developed with these farmers in mind. The toolkit addresses poverty, food insecurity, climate change mitigation and environmental conservation.”

Islamic Farming is launched in partnership with the Supreme Council of Kenya Muslims (SUPKEM), whose scholars and clerics contributed to the development of the toolkit. SUPKEM is establishing 10 demonstration sites throughout the country to train Muslim farmers. After the launch in Kenya, Islamic Farming will be taken to other countries in sub-Saharan Africa. This initiative is funded by the World Bank, as part of its TerrAfrica partnership, and the Royal Ministry of Foreign Affairs.

The manual comes at a difficult time for agriculture in Africa. Soil erosion is rising, crop yields are falling, and farmers are struggling with erratic rains due partly to climate change. The International Fertilizer Development Center (IFDC) estimates that sub-Saharan Africa loses around eight million tonnes of soil nutrients per year, and that more than 95 million ha of land has been degraded to the point of greatly reduced productivity.

At the same time, Africa’s population is increasing rapidly and is expected to more than double to 2.3 billion by 2050. New farming methods are needed to increase productivity, nutrition and livelihoods, while also conserving the land for future generations.