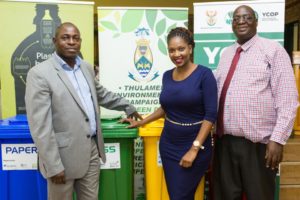 From left: Avhashoni Tshifhango, Thulamela Municipality mayor, Tlou Sebola, of PETCO, and JP Tambani, deputy principal of Tshedza Primary School, one of the recipients of the waste separation bins.

Residents in northern Limpopo are becoming eco warriors, thanks to a new campaign which aims to see environmental waste reduced and much-needed jobs created at the same time.

A “separation at source” project is being rolled out in the towns of Thohoyandou and Sibasa in Limpopo’s Thulamela Municipality, thanks to a sponsorship of 200 waste separation bins worth over R160,000 by Safripol, a national company which manufactures high-density polyethylene and polypropylene plastic.

The handover of the bins on March 4 was overseen by PETCO – the organisation responsible for PET plastic bottle recycling and collections around South Africa – in collaboration with the municipality and departments of Economic Development, and Environment, Forestry and Fisheries.

The colour-coded green (glass), yellow (plastics), blue (paper) and red (cans) bins will appear at schools and municipal offices in the two towns, allowing residents to separate out their household waste for the first time. This means – at least for the households which partake in the project – that only waste which cannot be recycled will end up in the municipality’s landfills.

In turn, the municipality will be able to allow recycling collectors access to the separation waste bins, creating much-needed recycling income opportunities in the area.

“We are committed to helping uplift communities and stimulating income generation wherever we can,” said Gert Claasen, Safripol technology and innovation executive.

Belinda Booker, PETCO’s collections and training project manager, said the support came at a time when the municipality could not afford the separation bins, which are a first for the area.

“The knock-on effect is that the environment will be less polluted, in addition to which the project will also bring more attention to recycling as a source of income,” she said, adding: “The PET recycling value chain created more than 60,000 income opportunities in 2018 and initiatives such as this underpin the value chain.”

As part of its mission to empower municipalities throughout South Africa to recycle more, PETCO reached out to Thulamela Municipality late last year.

“The municipality explained that it lacked the budget to embark on a waste separation at source initiative within Thohoyandou and Sibasa,” Booker said.

“We have partnered with recycling collectors within the municipality who will remove the bins when they are full,” she said, adding that recycling was important to the municipality as it mitigated environmental degradation and pollution.

Booker said working with the government to support the concept of waste separation at source would “actively improve the way municipal waste is managed, and consequently divert waste from landfills – all the while sustaining and boosting the green economy”.

“Partnerships with government at all levels is key to unlocking meaningful strategies to address waste reduction behaviour in South Africa. PET plastic bottles are not trash and have value – and they should be recycled,” she said, adding that it was heartening to see companies such as Safripol taking their extending producer responsibility (EPR) seriously.

“There is a huge need to support recycling, especially in rural areas where waste management is not well serviced or a priority.”