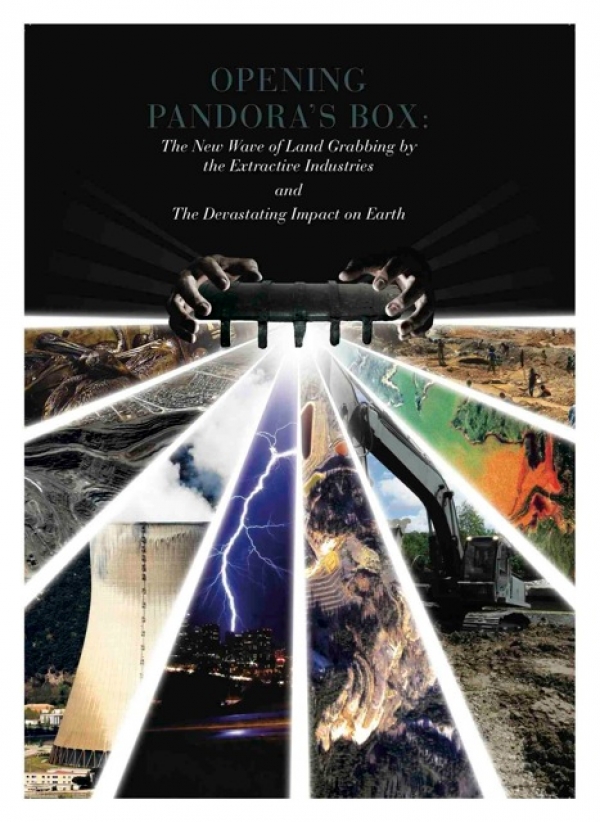 The rapid global expansion and acceleration of the extractive industries presents an unprecedented & devastating land grabbing threat, claims a new report, launched in Westminster today.  The Gaia Foundation’s report, Opening Pandora’s Box – A New Wave of Land Grabbing by the Extractive Industries and the Devastating Impact on Earth has been produced in collaboration with GRAIN, the London Mining Network (LMN) and others. It looks at the global trends, dynamics and impacts of the extractive industries on the planets ecosystems and communities.

Liz Hosken, Director of the Gaia Foundation says “The issue of mining is no longer about isolated pockets of environmental and social destruction. Now pristine ecosystems, new depths of land and sea, protected areas such as UNESCO World Heritage Sites and even the UK Home Counties are targets for the extractive industries.”

Henk Hobbelink, coordinator of GRAIN, adds “We urgently need to wake up to the new reality, and take stock of the voracious new appetite and spread of the extractive industries. In opening up the Earth, we are reminded of the story of opening Pandora’s Box, which warns of the dangers of wreaking irreversible damage on the planet.  Now, can we close the lid on our greed while there is still hope?”

The report identifies the dangerous convergence of trends which are leading to unprecedented and unsustainable growth and scale in mining across the planet. The last decade has seen a rapid increase in throwaway “upgrade” culture in new technologies, driving a steady increase in mineral extraction. The 2008 economic collapse and a rush to invest in tangibles such as metals, minerals and oil have further pushed up prices, providing incentives for exploitation of new territories and deposits. This has been enabled by technological developments in the controversial practices of “fracking”, tar sands, deep offshore drilling and mountain top removal. In addition to their destructive impacts on vast areas, these technologies use huge amounts of energy, water and toxic chemicals, and have a far greater carbon footprint than conventional fossil fuels.

Nnimmo Bassey of Oilwatch Africa, and Chair of Friends of the Earth International adds:

“This report shows clearly how the game has changed over the last decade: the grabbing of land and resources is penetrating ever more deeply into the body of the Earth. Governments are becoming the shoe-shine boys for the extractive industries. We urgently need to set up an international system that holds those ravaging the planet to account. This is not Nigeria’s problem, or the Gulf of Mexico’s problem: this is everyone’s problem. The devastating impact being inflicted on ecosystems and communities must be recognised as international crimes and punished accordingly. Directors of corporations need to be held accountable for the damage they inflict on the planet.”