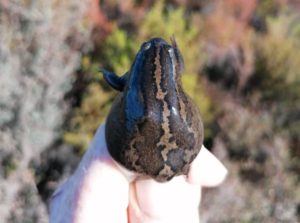 An endangered Cape Platanna prior to release back to site. Image: Keir & Alouise Lynch

In a bid to better understand the distribution and threats facing several highly threatened and endemic amphibians, the Endangered Wildlife Trust’s Threatened Amphibian Program recently launched a project in the Western Cape, focusing on five of the most range-restricted frogs of the region.

This work is being done in partnership with the Bionerds, supported by the Whitley Fund for Nature and the Amphibian Survival Alliance. Still in its infancy, this work has already yielded promising results where, using distribution modelling and a survey technique developed by the EWT’s Conservation Science Unit, the field experts at Bionerds have confirmed two new localities for the endangered Cape Platanna (Xenopus gilli) – expanding the known range for this acidic, black-water, specialist of the Cape lowlands.

All are situated within the centre of endemism of the Cape Floristic Region, home to some of South Africa’s most unique, and threatened frog species. The Rough Moss Frog has a tiny range of 0.9 km2, making it very vulnerable to threats such as alien and invasive plants and fire. The distribution of the Micro Frog, occurring at just four localities across seven km2, is highly fragmented and impacted by urbanization, agricultural expansion, the spread of alien vegetation, and drainage of breeding habitats.

The distribution of the Moonlight Mountain Toadlet is not well understood, although the proliferation of alien and invasive plants poses a severe threat to the species. Urgent, targeted habitat protection and management at key sites will benefit all three species.

The broad project objectives are to:

Fieldwork started in late July, with field surveys being carried out on the Agulhas Plain for both the Cape Platanna and the Micro Frog. We arranged access to relevant sites with the Nuwejaars Wetland Special Management Area, and made amphibian funnel traps that were deployed at each site over two nights. The surveys are based on the distribution models developed by the EWT. 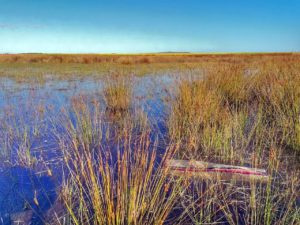 This work shows the value and importance of integrating sound science and conservation action, and working in cohesive partnerships, in protecting forever, together.