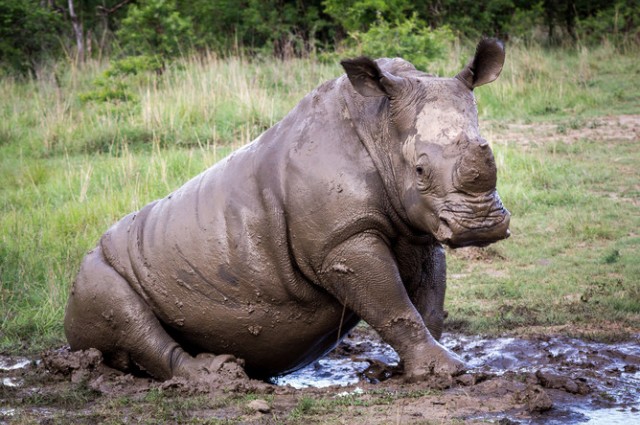 How long before the rhino joins the list? Image: Gerry Zambonini

We are currently witnessing the start of a mass extinction event the likes of which have not been seen on Earth for at least 65 million years. This is the alarming finding of a new study published in the journal Science Advances.

The research was designed to determine how human actions over the past 500 years have affected the extinction rates of vertebrates: mammals, fish, birds, reptiles and amphibians. It found a clear signal of elevated species loss which has markedly accelerated over the past couple of hundred years, such that life on Earth is embarking on its sixth greatest extinction event in its 3.5 billion year history.

This latest research was conducted by an international team lead by Gerardo Ceballos of the National Autonomous University of Mexico. Measuring extinction rates is notoriously hard. Recently I reported on some of the fiendishly clever ways such rates have been estimated. These studies are producing profoundly worrying results.

However, there is always the risk that such work overestimates modern extinction rates because they need to make a number of assumptions given the very limited data available. Ceballos and his team wanted to put a floor on these numbers, to establish extinction rates for species that were very conservative, with the understanding that whatever the rate of species lost has actually been, it could not be any lower.

This makes their findings even more significant because even with such conservative estimates they find extinction rates are much, much higher than the background rate of extinction – the rate of species loss in the absence of any human impacts.

Here again, they err on the side of caution. A number of studies have attempted to estimate the background rate of extinction. These have produced upper values of about one out of every million species being lost each year. Using recent work by co-author Anthony Barnosky, they effectively double this background rate and so assume that two out of every million species will disappear through natural causes each year. This should mean that differences between the background and human driven extinction rates will be smaller. But they find that the magnitude of more recent extinctions is so great as to effectively swamp any natural processes. 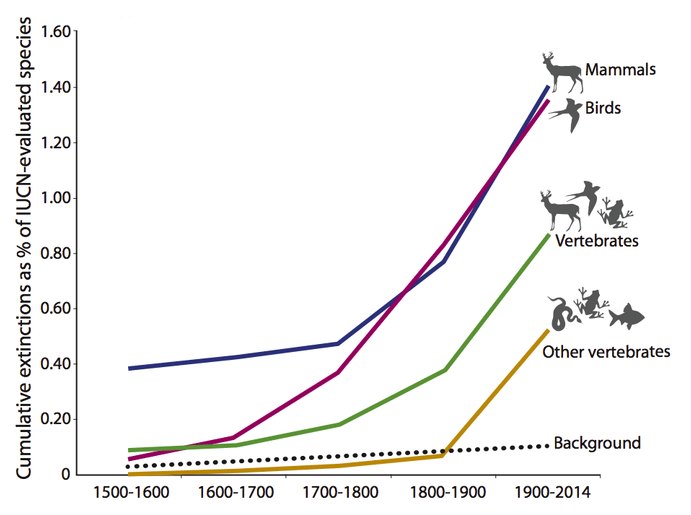 The paper has been published in an open access journal and I would recommend reading it and the accompanying Supplementary Materials. This includes the list of vertebrate species known to have disappeared since the year 1500. The Latin names for these species would be familiar only to specialists, but even the common names are exotic and strange: the Cuban coney, red-bellied gracile, broad-faced potoroo and southern gastric brooding frog. 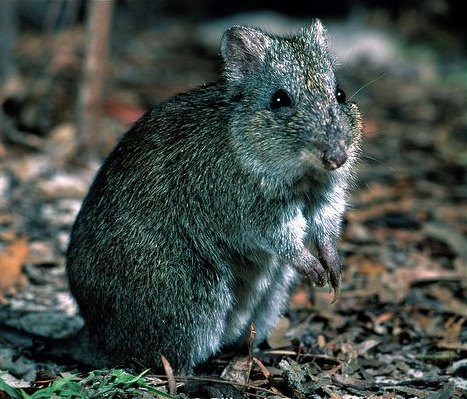 Gilbert’s Potoroo (Potorous gilbertii) is one of four species of potoroo. Sometimes called the “rat-kangaroo”, it is only found in Western Australia and is of the world’s most endangered mammals. Read more here.

These particular outer branches of the great tree of life now stop. Some of their remains will be preserved, either as fossils in layers of rocks or glass eyed exhibits in museum cabinets. But the Earth will no longer see them scurry or soar, hear them croak or chirp.

You may wonder to what extent does this matter? Why should we worry if the natural process of extinction is amplified by humans and our expanding industrialised civilisation?

One response to this question essentially points out what the natural world does for us. Whether it’s pollinating our crops, purifying our water, providing fish to eat or fibres to weave, we are dependent on biodiveristy. Ecosystems can only continue to provide things for us if they continue to function in approximately the same way.

The relationship between species diversity and ecosystem function is very complex and not well understood. There may be gradual and reversible decreases in function with decreased biodiversity. There may be effectively no change until a tipping point occurs. The analogy here is popping out rivets from a plane’s wing. The aircraft will fly unimpaired if a few rivets are removed here or there, but to continue to remove rivets is to move the system closer to catastrophic failure.

This latest research tells us what we already knew. Humans have in the space of a few centuries swung a wrecking ball through the Earth’s biosphere. Liquidating biodiversity to produce products and services has an end point. Science is starting to sketch out what that end point could look like but it cannot tell us why to stop before we reach it.

If we regard the Earth as nothing more than a source of resources and a sink for our pollution, if we value other species only in terms of what they can provide to us, then we we will continue to unpick the fabric of life. Remove further rivets from spaceship earth. This not only increases the risk that it will cease to function in the ways that we and future generations will depend on, but can only reduce the complexity and beauty of our home in the cosmos.