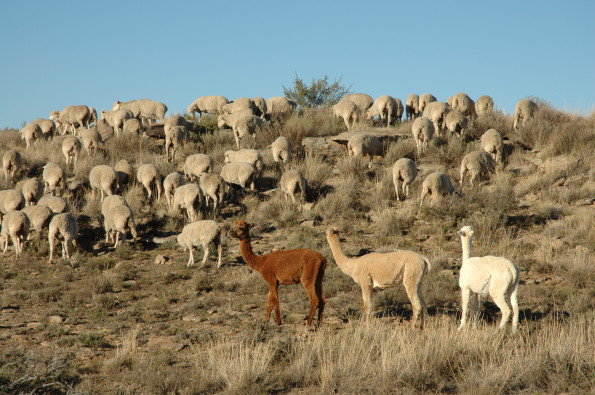 A formal study of eleven South African livestock farms has revealed that lethal methods to combat livestock losses to predators are not only less practical but more costly than non-lethal methods. The report, by Jeannine McManus, Amy Dickman, David Gaynor, Bool Smuts and David Macdonald, radically counters the perception that lethal predator management such as traps, poisons and bullets, is cheaper and easier to implement or maintain than non-lethal methods such as guardian animals and protective collars.

Livestock loss through natural predation is the principal cause of human-wildlife conflict throughout the world, and is particularly prevalent in South Africa. In a 2010 survey, the estimated cost of livestock loss to predation in that year alone was $171 million (about R1,8 billion).

The predominant land use in South Africa remains rangeland agriculture. During the past 50 years, however, this industry has moved towards increasingly larger commercial systems. Economies of scale, as well as political and legal imperatives, have forced farmers to reduce labour costs and risks, and acquire increasingly extensive rangelands without using time-honoured preventative methods. This has resulted in a steady increase of losses, provoking retaliatory and preventative killing of predators.

In South Africa, farmers have employed methods such as gin-traps, gun-traps, poison and hunting to eradicate problem carnivores.

Despite these methods, a 2008 study showed that losses to livestock had actually increased. Moreover, lethal management had had a negative impact on predator populations and the ecosystem at large. The reasons for the failure of lethal control are varied. These methods are unselective, indiscriminate and often kill non-target species. In South Africa, for example, they destroy severely threatened species such as the Cape Vulture.

Many predators avoid control efforts but even if the intended culprit is removed, there is usually an influx of subordinates that fill the territorial vacuum, thus increasing predators and, therefore, livestock losses.

The advantages of non-lethal methods

The study found that non-lethal methods, especially the use of guardian animals, are far more advantageous. They preserve the lives of predators, are more effective in protecting livestock, are less costly and require less commitment. In Namibia, 73% of farmers using guardian dogs such as the Anatolian sheepdog reported a decrease in livestock fatalities. And dogs are not the only effective guardians; donkeys, alpacas and llamas all behave aggressively towards predators and chase off smaller carnivores.

Alpacas in particular have been used to great effect. James Brodie of Southern Cross Alpacas says these five-foot-tall camelids are much easier to manage than dogs and require almost no special care as they bond, eat and move with the herd. Castrated males vigorously protect their adopted herds by kicking and trampling anything from small predators to humans.

According to Brodie, the once-off cost of buying a young male is recuperated within two lambing seasons. Thereafter, a guardian alpaca will live for up to 20 years. During the three-year study, lethal and non-lethal methods were examined on 11 livestock farms. In the first year, farmers used lethal controls. They then switched to guardian animals or protective neck collars for two years.

One analyst pointed out that “lethal predator control is an expensive management practice, with farmers employing permanent trappers, hiring problem animal hunters and using other lethal control methods with associated management costs (hunting dogs, helicopter culls, etc)”. Non-lethal control, on the other hand, was much cheaper, required less commitment and preserved the ecology.

Follow-up surveys conducted 13 and 30 months later found that many farms had resorted to lethal methods, or a combination of lethal and non-lethal control. It seems that human-wildlife conflict is not necessarily economic – there are cultural aspects too.

Despite this, the latest findings may go a long way towards revolutionising how farmers deal with the anachronism of lethal predator control. Although not ideal in terms of the preservation of carnivores, a combined policy affords partial protection of the ecology as well as money for livestock farmers.

Adam Cruise is a published travel writer, photographer, adventurer and student in philosophy specialising in environmental ethics. He specialises, and is passionate about, the environment and the impact humans are currently having on the natural resources throughout the sub-continent.