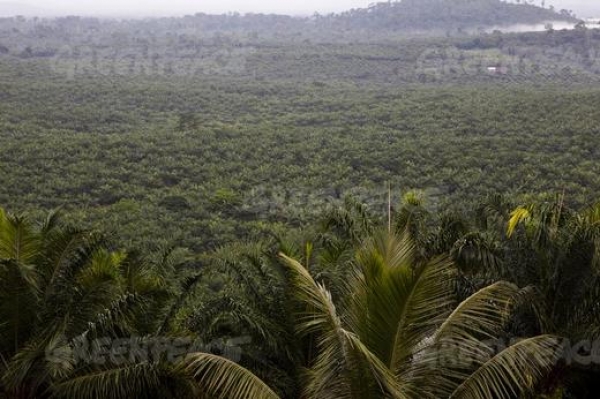 A new report from The Oakland Institute, in collaboration with Greenpeace International, exposes how a New York-based agri-corporation, Herakles Farms, and its local subsidiary SG Sustainable Oils Cameroon (SGSOC), are involved in a land deal that is questionable under Cameroonian Law and opposed by locals since 2010. Herakles Farms has just pulled out of the industry’s sustainable certification scheme.

Claiming it is “addressing a dire humanitarian need,” Herakles Farms intends to establish a massive 73,000-hectares palm oil plantation – one of the largest on the continent – in Southwest Cameroon through a 99-year land lease. Being developed without the consent and adequate consultation of many local communities, this project exemplifies how the scramble for land in Africa threatens sustainable development and human rights.

Evidence in the film “The Herakles Debacle” (viewable below), produced by the Oakland Institute, documents the scope of community resistance and forest destruction that will result from the project.

“Bruce Wrobel’s crude attempt to greenwash his company’s palm oil project hides broad opposition and questions about the legality of the company’s contract with the government. They started operations in breach of national law and international standards. But their efforts to hoodwink the public are unsuccessful. Local communities are unimpressed with promises of infrastructure and jobs, and angry about the loss of their land and livelihoods,” said Frederic Mousseau, author of the report and Oakland Institute’s Policy Director.

no agreed-upon windfall in sight

The company negotiated conditions that are exceedingly favorable for the company. For example, low rental rates and removal of all export duties for the next 99 years. The plantation project area is in the midst of a “biodiversity hotspot”. It would deforest an area roughly eight times the size of Manhattan, which serves as a vital corridor between five different protected areas.

“If Herakles Farms was really about supporting development and environmental protection as it claims, then it would not be ripping off Cameroonians under a contract where they pay as little as US$0.50 to US$1.00 per hectare per year. It would not be converting valuable rainforests into large-scale palm oil plantations. This palm oil plantation would wreak environmental havoc and dislocate communities who rely on the forests,” said Greenpeace International Campaigner, Frederic Amiel.

Herakles Farms’ Chief Executive Officer, Bruce Wrobel has established a non-government organization, All for Africa. He calims it will bring additional development outcomes, through the use of palm oil revenues for the funding of development projects. While All for Africa claims its goal is to plant trees, it keeps silent on the fact that the plantation will result in major deforestation, loss of biodiversity, and the conversion of natural land and forests into a monoculture crop. The NGO is also quiet on widespread local and international opposition to the project.

stop the project & establish a moratorium

The Oakland Institute and Greenpeace support the demand from Cameroonian NGOs for a moratorium on new agro-industrial concessions until the country has developed a new approach to the granting of land concessions.

“The Herakles Farms plantation project in Cameroon is an example of the wave of land investments in Africa that have previously been exposed by the Oakland Institute. Once again, the investor is deceiving the public into believing that forests must be cut down and small farms erased in order to alleviate hunger and poverty. International attention needs to be mobilized to support local opposition and prevent future resource grabs,” said Frederic Mousseau.

“The planned Herakles Farms project must be stopped now. On top of the legal issues, it is the wrong project in the wrong place. Greenpeace does not believe that palm oil produced from deforestation should ever reach the markets. We echo local opposition to this project – for the sake of communities who depend on the land and forests for their livelihoods,” said Greenpeace Forests Campaigner, Frederic Amiel.