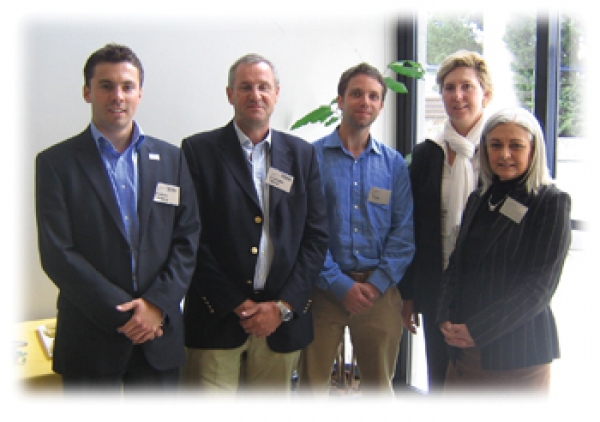 ‘Sustainable development is the biggest opportunity in the history of business.’

So said Jonathon Hanks of Incite Sustainability at the Eco-Centric Journey, an insurance industry focused conference held at the Sanlam head office. The aim was to raise industry’s awareness of climate change and hone its ability to respond to the global crisis. There were many excellent speakers, but I enjoyed Jonathon’s presentation on the nature and extent of the business implications of climate change.

‘Is business up to the challenge?’ he asked.

‘We can’t only look to the past for solutions; we need to find something completely different. We are now beginning to see a combination of significant challenges that will have a profound impact on business. Business has arguably become the dominant institution of our time; unfortunately some of the key levers that impact on business – such as the media and the financial sector – are not engaging in a sufficiently informed manner.’

(That’s why we had to create a newspaper for this cause – the other papers do not appear to be interested enough to give it sufficient coverage.)

‘Many scientists have suggested that the next two years will determine our future,’ he continued.

‘There is broad agreement that we need to stay below a 2 degree rise in temperature on pre-industrial levels if we are to avoid runaway climate change. Ensuring this will be complicated both by the increase in consumption patterns and by the anticipated 50% increase in population by 2050. According to their recent carbon footprint calculation, the average person working for Santam emits 7.83 tons of CO2 per year into the atmosphere.

Globally it is suggested that if we are to retain emissions below the required levels, by 2050 each person should emit less than 2 tons annually. There’s a huge gap between where we need to go and business as usual. While the South African government has previously expressed its commitment to addressing global warming, last week it announced that there will be no emissions reduction targets; and they once again highlighted their priority of actively pursuing coal-fired power stations!

An important problem we face lies with the disconnected manner in which environmental issues are often seen as separate from economic and social issues. We need to appreciate that climate change is about social justice. Addressing the challenge will not only require technical solutions; we also need an ethical shift. We need to see a significant shift in values, and a shift in how we define wealth and success (it should not be a function of the size of your car).

There is no doubt that on many social issues we have made significant progress since the industrial revolution. But this has come at some cost and cannot be sustained in its current format. In many respects we’ve been having a huge ‘party’ based on flawed assumptions about limitless growth and cheap oil. I fear this party needs to end. At last here was a conference where it was not all talk, but for the rest business as usual.

Some small, but significant changes I really valued were: