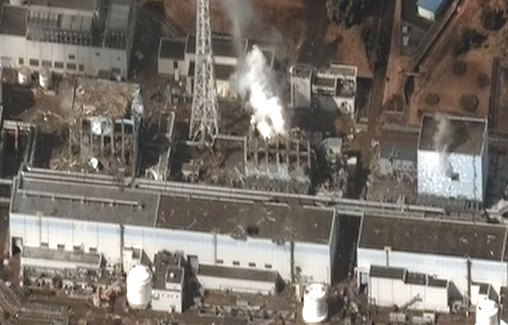 The 5th anniversary of the meltdown of the Fukushima nuclear power plant on the east coast of Japan has come and gone, and, still the whole story hasn’t been told.

The cover-up began almost immediately after the 11 March 2011 disaster, and Japanese journalists who dared write about it, risked criminal action. Besides Japanese pride, there are many reasons for the cover-up. Some include the 2020 Olympic Games, payment of compensation to victims and the negative impact on Japan’s economy.

However, the smokescreen is beginning to show cracks, and the head of the Japanese nuclear regulatory authority Shinji Kinjo, has just admitted that they have an emergency on their hands. He also criticised Tepco (Tokyo Electric Power Company), the utility that runs Fukushima, saying: “Their sense of crisis is weak.”

Currently if an unprotected person approaches the damaged Fukushima buildings, the radiation level is so high that death could occur in less than an hour. Entering the damaged building, even wearing protective gear, is out of the question, and three remote controlled robots have also failed, due to intense radiation.

Mycle Schneider is a Paris-based nuclear energy consultant, and advisor to the European parliament on nuclear matters. He is also lead author of The World Nuclear Industry Status Reports and does not mince his words.

He says Japan’s escalating situation is: “Far worse than we truly know. There are hundreds of issues at stake here,” he told the Huffington Post UK.

“Whether it is meltdown temperature, radiation exposure, or the number of people exposed – all of these statistics are flawed. We don’t know anything yet.”

“This is far worse than what the general public are perceiving. At the moment we are facing the challenge to conquer denial. This is simply organised denial,” he said.

Pushing ahead with nuclear development

Yet, even as the Fukushima disaster continues to play out, Japan’s prime minister, Shinzo Abe, has reaffirmed his commitment to nuclear power and is pushing to restart other nuclear plants. With 70% of Japanese population opposed to nuclear energy, this proposal goes totally against public opinion. While many scientists and Greenpeace are alarmed by the continuing contamination of the atmosphere and of the Pacific Ocean, Abe insists that the situation at Fukushima is under control.

Fukushima provides a perfect case study for the meltdown of truth. It is beyond reckless and immoral for governments and mainstream media to downplay and cover up such disasters. Besides being well researched on environmental crises, I have written many articles and have aired my views on radio several times.

Not wanting to be branded a ‘scare monger’, I’m beginning to shift focus from radiation damage to life, to the immorality and hypocrisy that lies behind such disasters.

With such disasters, truth is often the first casualty. Yet truth (in whatever form) is the key to health and survival, especially regarding unprecedented life-threatening disasters like Fukushima.

South Africa is no different and we are witnessing the collapse of truth on many levels. Besides vested interests, there is no good reason for South Africa to even consider purchasing nuclear power. Our solar energy potential is one of the highest on the planet. And yet the issue of purchasing costly nuclear power plants is shrouded in secrecy.*

To give the situation further perspective, dangerous and costly nuclear technology is being harnessed simply to boil water. This in turn creates steam to drive electrical generators.

Have we forgotten that with simple, safe technology such as concentrated solar power (CSP) the sun can boil water extremely effectively? If solar energy works so well in Nordic countries, how much better is it suited here, in sunny South Africa?

The dark side of capitalism

Let us not forget that the global economy is ruled by those who control the money system. Multinational corporations, including multi-trillion dollar nuclear industries, seek to monopolise control of markets such as the energy sector. The way profits are extracted have nothing to do with a healthy environment and humanity.

This is the dark side of capitalism, working systematically to undermine democracy and common sense, as well as the environment and the health of humanity.

*At the beginning of April 2016, minister of energy, Tina Joemat-Pettersson, said in parliament that a deadline in the nuclear procurement programme had been missed. Opposition parties took this to mean that the programme had been mothballed, but this was denied by the government.