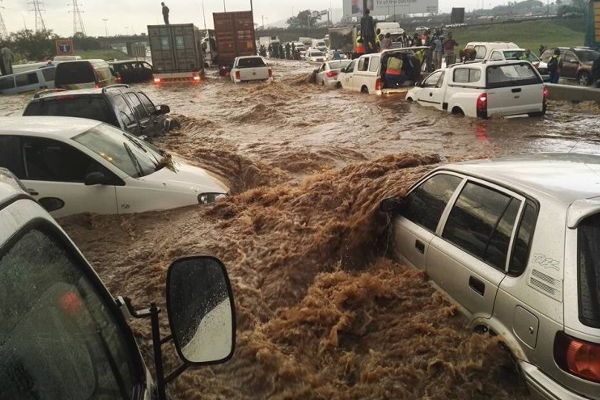 The South African weather services has warned that extreme weather conditions – which have led to heavy rain, strong winds, thunderstorms and flash floods – is likely to continue on Friday.

The thunderstorms which have hit Joburg – causing chaos in the East Rand in particular – has been described as a “once in a century” storm. Flash floods have already claimed at least 6 lives in the city, while one person has also reportedly died from being struck by lightning.

According to the weather service, the West Rand is already experiencing storm conditions, which is expected to travel over the city. Areas in Mpumalanga and the Free State are also expected to be affected.

Floods have caused massive damage to Joburg roads, and displaced hundreds of people whose homes were swept away in the storm. During the week, routes on the N3 were closed off and flights at OR Tambo International Airport were grounded as the storms hit.

Insurance companies have reported that well over 1,000 insurance claims have already been made, with more expected to follow.

Many roads left damaged and dangerous

Motorists have been urges to proceed with caution, as many roads have been left damaged in the wake of the floods, with pot holes and other dangers possibly obscured by flood water.

The weather service has also sent out information on what to do during lightning storms, recommending that people indoors during a lightning storm – and if travelling, stay in the vehicle, while keeping the car windows fully closed.

“Lightning occurs with every thunderstorm and must be expected as soon as thunderstorms form,” the service said.

“When indoors stay away from windows, do not hold any metal object nor use any electrical appliance. Do not use the telephone. Do not take a bath or shower during a lightning storm.”

“If caught in the open, seek shelter in building or sit/lie as flat as possible. Don’t shelter under lone trees or isolated sheds. Keep some distance away from fences, telephone or power lines and steel structures such as pylons and windmills,” it said.