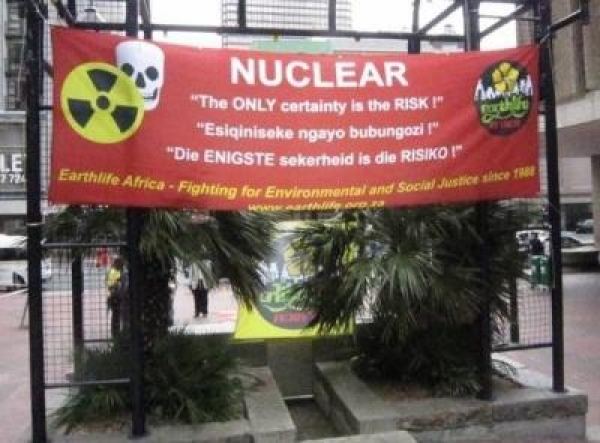 One of the lesser known impacts of radioactive emissions, such as from nuclear power stations, is genetic damage to the foetus. Plans to massively expand nuclear power in SA will expose more women and children to the horrors of birth defects and genetic mutations. Last week, members of anti-nuclear organization Earthlife Africa gathered to hold a moment of Silence in Solidarity with the International Day of Elimination of Violence against Women, marked on Thursday 25 November. Many came to join in and show their support for the elimination of violence against women.

Let the truth be heard

“Little known impacts of nuclear radiation on women and children, especially women that are pregnant, must be brought out into the open,“ said Earthlife Africa Cape Town’s Gray Maguire. “The ongoing threat to the unborn in our country is at a higher level than ever before, given plans to build multiple nuclear power stations across the country.”

The Government’s Draft Integrated Resource Plan 2010, a plan for South Africa’s electricity assessment for the next 20 years, is being fiercely resisted by many organisations, as not only was the plan drawn up by government and key business interests, but also excluded meaningful consultation and involvement by civil society and labour. It proposes at least 6 more nuclear power stations, each double the size of Koeberg. 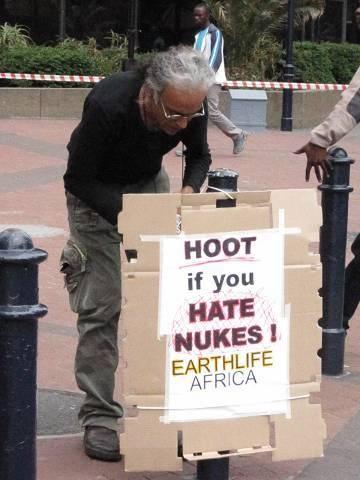 “If there were no fears about the safety of people around a nuclear power station, then why will NECSA not release data relating to emissions from Koeberg?  Also why have no health studies on surrounding populations ever been done?” said Janda McDonald, also of Earthlife Africa.

This was, yet again, a really worthwhile action. The resonance with the impacts of nukes on women and children was obviously something that people were genuinely interested in…

To start with, thanks are due: Gray, Nkululekho, Andreas and Helen – not only did they work their butts off, but their skills certainly came to the fore – Nkululekho had been involved in ELA CT some years back, and just popped out of the blue, and got stuck in!! So we had knowledgeable people on nukes in all the local languages!!

Gray, your banner concept really worked, although no one chose to walk on it – I think that shows what respect people have for people who are harmed. A special thanks to the women of COSATU – their presence in solidarity with our cause was humbling.

A thousand 4 page flyers were handed out, and about 15 new people have signed up to the campaign – Helen Hoekstra, local filmmaker, took some great video footage and pics for our archives!! We also had a crew from Sierra Club (USA) present and recording interviews, etc; Brendan Magaar from the Argus spent a lot of time with us; and a video crew from the UK (Guardian and others) also engaged and recorded a lot… great exposure for the cause!!