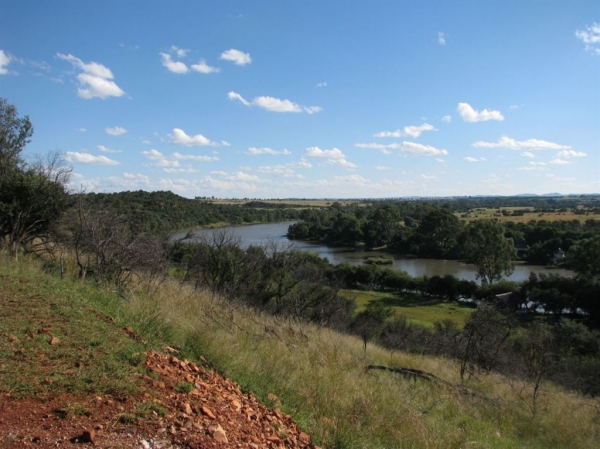 Parys is a town situated on the banks of the Vaal River in the Free State province of South Africa.

My wife and I relocated to Parys, Free State from Johannesburg just over a year ago. We were attracted by its quirky atmosphere with an eclectic mix of art galleries, antique shops and top-class restaurants on the one hand and the “vetkoek dens” and “tuisnyverheid” emporiums on the other. The folk are very friendly and you would expect nothing less from a community that boasts over 15 churches! All this for a population of around 45 000 residents.

On top of all this, Parys is at the heart of one of the best-kept secrets in South Africa – the World Heritage Site of the Vredefort Dome!

This is where the largest meteorite ever in the history of our World, hit the earth some 2 billion years ago. The resultant impact left its indelible mark on our landscape that can still be seen from space today. The impact was so great that some scientists put forward the suggestion that it might have sparked the birth of multi-cell organisms due to the enormous heat, dust and possible shaking of the earth on its axis.

One would think that with such tourism possibilities (never mind international geological interest) the townsfolk of Parys would be only too keen to make the town as attractive as possible to visitors. Although they are a welcoming bunch when it comes to helping you part with your money, there is a certain underlying apathy when it comes to physically making the town attractive in other ways.

Let me explain. There are three or four supermarkets in Parys that serve the populations of both Parys and neighbouring Tumahole. These are all well-known brands that belong to multinational corporations. However, not in any one site is there any attempt to provide recycling facilities for the shopping public to ecologically dispose of glass, cans, plastic and paper.

The local municipality does not help as on your designated collection day all the refuse is just picked up together – even though some of us always separate our recyclable material. If this all goes into the same refuse truck I do not see how it can be separated later. Therefore it is very possible that all this material, both biodegradable and non-biodegradable, ends up together in landfills where the mixture of the two produces toxic leachates which emit methane, a greenhouse gas that is 22 times more greenhouse noxious gas than carbon dioxide!

The very simple solution to all of this is to recycle and/or compost as much waste as possible. Since adopting this policy in our household some years ago, it is surprising how little you have to throw away for the refuse collectors to remove! So in our household we separate glass, tin, paper/cardboard and plastic for recycling and then put all kitchen scraps and garden cuttings into our Green Genie composting bin.

It is amazing who and what you come across when you start looking for solutions like these!  For example, there are local residents of Tumahole who earn a living out of collecting cardboard from waste thrown away by the supermarkets (and there is lots of it!) and selling it to the local waste company. This particular activity has caught the imagination of some of the townspeople who now remember to bring their cardboard but only cardboard, to a central site where the “entrepreneurs” can sort it into saleable lots for the recyclers. This provides them with a basic income.

You would think it would be an easy step from here to expanding this to include glass, plastic and tin for example! No way! When we approached the supermarkets about the possibility of installing recyclable waste collection bins outside their store we were met with negativity instead of enthusiasm. This for a project which had the potential to both improve the lot of disadvantaged communities AND present an image of caring for the community by these stores! Maybe it was because there was a small cost involved on their part?

We managed to find a source of receptacles and a local company who would accept the sorted recyclable stuff for onward processing. We also had the co-operation of the local community who were already involved in the cardboard project and they would be “employed” to monitor the public by ensuring the various recyclable materials were placed in the correct receptacle. They would then benefit by collecting a fee from the recycling company for the sorted waste collected. You would think that this would be a “win-win” situation.

The (nationally branded) stores have so far expressed very little interest in supporting this initiative. As a recycling enthusiast I would have thought that they had a social responsibility to their customers and to the environment. These are huge chain stores with a vast turnover and big profits. Our Municipality is bankrupt and corrupt and they quite frankly couldn’t give a damn about implementing laws and someone to monitor them.

We believe that if the supposedly well-respected corporations like these supermarket chains, do not start the initiative then nobody will! Do they not realise that the responsibility for the future well-being of the environment lies as much with them as with anybody? The bigger problem is, to our mind, in the smaller communities such as Parys rather than in the larger cities and is probably tied into the willingness or otherwise of large corporations like the supermarket chains and the local municipalities to actually “bother” with corporate social responsibility which probably, in their minds gives them little or no return on their “investment.”

We also attempted to get the local B & B’s, guest houses and lodges interested in disposing of their cooked and raw food waste in an ecological way by investing in a system that turns cooked (and raw) food waste into organic compost. Again, although there is an initial investment in the system, the benefits eventually outweigh this. All that these organisations can see is a “cost” instead of a “return on investment.” It also goes to show that although people in general accept that we must do something to “save the planet” that is fine as long as it is someone else who is doing it!

We know that Parys is not the only town that displays this apathy – it just happens to be the one we live in and therefore have the most experience with!