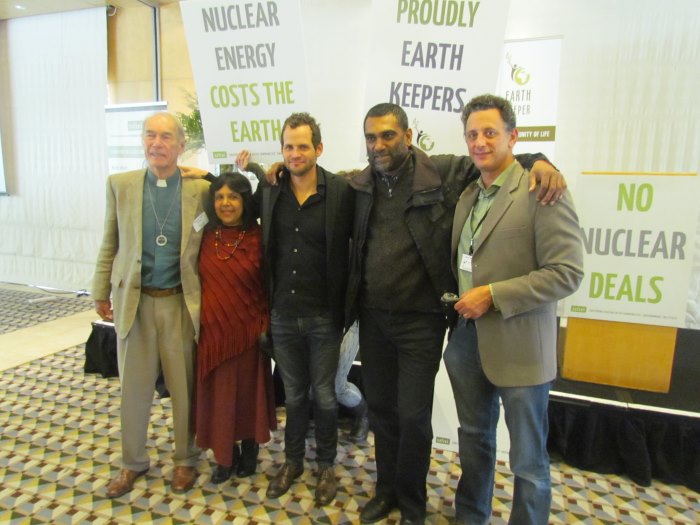 “One of the critical challenges of leadership right now is having the courage and basic honesty to say to people exactly where we are. To speak truth to power. And the bottom line is that we are 5 minutes to midnight in terms of the climate plot.” So said Kumi Naidoo, former head of Greenpeace International, at his opening speech during the Earthkeeper Briefings Way Beyond Nuclear in Cape Town.

The event was organised by the Southern African Faith Communities’ Environment Institute (SAFCEI) and Earthlife Africa Johannesburg as a fundraiser for the SAFCEI court case against the government’s nuclear deal with Russia.

“South Africans across the board need to stand up now and say this deal cannot, must not and should not go forward.”

Groundswell of activity unites against nuclear

“We should be the silicon valley to drive the green economy,” said Kevin James, CEO of Global Carbon Exchange (GCE), who spoke about the opportunities which the energy crisis presents.

“The kind of groundswell of activity that civil society is currently drumming up is very exciting. It’s becoming active again after a legacy where activism was very dangerous. All of us are coming together.”

“For every risk there is a massive opportunity in this space,” he said. “There is a different scenario to the one that’s been bulldozed currently in South Africa.  We’re in the biggest innovation wave of our time,” said James and that we know full well that fossil and nuclear energy is not good for us. “If this is going to be our energy future we will look back and we will have huge remorse.”

“We already have 44 gigawatts of installed capacity in SA. They say we need another 40 more gigawatts, but do we really need all this energy? Government has so spectacularly mismanaged our economy that instead of the 4.6% growth in GDP that was used in this calculation from next year there’s a very strong possibility that our economy will start to contract….

Circus of Madupi and Kusile can starve us of water

Coal still represents 48% of the energy mix… and there’s the other circus that is Madupi and Kusile. On its own this can bankrupt this country and … starve us from our most precious resource which is water.”

Liz McDaid from SAFCEI explained why their lawyers are claiming the nuclear deal is illegal: The Constitution says all procurement should be supplied in the most cost effective way.

Yet nuclear comes with a massive price tag and is likely to impact significantly negatively on our economy. A recent study by UCT shows that a large nuclear build will have a negative economic impact on the country. From this report: “There is … a 94% chance that electricity prices will be higher in 2030 as a result of the commitment to nuclear power, which would have negative impacts on growth, employment and welfare in South Africa.” Follow the link at the bottom of this story to read the full report.

The decision within the country to procure nuclear had to be taken by the minister in agreement with the energy regulator. This Section 34 determination was taken in 2013 and hidden from the nation. It is illegal to take this in secret and without public participation, said McDaid.

SAFCEI started the court case in October 2015. The nuclear deal was gazetted in December 2015. In the minutes of that meeting it says that they released these documents because of the SAFCEI court case. Else nobody would have known about it? Was there approval from parliament, as our Constitution demands? They also missed the small print stipulating transparency.

It seems the court process has already delayed the process of procurement, but this case cannot stop now. Government’s call for proposals hasn’t started. Now government is dragging out the litigation and has postponed responding a few times, delaying the hearing. This all leads to increasing costs to SAFCEI.

SAFCEI has now issued a Rule 30A, which forces them into another timeframe. So the case will be pushed to the unopposed role, if they don’t respond in time. Yet, says, McDaid, court action alone will not solve the problem. Every person must explain this to his circle of influence. You don’t bend legal process to get your buddies jobs.

“This is not about nuclear power, but about bending the rule of law to suit yourself. The current decision makers seem to forget that we have a democracy ruled by the constitution.”

If there ever was a time for all intelligent South Africans to stand together, it is now. Please support this important fundraising effort to keep nuclear at bay and protect our children’s future by donating here.

Please continue journeying with us by: