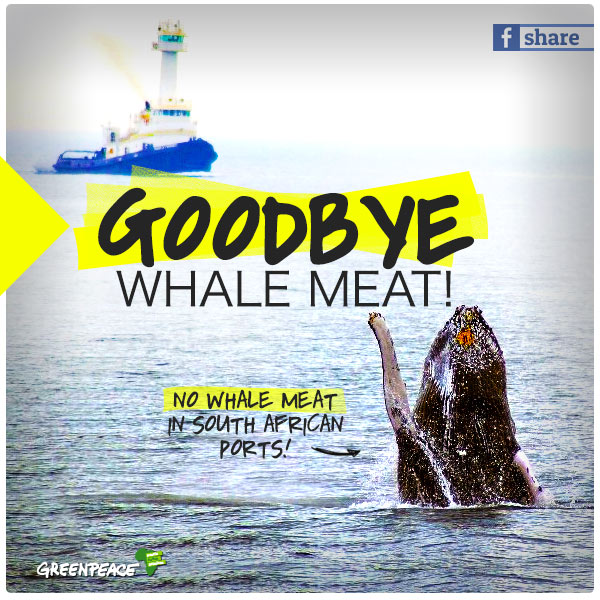 This week the cargo ship Alma, carrying 2,000 tons of endangered fin whale meat from Iceland, has decided not to enter the South African port of Durban. The ship was en route to Japan to deliver its condemnable cargo in Tokyo and wanted to resupply halfway. It would have met public outrage.

In three days over 21,000 South Africans joined Greenpeace in its request to the port authorities to deny entrance and service to the Alma. Greenpeace is calling on the South African government to add pressure to other African ports to continue to deny services to the ALMA when it reaches their shores.

Michael O’brien Onyeka, Greenpeace Africa Executive Director said, ‘Every country and company involved in shipments should be aware that making money on the trade of endangered species is being met with international moral rejection’.

“South Africa has made great strides in closing the loops to trade illegal species inside and outside the country, but they can do more to deny ships like the Icelandic whale meat transporter ALMA from entering Africa’s waters. After actions of Greenpeace last year, the ports of Rotterdam and Hamburg declared that transshipments of whale meat are not welcome anymore,” he said.

“When the ALMA tries to port in Mauritius or other ports, South Africa must urge their counterparts to take measures not to offer services to the ship or return the ship back to sender”, added O’Brien-Onyeka.

“Whale meat – just like rhino horn – is illegal in South Africa. The shipping company underestimated South African citizens commitment to abolish the trade of illegal and endangered species and wildlife. Now, the vessel has left South African waters without the possibility to refuel”.

“It is up to other port states on the route of this vessel to continue to deny access to whale carrying vessel, to prove their genuine commitment to intention of the CITES treaty that over 178 countries have signed up to- over 50 African nations are party to the treaty”, concluded O’brien-Onyeka.

The Republic of South Africa is a founding member of the Convention on International Trade in Endangered Species (CITES), which forbids the international trade of fin whales. Also, the International Whaling Commission has declared a moratorium on commercial hunting. The countries disagreeing with these bans are Iceland, Japan and Norway.

The International Court of Justice in The Hague ordered two weeks ago that Japanese whaling in the Southern Ocean should stop immediately. Although this is a big win for the protection of whales, the Icelandic transports make clear that whaling is still an important issue of worldwide concern.

Greenpeace continues to call on key players in the worldwide shipping industry –flag states, ports, waterways and carriers- to end their role in the trading of endangered species like whales.”‘This continuous hunt makes no ecological or economic sense,” O’brien-Onyeka stresses. “Endangered whales belong in our oceans, not in frozen storages. When the transports stop, there is no future for most of the whale hunters.”