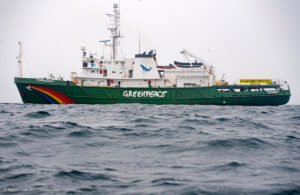 Activists on board the Greenpeace ship Esperanza documented a large methane leak located in the British exclusive economic zone in the North Sea.

The leak was caused by a major blow-out during an oil drilling operation 30 years ago, and is still emitting methane; a gas 28 times more powerful than carbon dioxide.

“Like many places across the North Sea, climate-destroying methane has been leaking here for decades, yet the oil and gas industry, instead of closing the leak and monitoring it, continues to drill holes in the sea bed, while decision-makers turn a blind eye. We are in the middle of a climate crisis fueling fires, floods and inequality across the world and this leaking methane is a climate change multiplier!” said Dr Sandra Schöttner, marine biologist and oceans campaigner with Greenpeace Germany, who is leading the scientific work on board the Esperanza.

In 1990, the Swedish Stena Drilling Company, on behalf of Mobil North Sea (now Exxon Mobil), accidentally tapped a gas pocket with the drilling platform High Seas Driller while searching for oil, causing a blowout that resulted in several craters on the seabed. An international team of scientists had previously been to this site and estimated in 2015 that up to 90 litres of methane per second were being released. The leaking borehole has been returned by Exxon Mobil to the British state who in 2000 determined that further monitoring was not required, believing that the reservoir would soon be depleted. But 30 years later the greenhouse gas keeps escaping into the atmosphere.

The Greenpeace ships Esperanza and Rainbow Warrior are on a month-long documentation and peaceful protest tour to document the impacts the extraction of fossil fuels is making in the North Sea. Teams on board will gather evidence of the extreme industrialisation of the region by the oil and gas industry, which has been polluting the ocean, fueling the climate crisis and exacerbating inequality with its “business as usual” operation model.

“The oil and gas industry has been fuelling the climate crisis and polluting our oceans for decades. This industry does not belong in the new green world we need to build after the pandemic. We need a rapid change to renewable energies and a just shift of fossil fuel workers to industries with a future. We need governments to bail out the climate and workers, not the polluters,” Schöttner added.