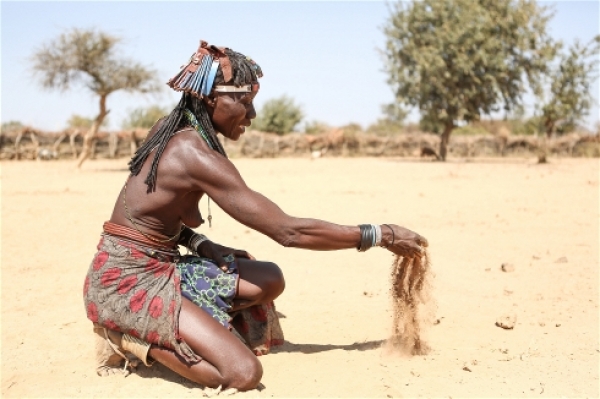 Kariamakuju Kauta harvested only enough maize from the parched soil on the outskirts of Opuwo in northwestern Namibia to feed her family for a few months. Their supply will run out in a few days. © Jordi Matas/UNICEF

The arid hills of Namibia’s northwestern Kunene Region make for a harsh environment at the best of times. With agriculture limited by the region’s dry, sandy soil, most of the local population rely on livestock farming, leading a semi-nomadic existence dictated by the search for fresh pasture for their cattle and goats. But following two years of failed rains, pasture is almost non-existent; where there used to be grass, there is now little more than dust.

“The drought is killing everything,” said Teemuime Mbendura, who lives in a Himba homestead, about one hour’s drive north of the regional capital, Opuwo.

The Ovahimba are indigenous to northern Namibia and have largely managed to maintain their traditional way of life, including the women’s practice of applying a mixture of animal fat and ochre to their skin and hair to achieve a distinctive reddish hue. But increasingly erratic rains – which are expected to grow even more variable in the future, according to climate change predictions – are threatening the sustainability of their pastoral existence.

Mbendura does not know her age – “Maybe a thousand years,” she says – but she is certain this is the first time in her life that the rains have failed for two consecutive years. “The old men used to consult the ancestors to ask for rain, but now there are no old men left at the homestead, and the younger ones don’t do this,” she told IRIN.

The younger men are noticeably absent from the homestead, which consists of huts encircled by a makeshift fence. Most have taken their cattle to distant patches of pasture in an effort to keep them alive.

“My husband is at the cattle post,” said Maikotoka Mbendura, pointing towards some mountains on the horizon. “He’s been gone two months. He left us with some maize meal, but it’s not enough. The children are hungry.”

Mbendura is preparing a watery porridge for her three year old, using what is left of the maize meal purchased from the sale of a few cattle. “We’re worried the rest will die from the drought; some have died already,” she said, adding that the starving cattle no longer produce milk.

Although northern Namibia has been hardest hit by the current drought, the entire country has been affected, according to Hellen Likanda, deputy director of the Directorate of Disaster Risk Management, which is coordinating the drought response. “People did not harvest enough food in all the regions,” she said.

President Hifikepunye Pohamba declared the drought a national emergency on 17 May after an initial assessment found that 331,000 people were in need of food aid. That figure has since climbed to over 460,000 and continues to rise, said Likanda, who admitted that the 52,000 metric tonnes of maize meal already distributed by the government was not enough.

Following the emergency declaration, the government allocated 200 million Namibian dollars (US$20.1 million) to the drought response, but Likanda said that more funding was needed and that the government was currently drafting a gap analysis that would be used to appeal to international donors to help meet the shortfall. The UN Children’s Fund (UNICEF) has launched its own appeal to raise $7.4 million to respond to the needs of women and children while the International Federation of Red Cross and Red Crescent Societies (IFRC) is appealing for $1.48 million. Please help them by donating here.

The government’s initial procurement of maize meal came from local small- and medium-sized millers that lacked the capacity to fortify it with much-needed nutrients. Likanda noted that future procurements would stipulate that maize meal be fortified and supplemented with rations of meat, fish and pulses.

Kunene’s governor, Joshua Hoebeb, said that the 49,000 bags of maize meal the region had so far received did not match the numbers of people registered for food aid, which was in the 70,000s and increasing on a daily basis. “We need to provide aid until the first harvest [in March] next year,” he told journalists gathered at his offices in Opuwo, “and we don’t know where the next shipment of maize is going to come from.”

None of the households that IRIN interviewed in Kunene had received food assistance. “The government promised food, but it hasn’t come,” said Teemuime Mbendura. Her extended family at the homestead is now largely dependent on the 500 Namibian dollars ($50) a month one or two family members receive in old-age pensions. The men are reluctant to slaughter or sell their cattle to buy food, partly because the meat is fetching significantly less than it would in a normal year, even with the additional 300 Namibian dollars ($30) per cow that the government is offering as an incentive for destocking. Cattle also represent a Himba man’s pride and prosperity.

Kapara Mbinge, 35, has returned to the homestead for a funeral, following a three-day journey from a cattle post 140km away. So far, he has lost six animals to the drought and sold two, but he still has a herd of 65. “I don’t normally sell them,” he told IRIN. “They are my wealth.”

One meal a day

The Zemba, another indigenous group in the region, depend less on livestock farming and more on cultivating crops, but they are faring no better. Kariamakuju Kauta, 55, estimates that she has enough maize left from this year’s meagre harvest to feed her family of 12 for one more week. The parched soil did not yield any vegetables, and the family’s six cattle have all died. “For now, we are eating once a day,” she said. “The children are going to bed hungry, and when they wake up, there’s nothing to give them.”

“The children are going to bed hungry, and when they wake up, there’s nothing to give them”
Five of her family members have gone to Opuwo in search of work, an increasingly common response to the drought, according to Kakarandua Mutambo, regional manager for the Namibia Red Cross Society (NRCS).

“Government aid is taking time,” Mutambo said, adding that it is only targeting rural households. With more families move closer to town in the hope of earning an income, NRCS is about to open a soup kitchen there that will initially feed 200 children once a day.

UNICEF is also partnering with NRCS to provide funding and technical support for the training of volunteers in four of the most affected regions, including Kunene. They will be deployed to communities to educate residents about basic health and hygiene practices and to screen vulnerable children for signs of malnutrition. A pilot health extension workers programme in Opuwo District, also funded by UNICEF, has similar goals of providing basic health services and information to under-served communities.

Nhamoinesu Mudadi-Benhura, acting principal medical officer at the Engela District Hospital in hard-hit Ohangwena Region, said that admissions for paediatric malnutrition had increased by 76 percent since March, with 30 cases recorded in June and eight deaths. Nationally, a total of 46 malnutrition-related deaths had been recorded by July this year, but how many of the deaths were directly linked to the drought is difficult to determine.

Namibia is classified as an upper middle-income country by the World Bank, but malnutrition remains a chronic problem in many poor households, with 29 percent of children affected by stunting, according to UNICEF. Children are often only diagnosed after the malnutrition has become severe and follow-up is frequently lacking, said Mudadi-Benhura.

“The problem is support after they leave hospital,” he said. “Even if you give Plumpy’nut [a peanut-based paste used to treat malnutrition], that child has siblings, and it will be shared.”

Mudadi-Benhura noted that the majority of malnourished children admitted to his hospital came from makeshift settlements on the outskirts of towns, where there is no space to grow crops and poor sanitation causes diarrhoea and other illnesses that contribute to the problem.

Riondjovi Mupia, 28, and her three children moved to one such settlement near Opuwo four months ago, when the vegetable patch she had relied on for an income failed due to lack of rain. For a few weeks she earned a small income working in a shop in town, but that job has since ended. There was nothing to feed the children besides a few maize kernels, which she was toasting over a fire when IRIN arrived.

“I registered for food aid, but I haven’t received any yet,” she said.