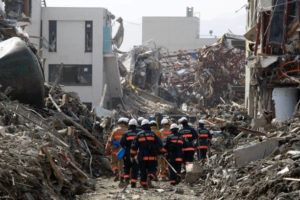 The massive explosion following a cooling problem at one Fukushima’s nuclear reactors, Daiichi, has been followed by more blasts at three more nuclear reactors, and two others are in danger. Up to date reports confirm that the Japanese government has issued a statement saying that radiation levels are now at dangerous levels, given the additional radiation from a fire in a storage pond of used fuel rods.

The level measured is the same as if a person were receiving 4000 chest X-rays every hour. This has created an untenable situation for workers and local residents, especially given that a state of emergency has been declared for five reactors at the two plants.

‘Workers are being exposed to the ‘allowable’ annual dose of radiation every hour that they remain on site. Our hearts go out to them,’ said Muna Lakhani, co-ordinator of Earthlife Africa‘s Unplug Nuclear 1 campaign.

The danger is not over.

‘The measuring of Caesium at the plant indicates that a meltdown has indeed taken place, which raises the levels of radiation released to catastrophic proportions,’ suggested Lakhani.

Latest news on Tuesday confirms multiple meltdowns, with early reports suggesting that the inner containment vessel has been damaged in at least one reactor, leading to a much higher release of radioactive pollution. Measurements show that as much as 11000 mSv per hour has been released, when the ‘allowable’ dose per annum is about 1000 mSv for the whole year.

The reactors have all been shut down. The reactor core remains hot for days after shutdown, however, so workers have been busy ensuring that the fuel rods do not melt down. For this the cooling systems need to be operational requiring a power source. The quake has disrupted the backup supplies of power including diesel generators. The IAEA supplied batteries and coolant in the interim.

They are now flushing the highly radioactive core with seawater which will cause massive seawater contamination whilst preventing a full scale Chernobyl type meltdown. This is an act of desperation and unprecedented.

There has been a history of safety problems and cover-ups by TEPCO at the Fukushima reactor complex.

It took local activists many hours to get the exclusion zone expanded from the initial 10km to 20 km, which, while not completely safe, helps limit harm to local residents. New reports show that radiation has been now measured in Tokyo, which is about 240 km from the disaster site. The danger has only begun.

South Africa is considering a ‘fleet’ of nuclear reactors, at Thyspunt, Bantamklip and additional reactors at Koeberg, at a potential cost of hundreds of billions of Rands. The National Nuclear Regulator has also come under fire, for not mobilising a ‘hazmat’ team, with local activists questioning their ability to respond to a disaster at Koeberg.

The public should note that our existing nuclear power plant Koeberg is on a geological fault on the Cape Fold Belt with the last destructive large earthquake occurring in 1809.

Interesting also is that if we were to apply the 20km exclusion/ evacuation zone (less than what’s now been applied to Fukushima) to Koeberg this would mean the whole of Cape Town would have to be evacuated in a few hours, a clearly impossible task. To make matters worse, evacuation plans are secret, so very few people know what to do, and how to do it.

‘We call upon the nuclear industry, and the South African government, to take this disaster seriously, and abandon all nuclear plans for our country. Given that proposed sites are all along the coast, we believe that this gamble is unacceptable. Not only are sustainable and safe alternatives cheaper than nuclear power, but they are also better solutions to the creation of decent work and energy security, as well as the best solutions to limit climate change,’ Lakhani states.