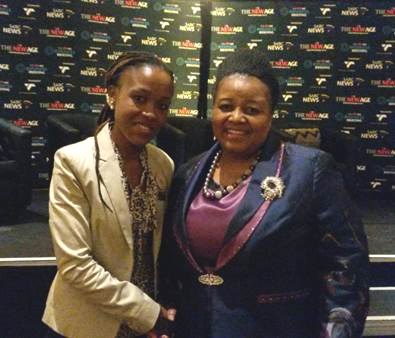 Nuclear was not part of the Nationally Determined Contribution (NDC document)which our country submitted to COP21 ahead of the conference. Yet now we are going ahead with nuclear?

Ahead of COP21 in Paris last year, civil society met with the Department of Environmental Affairs (DEA) to give input into the Intended Nationally Determined Contribution for South Africa (INDC). “We worked hard on our input to the DEA stakeholder meetings and this resulted in the omission of ‘nuclear’ from the NDC as a solution to reduce carbon emissions” said Lydia Mogano from Southern African Faith Communities’ Institute’s (SAFCEI).

However, when Lydia Mogano asked Minister Edna Molewa about this at a COP debriefing this week, the Minister stated that South Africa has an IRP Plan with energy mix that includes solar, wind, hydro and nuclear. Although South Africa didn’t specify the inclusion of nuclear, this is what will be implemented in order to reduce carbon emissions.

SAFCEI believes that this new nuclear power poses unacceptable environmental, social and economic risks to the people of South Africa and believes that concentrated focus on renewable energy is the key to alleviating poverty and addressing the developmental needs of the country. SAFCEI has, together with the rest of South Africa, watched with disquiet the changing of Finance Ministers in December. Key to the firing of Minister Nene appeared to be his reluctance to approve a nuclear financial deal that would destroy the economy. It seems that South Africa is going to go nuclear at any cost, including sacrificing democratic rights of speaking out.

SAFCEI believes that Ethical governance has to be the cornerstone of true democracy, stated Lydia Mogano, “this new democracy must be held accountable or risk bankrupting the country”, adding “it is our faith that gives us courage. As people of faith, we are concerned about the direction our leadership is taking. We need and deserve transparency, honesty and openness around the decisions being made for our future.”