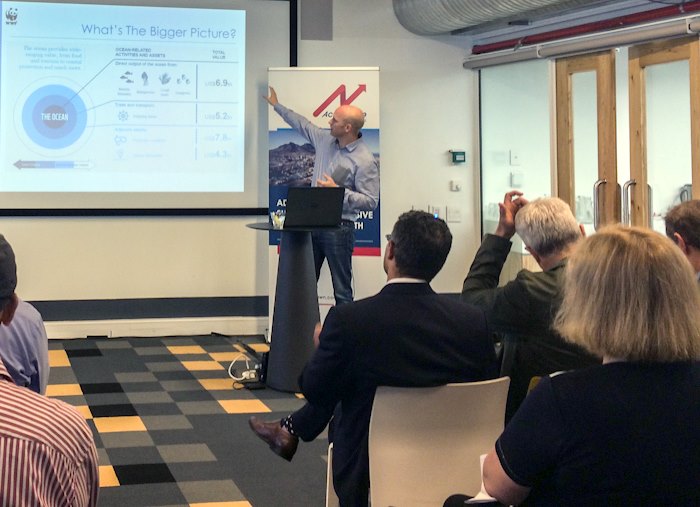 How will our oceans cope with the oil and gas prospective plans? We may boast sustainable fisheries, but oil & gas prospecting is revealing a bleak future for our oceans.

South Africa’s coastline is in high demand. It has become increasingly clear to the government, as well as large corporations, that there is money to be made from our coasts.

Operation Phakisa was set in place to fast track development, to reach goals, to flash numbers, and to make money, and although the Department of Environmental Affairs is said to have a significant voice, we remain worried that the already sensitive ocean ecosystems will suffer further.

Three oil and gas companies currently have prospecting rights for phosphate along our coasts, a concerning fact for anyone who holds the environment dear.

Getting the right people together in the room is the first step in working out solutions for a problem. Accelerate Cape Town took initiative and organised a workshop where three key speakers could state their case and answer questions from affected parties.

The workshop was held on 27 November and the speakers were John Duncan, Senior Manager of WWF-SA’s Marine Programme, Jonty Jankovich-Besan, Chairman of the Responsible Fisheries Alliance and Managing Director of Irvin & Johnson (I&J), and John Smelcer, an expert at Webber Wentzel on Oil & Gas. Fisheries, environment and oil & gas met face to face, in a very civilized manner. 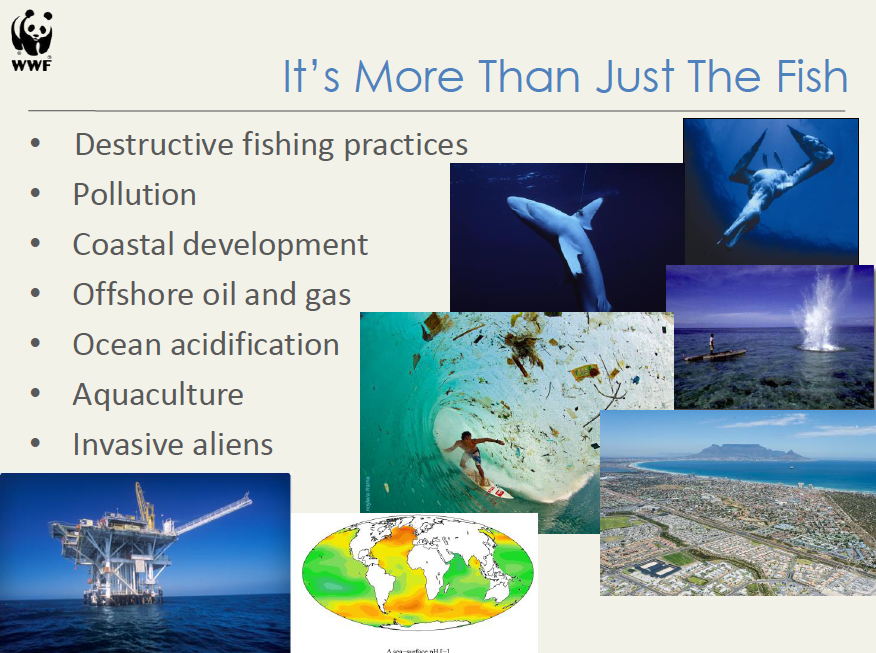 Ryan Ravens, the CEO of Accelerate Cape Town, started by mentioning the major problem with the current oil and gas explorations: the prospecting rights overlap with fishing areas and are found within South Africa’s Exclusive Economic Zone (EEZ). If drilling would commence in these areas, not only would SA be the only country to mine within the EEZ, but it would also mean considerable risks to our fisheries.

While the risk to the fisheries is important, so too is the risk to our oceans – not only from mining, but also from the fisheries themselves. John Duncan represented the WWF’s very important case that our oceans don’t have an unlimited capacity to supply to the GDP. The current state of our oceans makes it clear that we can’t simply keep on taking from it.

The oceans supply between 70% and 80% of the oxygen we breathe and if they aren’t in good health, they can’t supply is with that oxygen. The oceans also supply 17% of the world’s protein and a third of its energy. Yet 90% of fish stocks are either overexploited or depleted. If we don’t change trajectories, 450 million more people will go hungry. Opportunities for aquaculture exist, but if it isn’t done correctly it will do much more harm than good.

What Duncan wants the fisheries and oil & gas enterprises to understand, is that the entire approach toward these potential money earners has to be from an ecosystems perspective. The ocean has the capabilities to supply to all of us, but fisheries have to be managed for recovery and resilience rather than yield, destructive practices need to be eliminated, aquaculture needs to be prioritised to feed people and not supply fish meal, and at least 20% of the oceans must remain protected in order to sustain biodiversity. 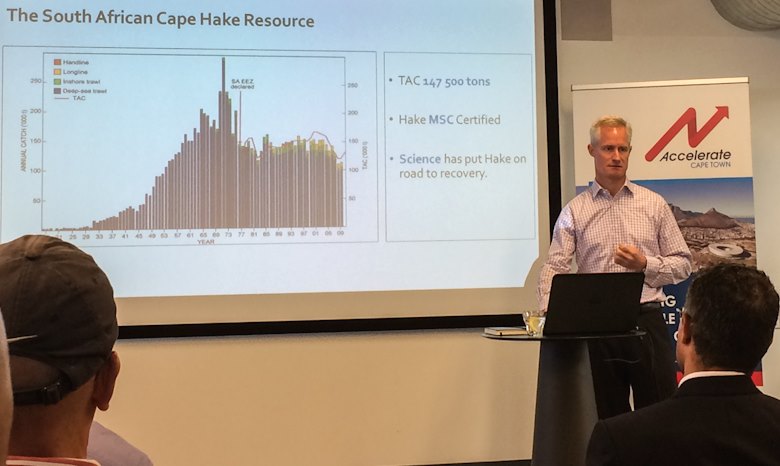 Perhaps Duncan’s most important point was that a marine spatial plan should be developed in order for these competing companies to stop aiming for the same resource. He also mentioned looking into changing our diets to wild caught seafood instead of just line fish. It certainly would help to feed 7.3 billion people.

Jonty Jankovich-Besan’s two roles as both Chairman of the Responsible Fisheries Alliance and Managing Director of I&J shows that our fisheries have a conscious approach to their business. To make things simple, he stated that I&J would not have been operating for a century if they didn’t have the correct sustainable practices in place.

Since establishing the EEZ in 1977, the amount of white fish taken from the oceans dropped considerably. It is now stable at 150 000 tons a year, and although they are fishing at the oceans’ absolute capacity, they are not depleting it. The 150 000 quota is calculated by scientists, so even if they wanted to fish more, they never will.

Local fisheries are only fishing in 4% of the EEZ, because the fish are found along certain “highways”. Therefore the industry regulates its impact on the oceans automatically. Jankovich-Besan mentioned that the Marine Stewardship Council (MSC) often uses South Africa as an example of responsible fisheries. 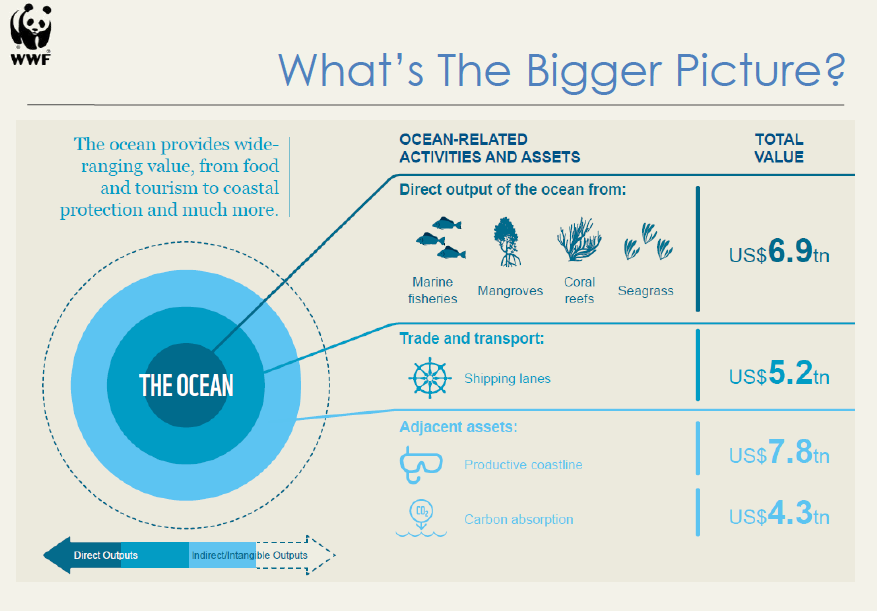 The Responsible Fishing Alliance is unique to South Africa in that it brings NGO’s, environmental organisations, I&J, and Sea Harvest together to work on strategies that are aligned to supply the maximum seafood output without destroying the environment.

Three companies have prospecting rights to mine oil and gas

The major problem in this functioning, sustainable scenario is that three companies currently have prospecting rights to mine oil and gas. These rights overlap with the EEZ, posing a threat to both the environment and the fisheries industry. John Smelcer started off by once again highlighting the monetary potential of off shore mining in South Africa.

In a world where renewables has been proven to be the way forward on a planet that is slowly heating up, it is worrying to see new, non-renewable projects launched. Yet Smelcer reckons gas is South Africa’s ideal bridge for moving into renewables, because solar and wind energy isn’t yet at a point where it can satisfy South Africa’s energy demand.

According to Smelcer, the drop in the oil price has caused a temporary lapse in interested in oil and gas. This gives prospecting companies the chance to sit in the same room as environmental and fisheries organisations to work out a positive, pragmatic approach that will leave everyone satisfied and the oceans protected. He reckons that, just like with I&J, this set of regulations should be based on science.

In need of government input

A special task team drafted a White Paper in May 2014 titled, Management of the Oceans. Although it attempts to reconcile the environment with industry, it isn’t yet finalised and Operation Phakisa is steaming forward regardless. Any decisions and development plans will be based on environmental assessments, but without the necessary laws in place, there is no certainty that the oceans will be protected during all of this.

Everyone in the room agreed that the government has a critical role to play in reconciling the competing parties with nature, but fast tracking the White Paper is proving difficult. If our government doesn’t get involved in the matter, it seems very likely that the state of our oceans won’t come first when put up against a R177 billion revenue.