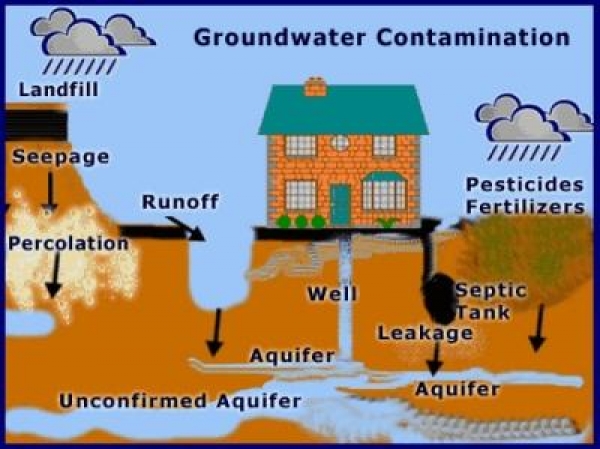 The diagram shows the several ways that groundwater can become contaminated. When a source of groundwater for wells becomes contaminated, it can affect the drinking water for miles around. Image: Filter Water

Around two thirds of South Africa’s surface area is heavily dependent upon its groundwater. Pulled underground by gravity and stored in mainly non-porous rock cavities, groundwater is a valuable resource, especially in times of drought.

The Institute of Waste Management of Southern Africa (IWMSA)’s Western Cape branch hosted a workshop last week to address the issue of Oils and Solvents as hazardous waste, and the correct manner in which to store and dispose of these two substances, which could otherwise cause irreversible damage to our precious groundwater.

Oils and solvents are required to be properly contained, marked and stored before being disposed of; with the correct permits in place, and at suitable hazardous waste management facilities.

Melani Traut, IWMSA committee member and Professional Scientist says ‘Whilst commercial entities are largely responsible for producing waste oils and solvents, the public also needs to be informed of the dangers of irresponsibly dumping such materials. One shocking statistic is that the oil, from one oil- change on a single motor vehicle, can potentially contaminate up to 3 million litres of ground water. That’s more than an Olympic sized swimming pool (which holds 2.5 million litres of water).’

We all know the effects on fish and bird life when there’s a major oil spill on a body of water. The oil spreads out into a thin ‘monolayer,’ which acts as a barrier, depleting anything beneath it of oxygen. Although not visibly obvious, a similar situation occurs when oil or any other harmful liquid infiltrates soil. It impacts on groundwater, affects permeation by covering roots, interferes with osmosis and can literally poison plants and animals, not to mention humans.

Solvents are another cause for concern and produce unseen toxic gases which are volatile and flammable. Sometimes, the mere vapour from solvent residues is enough to explode or ignite with the slightest spark. If some proprietary/specially designed emulsified solvents are disposed of incorrectly, they will pollute and upset the pH balance of the landfill site and increase the salinity of the leachate (leachate is similar to the liquid that collects in the bottom of waste bins), since they may contain caustic soda and other salts.

All liquids sink right to the bottom of landfills and if the landfill is not designed to carry hazardous waste, they can damage the landfill liner, escape into the earth, and hence into the groundwater.

Liquid groundwater pollutants are both mobile and insidious, which makes them extremely difficult to contain. It is, however, encouraging that there is a plan in place in South Africa, where over the next five years all liquid waste will eventually be banned from landfill. In the meantime, it is essential to prevent such hazardous waste from entering the environment illegally.

Hamied Mazema, IWMSA committee member and Professional Chemical Process Engineer says ‘We have to alter our thinking. If you design something, you have to consider the end result. Simply put, we need to avoid producing the hazardous waste to begin with, in order to prevent having to dispose of it; reuse materials, recycle diligently and recover whatever we can. Disposal should be the last port of call.’

The IWMSA is a professional, multi-disciplinary organisation with voluntary membership established to promote the science and practice of waste management and is a non-profit organisation. It provides education and training for its members, offering opportunities to network and exchange information with like-minded individuals, and to have a voice in the formulation of legislation.