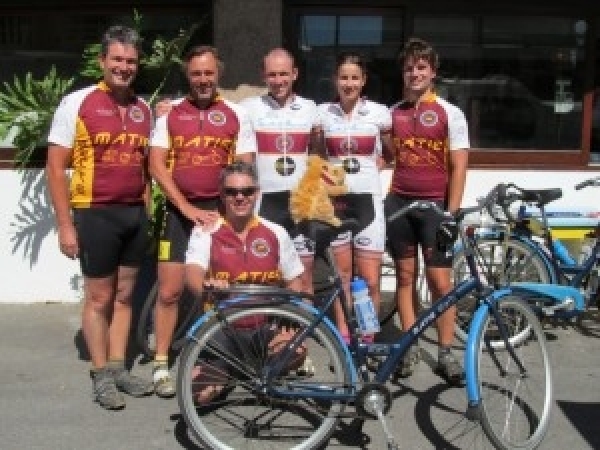 A team of cyclists connected to Stellenbosch University (SU) managed great achievements on the Pick n Pay Cape Argus Cycle Tour on Sunday, with green inspiration and cheers from the crowds.

What to do going uphill without gears? You stand up and use your body weight, like we used to do as children, of course! This brave team used the new, but old MATIE BIKES – they are ex “OV-fiets” bicycles from the Netherlands.

When they were decommissioned by the Dutch Railways in 2006 after six years of service, they were imported into South Africa by the Bicycling Empowerment Network (BEN).

The University recently bought 400 of them. These will be rolled out on campus on 15 March in support of sustainability. In order to generate publicity for the importance of going green the committed team of Maties embarked on what seemed to be a “Mission Impossible” – to do the Cycle Tour on these heavy, single-speed commuter bicycles. This was later changed to ‘Emission Impossible’ by a facebook supporter.

How did they fare on these heavy, single-speed commuter bicycles up and down the mountain and all, considering that these don’t exist in the Netherlands?

The MATIE BIKE has passed its first big test with flying colours.

The victorious MATIE BIKE team, from left, Hans Heuer, Carinus Lemmer, Andrew Smith, Anja van Zyl, and Stephan Nieuwoudt, with Desmond Thompson in front, and Pokkel on the saddle. Absent from this picture is Jan-Hendrik Verdoes, who kept cycling after crossing the finish line first. He was last spotted going up Du Toitskloof Pass on his way upcountry.

The seven Stellenbosch cyclists – plus Pokkel, the Matie mascot – completed the tour in spite of the 42°-Celsius heat on the second hottest Argus in the history of the event.

Jan-Hendrik Verdoes (22), a student in Mechanical Engineering at Stellenbosch University (SU), was the first rider of the group to finish – in a time of 4:42:14. Stephan Nieuwoudt (18), a first-year BAcc student, followed in a time of 5:03:57.

Pokkel hung on for dear life

Four cyclists finished next in a group, in a time of 5:49:30: Hans Heuer (48), an SU alumnus and owner of Musikhaus W Heuer, Carinus Lemmer (47), director of the National Cycling Academy of South Africa, Andrew Smith (28), coach of the Matie Cycling Team, and Anja van Zyl (20), a third-year Food Science student.

Pokkel finished with this group. He spent the entire race clinging to the carrier on Van Zyl’s bike with great determination.

“He definitely brought me luck, because I finished the Argus under six hours with no mechanical problems, which is better than many other participants on modern bikes,” Van Zyl said.

Desmond Thompson, senior writer and researcher with the SU Division for Institutional Advancement and organiser of the MATIE FIETS Argus initiative, brought up the rear. His time was 5:58:58.

“Wow, I did not expect it. You know, this bicycle can really go. Even up hills! If you just stand up out of the saddle and peddle hard, the guys on ordinary bikes are left behind,” said Nieuwoudt.

This year’s Argus was characterised, as usual, by large groups of supporters who encouraged the cyclists along the route. The cry, “Maties!”, resounded whenever the MATIE BIKErs rode past.

“It was fantastic! Many of the other Argus riders recognised the MATIE BIKE. They kept on asking, ‘Are those the new campus bikes?’” said Thompson.

Read more about the MATIE BIKE in our story.