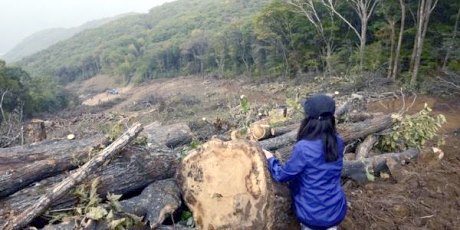 It seems like a no-brainer. And it should be. But right now, Olympic organisers in South Korea are tearing down a forest, with trees half a millennia old, to make room for new ski facilities.

It’s shortsighted, illogical and worst of all, irreversible. Once the precious forest is gone, it’s gone forever. But we can stop them from clearcutting for an Olympic sized resort. The International Olympic Committee laid down a mandate that this event should be a “Green Olympics,” built and operated by principles of sustainability. If we launch an enormous global outcry from every country participating in the Winter Olympics, we can shame the International Olympic Committee to living up to their ideals.

Pyeongchang, South Korea won the bid for the 2018 Winter Olympics, and to hold just two ski events, they are clearcutting the world’s largest expanse of Wangsasre tree, while devastating one of the last remaining habitats of four vulnerable animals: the Eurasian Otter, the Leopard Cat, the Marten and the Flying Squirrel.

This place has been considered sacred in Korea for hundreds of years and the mountain has long been protected. But to win the Olympic bid, the government removed the protection. Now, huge scars have been carved into the mountains, and developers are moving fast to clear cut enormous areas of forest to create a massive ski resort.

There is no reason for this – the Games could take place in another city like Muju, and that could save $138 million! The International Olympic Committee’s own environmental standards outline sustainable development for the Games. It’s time to hold them to account for turning a blind eye to Pyeongchang’s destruction, and demand they uphold their own rules.

It’s unconscionable to think of thousands of 500 year old trees felled for a few winter Olympic races. What’s been torn down can never be replaced. But if enough of us raise our voices we can stop them from expanding it, and ensure that the Olympics never destroys our global wonders for the games again.

Forests are the lungs of our world, vital to the clean air and stability of our shared planet. Time and again, Avaaz members from across the world have come together to protect these treasures. From thousands of us chipping in to purchase a corridor of Borneo rainforest to winning major battles to protect the forests of Amazon, Aceh and Australia, Avaaz has shown that when we come together, we all win. Let’s do it again.

Dalia, Jooyea, Mais, Nataliya, Alice, Emily and the rest of the Avaaz team