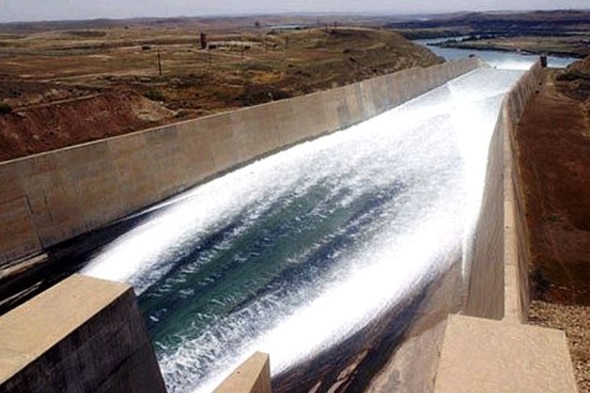 The Mosul Dam in Iraq.

The national security establishment needs to prepare for a series of global crises sparked by climate change, a group of experts wrote in a report released today.

The analysis by the Center for Climate and Security identifies 12 “epicenters” where climate change could stress global security, possibly igniting conflicts around the world.

American diplomats and military planners have already started grappling with some of these problems—but the links between them do not get enough attention, the experts said. And it is an open question whether the Trump administration confronts those challenges or tries to ignore them.

Many of the risk epicenters stem from resource shortages and dislocated populations, but the experts also consider an increased likelihood of nuclear war, more pandemics and tensions in the Arctic.

Any one of those factors is enough to cause serious problems, but together they threaten to undermine the international order, said Francesco Femia, one of the authors of the report, titled “Epicenters of Climate and Security: The New Geostrategic Landscape of the Anthropocene.”

“The humanitarian effects of [climate change] are massive,” he said. “But what we’re saying is that those humanitarian consequences are likely to spill over into broader security problems that speaks to the heart of how the world organizes itself.”

For instance, island nations like the Maldives could sink under the waves as sea levels rise.

That would present a crisis for the international community, which has never dealt with a disappearing state and has no legal norms for resettling climate refugees, the report notes.

Water problems could also pose challenges on the ground.

Non-state actors are already weaponizing water to control local populations, either through diverting scarce water sources or—as the Islamic State group did when it seized the Mosul Dam in Iraq and threatened to demolish it—by gaining the leverage to devastate downstream population centers.

In the coming years, water shortages might also lead to interstate war, said Marcus King, a professor at George Washington University’s Elliott School of International Affairs who authored the chapter on weaponizing water. Egypt has already threatened Ethiopia with air strikes over damming the Nile River.

Policymakers tend to think about climate change in “very confined areas” without considering the ripple effects, King said, so it’s important to demonstrate the links between things like climate change, droughts and conflicts.

“It’s not difficult to understand, but whenever the argument’s sort of caricatured as climate [change] to ISIS, that’s fodder for all kinds of criticism,” he said.

The legitimacy of many nation-states rests on whether they can deliver basic necessities, Femia said, but it took a while for national security experts to account for that.

“In a lot of ways, for a long time our way of measuring whether a state was fragile or was going to collapse didn’t really include core environmental factors and natural resource factors, like food and water,” said Femia, who is also the president and co-founder of the Center for Climate and Security.

Over the past 10 years, the intelligence and national security establishments have stopped treating climate change like a niche issue, Femia said, and it seems to have carried over into the Trump administration—at least outside the White House.

Defense Secretary James Mattis, Director of National Intelligence Dan Coats and Secretary of State Rex Tillerson have all acknowledged the hazards of climate change. Whatever chilling effect the White House might project onto the climate issue, those senior officials have given some cover to the career officials in their agencies, Femia said.

“That chilling effect is there,” he said, but for the most part, career officials have adapted to it semantically rather than substantively. The Defense Department, for example, hasn’t stopped adapting Navy bases to rising sea levels.

“You’ll see a little bit of not calling things climate [related], but I don’t really think the work is going to stop,” he added.

The fiscal 2018 budget fight could reveal how much those agencies will continue adapting to climate change, Femia said.