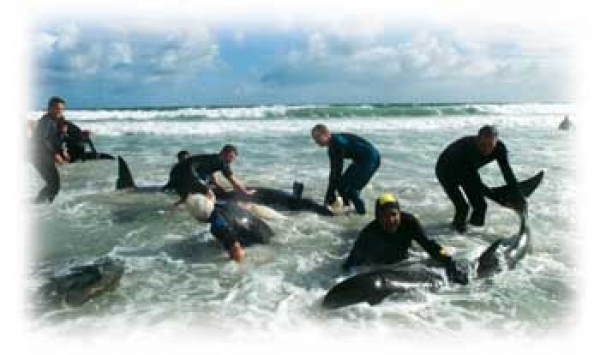 Anna Breytenbach is one of our country’s foremost animal communicators and a teacher in animal communication. She went to Kommetjie during the whale beachings and listened to what they had to say.

The majority of the whales were sick and dying – as a result of swimming in some sort of chemical effluent in the ocean, to the northwest of Cape waters. This invisible toxic stream affected them internally to cause a slow death. So their immune systems crashed, making them susceptible to and ill from parasitic infections. A few of them were physically fine, having withstood this – but they weren’t going to leave their family members. So they swam ashore with the dying ones.

They said ‘the Mother’ (the ocean) is being poisoned, and so are they. It’s time humans woke up to this and witnessed the effects.

To die in peace

The whales appreciated the compassion and care that people showed in trying to return them to the water, but would have wished to be given the choice, i.e. pointed out to sea/refloated once, and then left to die in peace if and when they returned. Humans holding vigil for them with understanding would have been far better than the forceful, violent means ultimately used. In between the above thought forms are the emotions and soulfulness of their consciousness that cannot be expressed in words by this mere human

Anna is a professional animal communicator who has received advanced training through the Assisi International Animal Institute in California, USA and has been practicing for ten years in America, Canada and South Africa with domestic and wild animals. Her conservation experience includes working with cheetahs, lions, wolves and elephants in educational and rehabilitation programmes. Find out more about her work by clicking on the banner below.