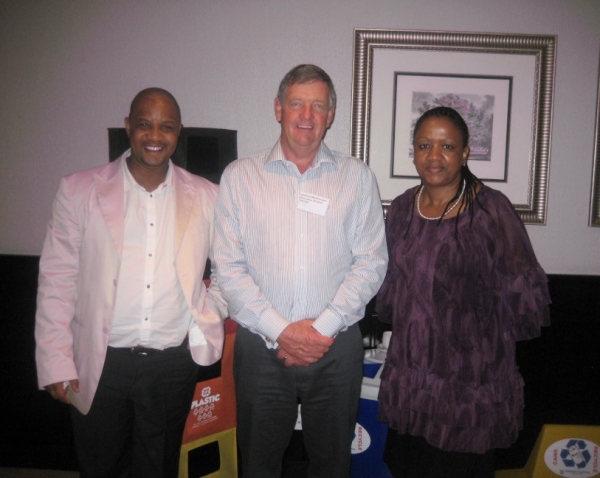 Of 1,3 million tons of plastic manufactured in our country, only 250 000 tons was recycled in 2011 – and most of that was post-consumer waste. This means that a big chunk more could have been recycled, according to Jacques Lightfoot, Sustainability Manager of Plastics SA.

He opened the Third Annual Waste Management and Recycling Conference held at the Birchwood Hotel in Boksburg recently. Industry experts and representatives of municipalities all weighed in to make this event a useful collaboration between different sectors, in an ongoing attempt to better waste management in South Africa and Africa, in general.

Lightfoot also spoke about why we started using plastic in the first place and explained that plastic is made of either coal or crude oil – two unsustainable natural resources that the general eco-friendly idea is to move away from. But, in South Africa alone, the plastics industry employs about 60 000 people, which makes it impossible to just, out of the blue, stop using plastic altogether.

This is why he, along with the other speakers, put great emphasis on bettering recycling processes, so that the process generates even more jobs and in turn helps the economy to grow, instead of only focusing in using less plastic products.

According to Lightfoot the two main challenges in recycling that need the most urgent attention is collection systems (we will need to do more than scavenger collectors with trolleys who sell “empties” to buy food) and sorting systems (since all plastic is not the same and cannot be reused together).

Interestingly, he mentioned ‘down gauging’ (a process whereby packaging is made of less plastic to do the same job) as a possible helping factor for the general population to use less plastic. However, Andrew Marthinusen, Executive Director of the Packaging Council of South Africa (PACSA) disagrees with this approach. Marthinusen showed in his presentation that the human population emitted 32billion tons of carbon dioxide (a major greenhouse gas) in 2010, proving, in his opinion, that organic waste (which can be blamed for a big part of this number) is a huge problem that needs to be addressed when speaking about recycling.

“Globally 1,2 billion tons of food are wasted and in the UK consumers throw away 30% of food they buy (of which 80% is still fit for consumption). In South Africa approximately 30% of agricultural production is wasted. All this organic matter, when allowed to enter a landfill site, will upon decomposing release a variety of dangerous gasses, among which methane, which,” Marthinusen says “is exponentially worse than carbon dioxide. Organic waste, however, is the easiest waste to recycle and in a perfect world no organic waste should be allowed to enter a landfill since it is fairly easy for anyone to turn their organic waste into compost.”

For a big part of the above mentioned wastage of food, Marthinusen blames the packaging the food was in. He is of the opinion that ‘down gauging’ is not the answer to plastic problems if it doesn’t sufficiently protect food and the food is then thrown out by a consumer who deems it damaged or no longer fresh enough to consume. The topic of his presentation was actually of a different nature, though, and he continued to speak about a ‘Draft Industry Waste Management Plan’ which the Council has presented to government and is waiting for a reply from.

The plan basically highlights three areas that it deems important in any attempt to bring about a significant country-wide initiative to implement effective recycling networks.

The plan states that:

In addition to this PACSA is also developing a guide for packaging designers to use so they will know which materials to use to create packaging that is fully recyclable.

Chris Liebenberg, Business Unit Manager at Worley Parsons, spoke about facilitating the improvement of waste management in Africa. Despite the fact that South African waste management organizations are still looking for ways to improve, South Africa can actually be an example to other African countries in this field. Africa has a population of approximately 1 billion people who produce about 230million tons of waste per year. As in many impoverished areas in Africa the main priority is food and shelter, waste management is not addressed.

“However, in 2012 six of the biggest growing economies in the world were in Africa. With increasing affluence, along with development, waste generation increases. It is vital that other African countries start paying attention to the safe disposal of waste.”

“There are two major waste management problems in Africa. The first is that European companies who have invested in a country build a landfill, but to European standards and not taking African conditions into account, which, in the end, leads to a useless landfill and wasted money. And secondly, uneducated government officials who have the power to allocate taxpayers money, but don’t see the need to spend it on waste management since waste production is hard to quantify and thus is often neglected at the lack if credible statistics.”

On this topic, an address by Dr Linda Godfrey from the Council for Scientific and Industrial Research (CSIR) was very relevant. She spoke about a research, development and innovation roadmap for the waste sector and highlighted the need for innovation in a more technologically demanding and profit reducing waste sector. The most important part of her address was undoubtedly the announcement of the launch of the Waste Sector Survey, which will attempt to quantify South Africa’s waste generation and so keep waste statistics updated.

Post-graduates to specialize in waste management

“This will play a significant supporting role in illustrating the importance of funding and implementing recycling initiatives,” she said. Godfrey also mentioned plans to work along with universities to implement a postgraduate degree specializing in waste management, with a big component being practical exercises, so that South Africa can grow a human capital of industry-ready experts.

This conference is undoubtedly a step forward in bringing together experts of a variety of components of the waste management sector in South Africa. And hopefully sustainable partnerships and information sharing will continue to spring forth from this pooling of waste management resources and brainpower in the future.