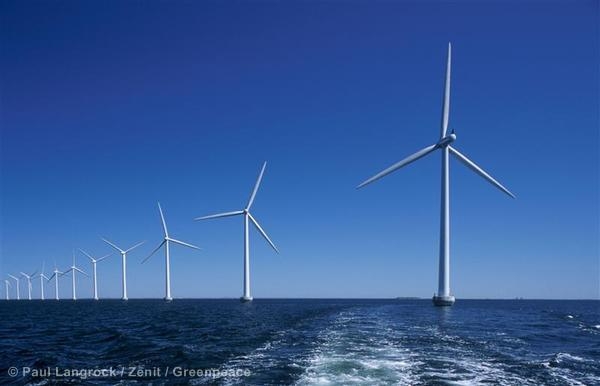 By 2020, the plan is to build a total of 143 wind turbines on platforms 16 kilometres off the coast of Fukushima, home to the stricken Daiichi nuclear reactor that hit the headlines in March 2011 when it was damaged by an earthquake and tsunami.

The wind farm, which will generate 1 gigawatt of power once completed, is part of a national plan to increase renewable energy resources following the post-tsunami shutdown of the nation’s 54 nuclear reactors. Only two have since come back online.

The project is part of Fukushima’s plan to become completely energy self-sufficient by 2040, using renewable sources alone. The prefecture is also set to build the country’s biggest solar park.

The wind farm will surpass the 504 megawatts generated by the 140 turbines at the Greater Gabbard farm off the coast of Suffolk, UK – currently the world’s largest farm. This accolade will soon pass to the London Array in the Thames Estuary, where 175 turbines will produce 630 megawatts of power when it comes online later this year. The Fukushima farm will beat this, too.

The first stage of the Fukushima project will be the construction of a 2-megawatt turbine, a substation and undersea cable installation. The turbine will stand 200 metres high. If successful, further turbines will be built subject to the availability of funding.

To get around the cost of anchoring the turbines to the sea bed, they will be built on buoyant steel frames which will be stabilised with ballast and anchored to the 200-metre-deep continental shelf that surrounds the Japanese coast via mooring lines.

Once the farm is running at full power, the intention is that it will supply electricity to the powerful grid which Fukushima’s two nuclear power plants were connected to, reducing transmission costs.

Project manager Takeshi Ishihara of the University of Tokyo insists that the area’s seismic activity won’t be an issue for the turbines. His team have carried out computer simulations and water tank tests to verify the safety of the turbines, not just in the event of an earthquake or tsunami, but in other extreme conditions such as typhoons too. “All extreme conditions have been taken into consideration in the design,” he says.

Another contentious issue is the facility’s impact on the fishing industry, which has already been rocked by the nuclear accident. Ishihara insists it is possible to turn the farm into a “marine pasture” that would attract fish. While there was some objections to the project by local people, Ishihara says is confident he has won them round. “This is hard work, but will be resolved this month,” he says. “This project is important – I think it is impossible to use nuclear power in Fukushima again.”