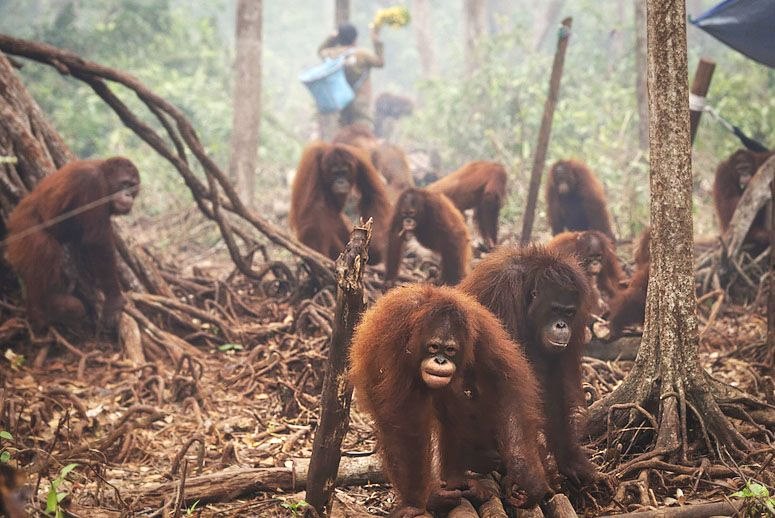 Indonesia is on fire. Right now, tens of thousands of small forest fires are burning across the islands of Sumatra and Borneo, the only habitats for orangutans and other rare species. Many of the fires appear to have been intentionally set by palm oil companies, which employ slash-and-burn agriculture to clear land of native trees to plant their cash crop, which is used as an ingredient in everything from food to cosmetics.

Richard Zimmerman, executive director of Orangutan Outreach, calls the conflagrations a disaster for endangered orangutans. Some of the fires are burning in important orangutan habitats, including Borneo’s Sabangau National Park, thought to hold the largest wild population of orangutans. “This is catastrophic,” Zimmerman said. He said he’s worried about how many wild orangutans have died from the flames and resulting smoke.

Fires out of control due to El Nino and animal suffocate

“The problem with fire and smoke is absolutely dire,” said Lis Key, communications manager for International Animal Rescue, which runs a rehabilitation center for more than 125 injured and orphaned orangutans in Ketapang, Borneo.

“Wild orangutans and orangutans in centers like ours are badly affected by the smoke,” she said. “Some suffer upper respiratory tract infections, which can even prove fatal. Some of the babies we’ve taken in recently have been suffering not only from dehydration and malnourishment through lack of food but also breathing problems from the polluted air.”

No matter where the fires are, they have raged out of control owing to an abnormally dry and windy season caused by El Niño weather patterns. Zimmerman said the situation is similar to that in drought-plagued California, where forest fires have grown in frequency and intensity over the past few years.

Indonesia’s fires are much worse than California’s, however. Not only are they deliberately set, but many of them occur in carbon-rich peat forests. These forests—which would normally be wet and hard to burn at this time of year—grow out of several meters’ worth of damp, rich organic matter instead of soil. Zimmerman said the peat forests are so dry this year that “one match or a cigarette would let it all go up in flames.”

Not only does this release more carbon than normal forest fires, but it makes fires harder to control. “Even if things look fine, there are actually fires burning 20 feet below the ground,” Zimmerman said. “You have these teams of people doing their best to extinguish small fires or hot spots, but the fire can come back up 100 meters behind them. It’s a constant vigil.”

Orangutans have more to fear than just the fire. The flames and smoke are pushing them out of their already reduced habitats and closer to human villages, where the adults are killed and the young apes are sold into the pet trade. In the past week, International Animal Rescue saved one such young orangutan, Gito, who had been kept in a cardboard box and left in the sun to die.

Two more young orangutans were repatriated to Indonesia this week after they were rescued from smugglers at the airport in Kuala Lumpur, Malaysia. A report last year from the Great Apes Survival Partnership found that many illegally obtained orangutans and other apes are being sold to China for display in zoos and other entertainment facilities.

Although most adult orangutans that escape the fires are killed by poachers, a few are luckier. Key reported that her group recently relocated 10 wild orangutans that had been found “stranded close to palm oil concessions or in areas of forest that have been destroyed by fire.”

The fires threaten more than just Indonesia’s wildlife: They have also created a cloud of smoke and haze big enough to be seen from space and are releasing an estimated 15 to 20 million tons of carbon dioxide per day—more than the emissions from the entire U.S. economy. “This isn’t just one little fire in one little area,” Zimmerman said. “It’s the whole earth.”

And there’s no end in sight. Malaysia’s environment minister this week warned that the Indonesian fires are so bad that human efforts can’t control them until the rainy season begins in mid-November, if then.

Still, Zimmerman said his group is collecting funds to help support villagers, firefighters, and local conservation organizations. After that, it will start surveys to see how many orangutans have been lost. “When these fires finally end, that’s when we’ll see the bodies,” he said.

These vulnerable animals need your help. In The Operatives, Pete Bethune and his team of extreme conservationists fight for oceans, for forests, and for wildlife, but they need your help. Find out more here.