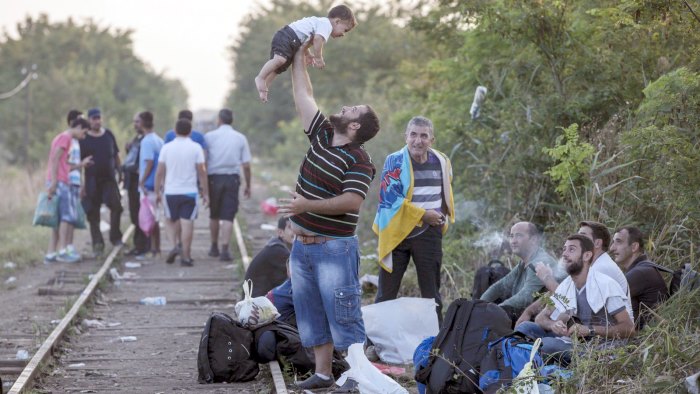 Last week saw yet another horrible development in Europe’s refugee crisis: the discovery of 71 bodies in an airless truck, abandoned by an Austrian highway.

But the tragedy seems to have galvanized an uprising. Yesterday, Austrians took to the streets in Vienna, to say that they don’t want Europe to become a “mass grave” for people fleeing conflict in other parts of the world.

I don’t want Europe to be a mass grave

At least 20,000 people marched, some holding banners that read “Refugees welcome” and “I don’t want Europe to be a mass grave.”

It’s part of a grassroots movement across the continent in which citizens tired of government inaction—and in some cases, brutality—are taking it upon themselves to help mitigate the suffering of those who have crossed into their countries.

In Germany, football crowds raised banners in support of refugees. Germany is bearing a much greater share of the burden than any other country in Europe, and expects as many as 800,000 refugees this year, which has led to pockets of tension.

Many acts of kindness happening

But it has also inspired many acts of kindness. Ranga Yogeshwar, a German journalist, goes to the makeshift refugee center—a sports hall housing 150 people in his local town of Hennes, near Cologne—almost every day. Yesterday, on a brief trip to Berlin, he darted into a bookshop to buy German-Arabic textbooks to take there next time he goes. He says that as a German who cares deeply about his fellow humans, he’s far from an exception—he’s part of the majority.

“If you looked at news in Germany you would just see the dark side of Germany,” he said, mentioning coverage of attacks on refugee accommodation in the German media (link in German). But “this does not reflect the reality, because the majority of Germany people are open-minded,” he said. A Facebook message he posted last week, describing his experience in Hennes, seems to bear that out: It has been read by two million people so far, and liked more that 25,000 times.

Refugees to be housed in normal flat-shares

Two fellow Germans, a couple from Berlin, have set up a site that aims to re-house refugees in normal flat-shares, paying their rent and utility bills via crowd-sourced donations. The site, Refugees Welcome, says it has already re-homed 122 refugees in flats in Germany and Austria whose occupants signed up to the site.

In Calais, France, an unofficial camp of migrants and refugees has been building up around the port town, and thousands have tried to cross to the UK via trucks, cars, and trains in recent weeks—and at least one even tried to walk through the Channel Tunnel.

Unable to sit back and watch, people from the UK have begun making unofficial humanitarian missions, loading up cars with donated food, clothes and toiletries, and driving from Dover, in the south of England, through the tunnel to Calais. At the French camp—known locally as the Jungle—teachers are volunteering (link in French) to teach French in a school built by refugees.

Mona Dohle and Syed Bokhari, a couple living in West London, drove a van full of supplies to Calais in August, and have set up the London2Calais group to arrange a “solidarity convoy” in October. Other people have had the same idea. Yesterday, an email sent out about collecting for a delivery to Calais asked for specific items including small and medium coats and blankets. People collecting for a center in Germany put out a call for smaller mens’ shoes, because donated German shoes run too large for many of the men who need them.