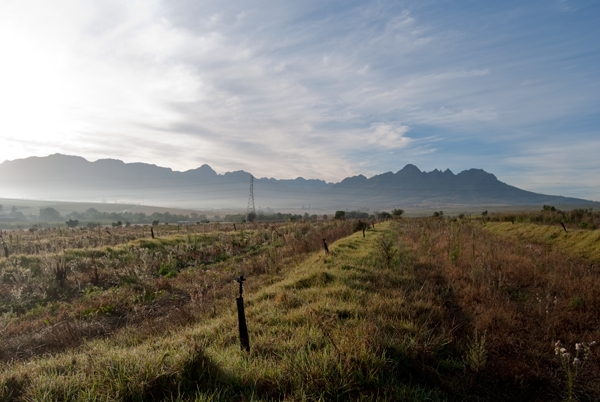 I first heard about Vredenhof from someone who’d had a heart attack and who was nourished back to health on their vegetables. His story inspired me to go and visit.

Vredenhof Organic Estate is a 27 hectare fruit and vegetable farm situated between Somerset West and Stellenbosch. It is a world in itself once you’ve passed through the gates. The owners, Trevor Blench and his wife Isabella are Swiss, and the farm manager Hugh Gordon is Scottish. They form a synergistic team; Hugh does the farming, Isabella the quality control, and Trevor oversees things with precision.

Their aim is best quality, and they won’t compromise on it.

‘We want to offer people the most nutritious produce possible from healthy soil.’

Nothing is spared in achieving this. As very little organic seed is available locally they import 50% from overseas, at 10 times the cost. They naturally buy certified organic compost, but in addition have free-range Fair Cape cow manure added according to exact ratios to meet the soil’s needs, again at extra cost. Despite these outlays, their prices are on a par with conventional produce – sometimes slightly above or below.

‘It’s a myth that organic has to cost much more, organic farmers and shops really exploit that notion,’ Isabella said.

She does market research twice a year and believes in keeping prices constant and affordable. Neither does organic produce have to be small or blemished, which we have largely been led to expect. This point really ignited Isabella’s passion.

‘It’s absolutely not true and is simply bad farming. Damaged leaves and blemished produce should be discarded at the packing shed, which is what we do. Organic produce should not only taste better but also look better than any other,’ she said.

Vredenhof lay fallow for eight years before the Blench’s bought it, so certification has been straightforward. In addition to the Afrisco-EcoCert certification, they have also been accepted for the Swiss certification (SGS) which they wanted for its exacting standard and follow up.

Hugh took us on a walk around the farm. The raised beds and plants were picture perfect.

‘We feed the soil with compost continuously, weeding is done by hand with no chemical sprays, and companion planting is used to deter pests. In contrast, the spraying in conventional farming kills micro-organisms so that the soil is just an empty prop for the plant, which has to be fed chemically.’

As we walked he picked sweet mange-tout for tasting, pointed out a ladybird, and dug his hand deep into the soil to show me the beautiful crumbly texture.

‘In a normal farm the soil is compacted hard,’ he said. The water in the dam comes from a 150 m borehole and is translucent.

‘It has been tested for purity; we give the plants the same water we drink, which contributes to their quality.’

The farm includes some pigs and cows, which grow far larger than their commercial cousins because of the ideal life they lead. One of their cows reached 1.2 tonnes! The animals eat all the discarded produce from the pack shed and graze free range. The pigs respond to Isabella’s voice, and their stall was odour-free.

‘Isabella tucks them in every night herself,’ Hugh said wryly.

The animals eventually provide everyone on the farm with the highest quality organic meat.

The packing shed was as clean and efficient as the rest of the farm.

‘I wanted a very simple design,’ Isabella said, ‘because I don’t like complicated things. So the veg comes in here, is cleaned, packed, sealed, and goes out there.’

Her son made the wooden benches in the pack shed from a tree that had fallen on the farm. Isabella runs a small outlet on the farm which is open on Wednesdays from 10 to 3.30. Produce is picked that morning.

‘If I run out of broccoli I ask the client to wait 10 minutes while we go into the field to pick some more.’

In addition to seasonal fruit and vegetables, their son, a chef, sells bread and tapenade made from their olives. A farmstall with a 220 m2 kitchen is being built and is a work in progress close to their hearts and intended to make their produce more available to the community. When asked about the benefits of eating organically the reply was unhesitating:

‘We haven’t been to a doctor in decades, Trevor is 63 and climbs Helderberg Mountain every weekend, and we all have high energy levels and love what we do. For us organic is a way of living.’

With regard to challenges, they said that committed labour was a difficulty – not that this had to do with organic farming, rather with labour law. The effect according to them was that it encouraged farmers to mechanise, whereas being an organic farm they depended on labour for manual processes such as weeding. They have invested in human capital and a committed team.

Other than straight off the land, Vredenhof produce can be found in most local Spars in Somerset West and Stellenbosch, and well as Giovanni’s in Seapoint, the Seapoint Spar, and the two Wellness Warehouses in Cape Town. Produce is harvested on the morning of delivery. Vredenhof is the first organic farm that I’ve visited. I’m glad, because it provides a high benchmark.

‘We would like to be the best organic farm in the country,’ Isabella said smiling.