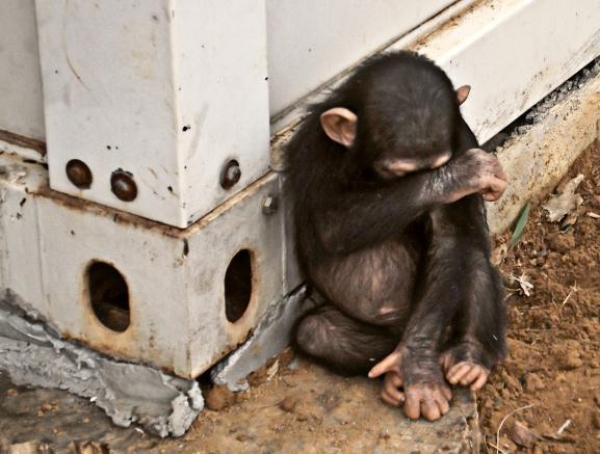 An infant Chimpanzee in Equatorial Guinea (orphaned by the illegal Bushmeat Trade) has been safely rescued, thanks to phenomenal teamwork, advice, coordination and assistance from a South African stationed in Equatorial Guinea, as well as two caring organisations.

The Jane Goodall Institute South was initially scheduled to rescue and bring the infant to its South Africa Chimpanzee Eden Sanctuary, but was unable to do so due to various challenges. Thanks to swift action and assistance from Julie Sherman (PASA Executive Director), Anton Smit and the Ape Action Africa Team, the CITES Permits were changed with assistance from JGI SA (Phillip Cronje and David Devo Oosthuizen). The infant Chimpanzee was rescued by Ape Action Africa and taken to safety at its sanctuary in the Mefou forest (Cameroon) managed by Rachel Hogan and Bibila Tafon (Babs).

This case illustrates just how powerful and effective swift cooperation and coordination between the Pan African Sanctuary Alliance can be. In Africa, there are 22 PASA Sanctuaries dedicated to the rescue, rehabilitation and conservation of primates, rescued from the illegal Bushmeat Trade and illegal Pet Trade.

a sanctuary for chimpanzees

The Jane Goodall Institute South Africa Chimpanzee Eden is a sanctuary for chimpanzees
rescued from the illegal pet-and-bushmeat trades and the entertainment industry. The sanctuary
is a joint venture between The Jane Goodall Institute South Africa (a non-profit NGO who look
after the welfare of the chimpanzees) and Umhloti Primate Park (Pty) Ltd (a corporate vehicle of
the Cussons family who manages the sanctuary tourism and operations).

NGO cares for more than 300 primates

Ape Action Africa is a non-profit NGO founded in 1996 dedicated to the conservation of endangered gorillas and chimpanzees, threatened by the bushmeat trade in Central and West Africa. Ape Action Africa manages the rescue and rehabilitation of Great apes across much of Cameroon, with a large sanctuary in the Mefou forest. With more than 300 primates in its care, Ape Action Africa is now one of the largest conservation projects of its kind in Africa. Many of the animals arrive at the sanctuary as orphans, mainly due to the illegal bushmeat trade, which has grown in recent years as a result of deforestation of the Cameroonian jungle. At the frontline of the organisation is Rachel Hogan (originally from Birmingham) and Bibila Tafon (Babs) who live full time in the jungle as the managers of the Mefou National Park.

the highest standards of care

PASA (Pan African Sanctuaries Alliance) aims to stem the flow of orphaned, injured and displaced primates in Africa; ensure the
highest standards of care are provided to those already in sanctuaries; and to work closely with
governments and local communities to protect wild primates and their habitat.

Find out more about PASA here.