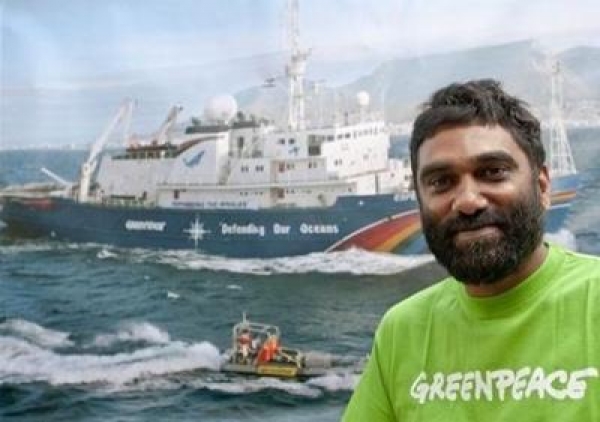 The International Executive Director of Greenpeace, the South African Kumi Naidoo, has been arrested and is being flown to Greenland after breaching an exclusion zone and scaling a controversial Arctic oil rig 120km out to sea.

At 6.45am last Friday morning an inflatable speedboat carrying Naidoo was launched from the Greenpeace ship Esperanza. The rig’s operators Cairn Energy used powerful water cannon to try to prevent him climbing a 30 metre ladder up the outside of one of the rig’s giant legs, but Naidoo braved the freezing jets and made it to the platform.

Soaking wet he demanded that Cairn immediately halt drilling operations and leave the Arctic. He also sought a meeting with the Master of the rig so he could present the names of 50,000 people from across the world who have emailed Cairn to demand they publish the rig’s secret oil spill response plan. The document has been at the centre of a month-long campaign of direct action in the Arctic.

Just before he was arrested Kumi Naidoo radioed the Esperanza, saying:

“It looks like I’m being arrested now. They say I’m going to be taken to Greenland, but what happens after that I don’t know. I did this because Arctic oil drilling is one of the defining environmental battles of our age. I’m an African but I care deeply about what’s happening up here. The rapidly melting arctic sea ice is a grave warning to all of us, so it’s nothing short of madness that companies like Cairn see it as a chance to drill for the fossil fuels that got us into this climate change mess in the first place. We have to draw a line and say no more. I’m drawing that line here and now in the Arctic ice.” 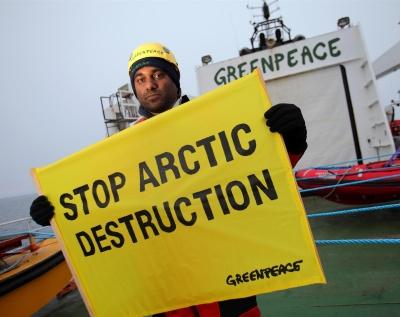 As the helic+opter that was sent to collect Naidoo and his fellow activist, Ulvar Arnkvaern, departed the rig, Ben Stewart onboard the nearby Greenpeace ship Esperanza said:

“After over a month of non-stop action to stop dangerous deep water drilling in the Arctic, which has seen 22 Greenpeace activists including Kumi arrested after braving freezing seas to protest against Cairn’s reckless drilling, it is time to move the campaign up a gear and out of the Arctic.”

“We are now leaving the area and taking the campaign against dangerous Arctic oil drilling to other places, and that’s where we’ll be for the rest of the year. The next stage of the campaign will be a scientific tour around Greenland to investigate climate impacts that are already under way. We will continue to push for the disclosure of the secret oil spill response plan through our complaint to the Greenland Ombudsman, under UK law, and through Cairn’s shareholders.”

“This is far from over. The battle to stop Arctic oil drilling has only just begun. A movement is building against this madness, one that will challenge the oil companies at every turn until they are locked out of the Arctic. These are critical years, ones in which the struggle to prevent the worst effects of climate change will be won or lost. The Arctic will be right at the heart of that struggle. The melting ice is a warning, and if we have the wisdom to heed it a bright future is still possible.”

Kumi, 45, was a youth leader in the anti-apartheid movement in South Africa, where he was arrested several times and charged with violating provisions against mass mobilisation, civil disobedience and for violating the state of emergency. He lived underground before being forced to flee South Africa and live in exile in the UK.

As you read this, our Global Director, Kumi Naidoo, remains in jail in Greenland. It looks like he will be released on either Tuesday or Wednesday.

He took with him a petition signed by 50,000 people. The petition calls on Cairn Energy to publish their oil spill response plan. So far the company has refused, probably because they know an Arctic oil spill would be near impossible to deal with.

You can also watch this video of Kumi’s action and share it with your friends:

As he left to climb the rig, Kumi had this to say:

This is one of the defining environmental battles of our age. It’s a fight for sanity against the madness of those who see the disappearance of Arctic sea-ice as an opportunity to profit. If we don’t stop them, the oil companies will send in the rigs and drill for more of the fossil fuels that got us into this mess in the first place – in a place where the cost of a spill is unimaginable.

We have to draw a line somewhere, and I say we draw that line here today.
Thanks so much for your support in this battle, we really need you with us.

P.S. Yesterday Kumi’s daughter sent a letter to Kumi for father’s day. He managed to send a reply earlier.