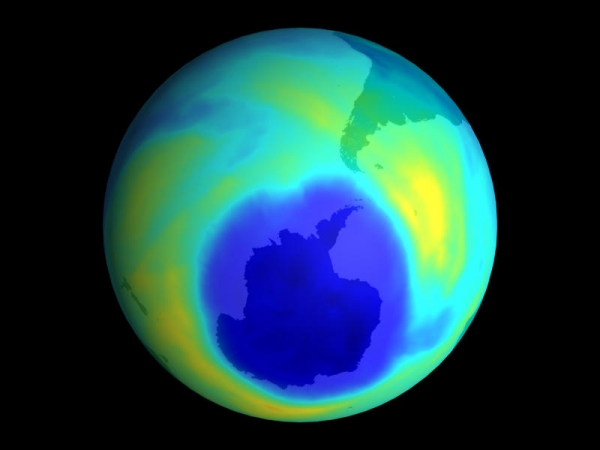 A lot of people mix up the ozone hole and global warming, believing the hole is a major cause of the world’s increasing average temperature. Scientists, on the other hand, have long attributed a small cooling effect to the ozone shortage in the hole.

Now a new computer-modeling study suggests that the ozone hole might actually have a slight warming influence, but because of its effect on winds, not temperatures. The new research suggests that shifting wind patterns caused by the ozone hole push clouds farther toward the South Pole, reducing the amount of radiation the clouds reflect and possibly causing a bit of warming rather than cooling.

“We were surprised this effect happened just by shifting the jet stream and the clouds,” said lead author Kevin Grise, a climate scientist at Lamont-Doherty Earth Observatory of Columbia University in New York City.

Grise notes this small warming effect may be important for climatologists trying to predict the future of Southern Hemisphere climate.

The work is detailed in Geophysical Research Letters, a journal of the American Geophysical Union. Grise collaborated on the study with Lorenzo Polvani of Columbia University, George Tselioudis of NASA Goddard Institute for Space Studies, Yutian Wu of New York University, and Mark Zelinka of Lawrence Livermore National Laboratory.

Hole in the sky

Each ozone molecule consists of three oxygen atoms bound together. These ozone molecules gather in the lower portion of the stratosphere about 20 to 30 kilometers (12 to 19 miles) above the ground – about twice as high as commercial airliners fly.

Thankfully for the living things below, this layer of ozone shields Earth from some of the hazardous ultraviolet radiation barraging the atmosphere. Unchecked, these ultraviolet rays can cause sunburns, eye damage and even skin cancer.

In the 1980s, scientists discovered thinning of the ozone layer above Antarctica during the Southern Hemisphere’s spring months. The cause of this “hole” turned out to be chlorofluorocarbons, such as Freon, from cooling systems, aerosols cans and degreasing solvents, which break apart ozone molecules. Even though the1987 Montreal Protocol banned these chlorofluorocarbons worldwide, the ozone hole persists decades later.

An actual consequence of the ozone hole is its odd effect on the Southern Hemisphere polar jet stream, the fast flowing air currents encircling the South Pole. Despite the ozone hole only appearing during the spring months, throughout each subsequent summer the high-speed jet stream swings south toward the pole.

“For some reason when you put an ozone hole in the Southern Hemisphere during springtime, you get this robust poleward shift in the jet stream during the following summer season,” said Grise. “People have been looking at this for 10 years and there’s still no real answer of why this happens.”

The team of scientists led by Grise wondered if the ozone hole’s impacts on the jet stream would have any indirect effects on the cloud cover. Using computer models, they worked out how the clouds would react to changing winds.

High- and mid-level clouds, the team discovered, traveled with the shifting jet stream toward the South Pole and the Antarctic continent. Low-level cloud coverage dropped in their models throughout the Southern Ocean. While modeling clouds is a difficult task due to the variety of factors that guide their formation and movement, Grise noted that observational evidence from the International Satellite Cloud Climatology Project, a decades-long NASA effort to map global cloud distributions, supports their theory of migrating cloud coverage.

When the cloud cover moves poleward, the amount of energy the clouds can reflect drops, which increases the amount of radiation reaching the ground. “If you shift the reflector poleward,” Grise explained, “you’ve moved it somewhere there is less radiation coming in.”

In 2007, the Intergovernmental Panel on Climate Change reported a direct cooling effect from the thinning ozone layer – specifically, a reduction of about 0.05 watts per square meter’s worth of energy reaching the ground. However, Grise and his colleagues estimated the indirect effect of the shifting cloud coverage to be an increase of approximately 0.2 watts per square meter. Their result not only suggests that warming rather than cooling would be taking place, but also that there’s a larger influence overall. Since the jet stream only shifts during the summer months, the warming only takes place in those months.

“Theoretically this net radiation input into the system should give some sort of temperature increase, but it’s unknown if that signal could be detected or what the magnitude of it would be,” said Grise. For comparison, worldwide, an average of about 175 watts per square meter reaches the ground from sunlight, according to the George Washington University Solar Institute.

Dennis Hartmann, an atmospheric scientist at the University of Washington in Seattle unrelated with the project, points out that since predicting cloud behavior is so challenging, the model used in Grise’s study could be underestimating clouds north of the jet stream being pulled toward the equator and in turn reflecting more light, potentially reducing or even negating the warming effect. Hartmann added that he also has some concerns about the modeling of the low-level cloud response.

Still, “this is certainly a very interesting topic and potentially important from a practical perspective of predicting Southern Hemisphere climate and even global warming rates,” he commented.

Looking toward the future, the jet stream should do less and less shifting to the south during the summer months as the ozone layer above the South Pole recovers. However, increasing levels of greenhouse gases can also change mid-latitude wind patterns and push the jet stream poleward, creating a complicated scenario which Grise said he plans to study in future work.

“You have sort of this tug-of-war between the jet being pulled equator-ward during the summer because of the ozone recovery and the greenhouse gases pulling the jet further poleward,” said Grise. “What the clouds do in that scenario is an open question.”

Funding for the research was provided by the National Science Foundation and by the U.S. Department of Energy’s Office of Science.